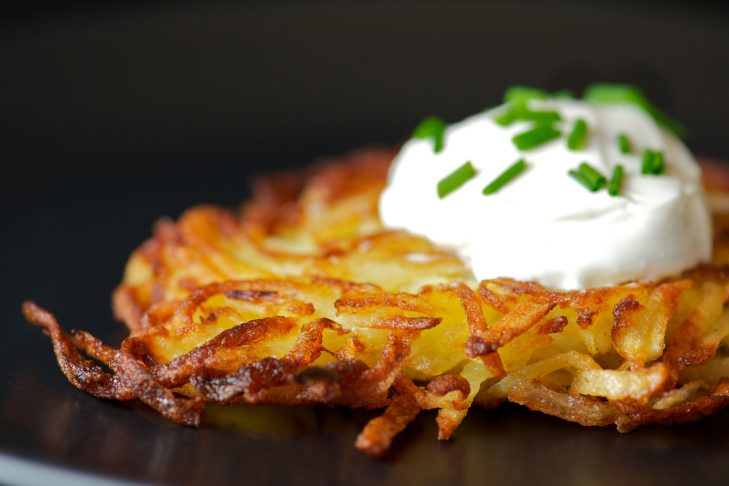 This was originally going to be a review of Boston’s top frozen latkes.

However, kind reader, this assignment proved far more difficult than I anticipated. Why? Because many of Greater Boston’s better-known supermarkets do not carry latkes. I know. I was shocked, too.

On the happy side, I also discovered several delicious latkes that I’m happy to rhapsodize about.

So if you prefer to buy latkes instead of making your own this holiday season, here’s a handy guide. Don’t leave home without reading it: You might find yourself staring down a very confused stock-person who thinks you want frozen waffles.

If you’re really serious but also lazy, you can special-order latkes and have them shipped to your door. What a wonderful world! I sampled two.

Linda’s Gourmet Latkes: Linda’s is awesome if you have many friends. It sells bite-sized latkes, 48 per package. The box suggests topping them with caviar. If you’re just a tired person in need of a snack and can’t get your hands on caviar in a hurry, they’re perfectly all right on their own. But be forewarned: They look and taste more like potato puffs than latkes. Upon cooking, the exterior expands outward like a flaccid balloon, leaving a pouch of air between crunchy coating and potato within. 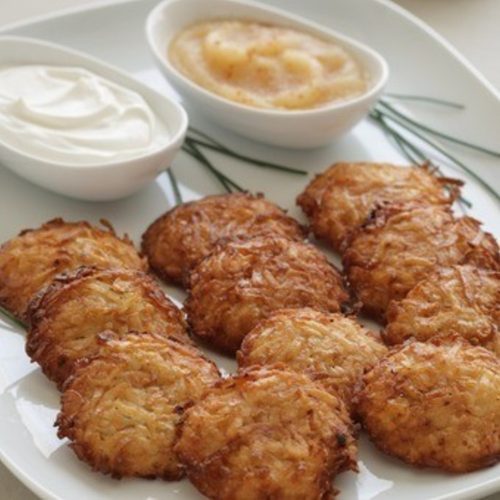 Takeaway: OK for a snack, but not your traditional latke.

Zabar’s Potato Pancakes: If you’re getting latkes sent to your own home, you might as well go with the best. Zabar’s, the classic Upper West Side smoked fish emporium, doesn’t disappoint. The latkes are salty and peppery, golden and a touch oily, with craggy edges and plenty of mealy potato within. Is it as good as strolling down Broadway with a piping hot pancake in your mitt? No. But this is pretty close. Plus, the shipment comes with a jaunty little Zabar’s tote bag, which is a thoughtful touch. Do note: These require a lower and longer heating time (300 degrees for 15 minutes) as compared with other frozen types. 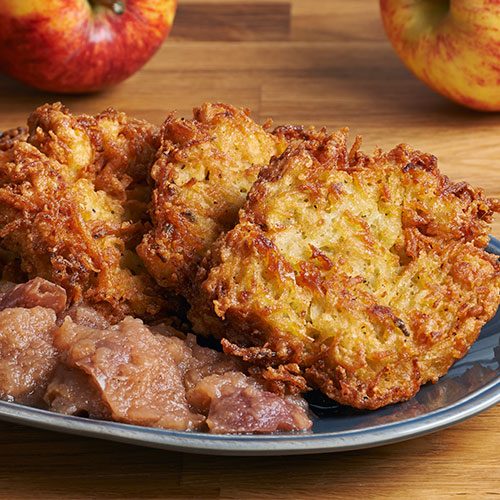 Takeaway: Did you really think something from Zabar’s would be bad?

Wegmans: One would think that the Chestnut Hill Wegmans would stock latkes. They have subs, salads, sushi, and a person whose job it is to offer samples of cannoli. However: You will brave the crowds, and you will be sorely disappointed. I approached two staffers about latkes. The first person had absolutely no idea what I was talking about. The second fellow gamely led me down a corridor toward a kosher section filled with Golden-brand vegetable pancakes and zucchini pancakes…but absolutely no potato ones. At this point, the poor guy got on his walkie-talkie and began strategizing with people in other aisles. Maybe they were misplaced? Maybe they’d been moved to another section? Nope. They just didn’t have them. I grabbed a slice of pizza from the hot bar and ran away.

Texture: Crushed. As in my heart.

Takeaway: Do not brave this parking lot if you believe in peace on earth.

Whole Foods: If not Wegmans, then surely Whole Foods? This was an even sadder experience. The frozen case yielded no results. A stocker looked at me pityingly and pointed me in the direction of the to-go area. There was plenty of mac and cheese, orzo salad and quinoa. But latkes? Nope. “We’ll get some closer to Hanukkah,” a staffer told me with a smile.

Takeaway: Better for $20 slivers of soap.

Stop & Shop: Feeling grim, I then proceeded to my local Stop & Shop. I had low expectations. This is a place where I once got a puzzled look when asking for an avocado. And, true enough, things started on a rocky note. I strolled to the frozen aisle and asked a staffer about latkes. She looked confused. “Potato pancakes,” I explained. “You want pancakes? Pancakes? This girl wants pancakes!” she yelled across the aisle. (Remember that scene in “The Golden Girls” where Rose is looking for condoms? This is how I felt. Completely outed.)

“Pancakes?” her colleague shouted back. “Waffles?”

“No, not pancakes, like with syrup,” I hissed. “Latkes! Potato pancakes!”

This continued for another minute or so until she pointed me toward a case brimming with Golden-brand potato pancakes.

This was the good news. The bad news is, they tasted like oily hockey pucks. 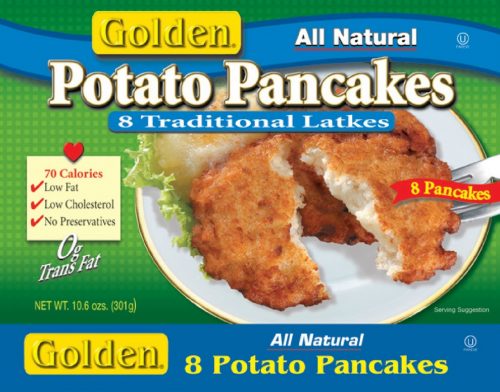 Takeaway: Not worth the humiliation.

Trader Joe’s: At long last, love. Trader Joe’s had store-brand latkes in stock by Thanksgiving. They were meaty and crisp, with reassuring golden charred edges and a comforting, mealy center. And they only took 15 minutes in the oven! If you must go frozen, opt for these. 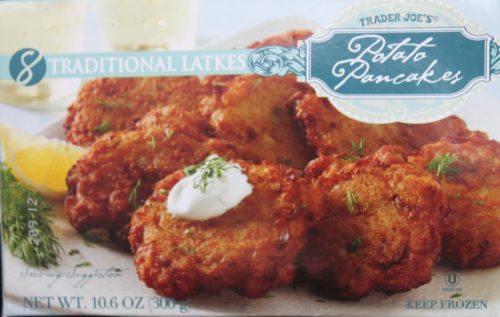 I’m going to spare you further suspense and let you know that neither BJ’s nor Costco carry latkes, according to phone calls to both establishments. Apparently bulk carbs aren’t big sellers.

So, if you’re really craving latkes, the best solution is to go to a restaurant. I know, I know. But how can you serve them at your Hanukkah party? Just take them to go. As someone with a week’s worth of intensive latke-tasting experience, I can almost guarantee you that they’ll taste better than anything frozen. I dined at three establishments.

Inna’s Kitchen: This Jewish food stall inside the Boston Public Market sells a dish called the shakalatke. Fun to say, and fun to eat! Two potato pancakes topped with poached eggs, doused in a chunky tomato sauce, topped with sliced avocado. Ask for yours with a side of zhoug, a spicy green relish made with coriander, chile and garlic. There’s also a dollop of sour cream to help you cool down. The latkes are secondary, mere vehicles for the eggs and sauce, but you won’t mind. Everyone at the market was wolfing down this dish. 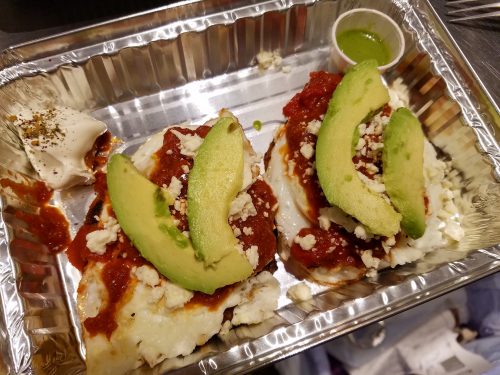 Takeaway: A sumptuous brunch. You can also buy plain old latkes to go. But eat this first.

Mamaleh’s: Ah, Mamaleh’s, that rare Jewish deli where you can take your grandma, your kids or a second date. Get an adult portion with applesauce, sour cream and caviar, or opt for a kid-size with two pancakes (hold the fish eggs). This version has toothsome potato strands on the inside and a slightly smoky exterior that crests slightly outward in the center, with ragged, lightweight edges. Just the right amount of grease, easily ameliorated with sour cream. A hearty meal, served by a very pleasant chap who said they’d also happily deliver. 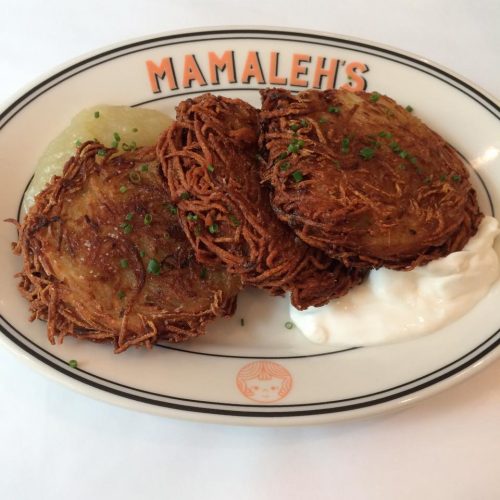 Michael’s Deli: A narrow Brookline deli on the edge of Coolidge Corner, Michael’s gets points for efficiency and structural integrity. I bolted in, asked for a latke to go and no questions were asked. It was handed over wrapped in black plastic, like contraband, with some quick instructions from a friendly dude in an apron: “A few minutes under the broiler, and you’ll be good.” Done. It was sturdy, turgid on the outside and densely creamy on the inside, and remarkably oil-free. 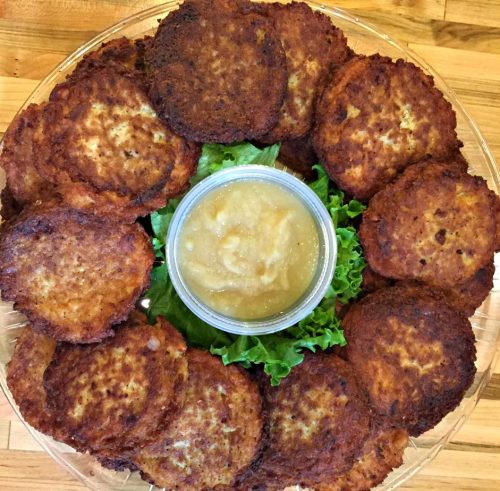 Takeaway: Quick and stress-free. Nobody looked askance at a frazzled woman demanding a latke, fast. Seems like it happens there often.

And there you have it. Where did I miss? Where do you buy latkes? Do you make your own? Tell me your secrets! I’m going on a week-long diet.