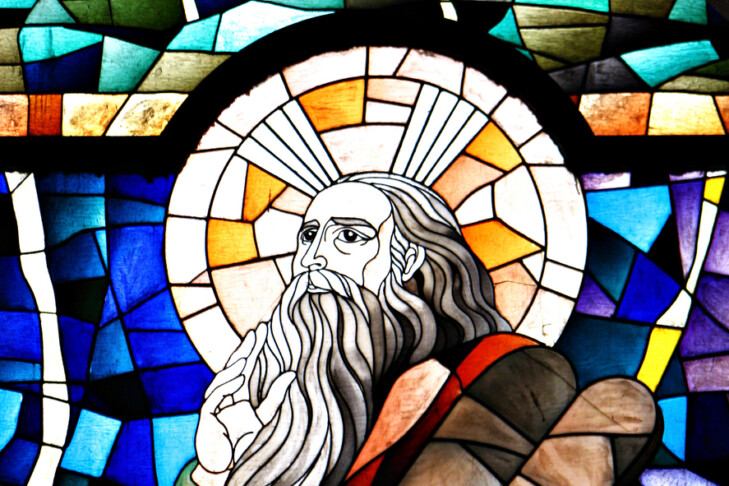 (Photo: audio-science/iStock)
Every Passover, Jews set an extra cup of wine on the dinner table and open the door for the enigmatic prophet Elijah, hoping he will enter.

An evolving symbol of hope and redemption in Judaism over the centuries, Elijah’s return is said to mark the messiah’s earthly arrival.

A harbinger of the messiah is a strange role for Elijah.

As scholar Daniel C. Matt (Brandeis University, class of 1972) shows in his new book, “Becoming Elijah: Prophet of Transformation,” Elijah starts out in the Bible’s Book of Kings as an impassioned firebrand whose zealotry even tests God’s patience.

Post-Bible, the rabbis spent centuries debating what to make of him. At various times, they imagined him roaming the earth in the guise of a Roman, an enslaved person and even a good-natured prostitute before deciding he was the savior of the Jewish people.

It wasn’t even until the 11th century that the Passover tradition of welcoming Elijah appears in the historical record.

Matt, a renowned authority on the Kabbalah and a retired professor at the Graduate Theological Union in Berkeley, California, spoke to Brandeis University’s The Jewish Experience about Elijah’s changing role in Jewish history.

What does the Bible tell us about Elijah?

He first appears as a zealous prophet for God. There’s something wild and primeval about him. He’s totally committed to monotheism. [Elijah’s name means “Yahweh is my God” in Hebrew.]

In that period [9th century BCE], a good number of the Israelites were wavering in their faith. King Ahab of Israel really wanted to have it both ways, worshiping the Israelite God and [the Canaanite god] Baal.

So, Elijah was out to defeat idolatry, but he didn’t entirely succeed. Dejected, he asked God to take his life. He went to Mount Sinai where he had an encounter with God, and God said, “What are you doing here, Elijah?”

This may imply, “You should be with your people. Why did you run off here to the desert?” Then God instructs him, “Go appoint your successor.” The rabbis take that to mean, “You’re fired.” He’s the only prophet in the Bible who’s fired!

He’s basically a zealot who is a little too much for the world to handle.

But the Jews certainly don’t forget about him.

It takes a few hundred years to develop. In the Book of Kings, Elijah is taken up to heaven in a whirlwind, in a fiery chariot. But it’s not clear if that means he dies a spectacular death in the chariot or lives and goes to heaven.

But in the book of Malachi [the final prophetic book in the Bible], it later says Elijah’s going to announce the End of Days. So, the rabbis assume that he’s taken alive to heaven. But, for the rabbis, he’s too extreme. So, he gradually becomes depicted in rabbinical texts as a compassionate hero.

He’s still zealous, but now he’s zealous to right wrongs. He’s zealous to help the poor. He can’t stay away from Earth when somebody is in trouble.

And you see that reflected in the Talmud, the rabbinical teachings compiled in the 5th century CE?

Yes, there are dozens of stories about how rabbi so-and-so met Elijah or studied Torah with Elijah, or Elijah came to him and gave him advice.

Do you have a favorite?

The wildest one is where Rabbi Meir is in trouble with the Romans. His sister-in-law is condemned to spend her life in a Roman brothel, and he rescues her. The Romans put a picture of Rabbi Meir on the gates of Rome that says, “Wanted: Dead or Alive.”

But just as the Roman soldiers are about to catch the rabbi, Elijah shows up in the guise of a prostitute and embraces him. The Romans see this and say, “This can’t be Rabbi Meir! He wouldn’t have done that.” So he escapes!

Yes, Elijah is constantly shape-shifting. He can turn into anyone depending on what’s needed at the moment. In the post-biblical stories, the Talmud and Jewish folklore, he can become a horseman, a Roman official, a Persian, a slave. He attends every seder, every bris. He’s the embodiment of ruach [Hebrew for life spirit].

To what extent do you think the Jews were scrounging around for a messiah figure and just decided Elijah would fit the bill?

How does Elijah become associated with Passover?

There’s never a mention of Elijah at the seder described in the Torah or in the Talmud and nothing in those texts about pouring a cup of wine for him or opening the door.

But there is an early folk tradition to open the door based on the line near the beginning of the Haggadah: “Let all who are hungry come and eat.”

Then in the 11th century, a rabbi says, “Passover is a time of redemption, and the messiah is the ultimate redemption, so we’re leaving the door open because we hope Elijah will come, and we want to make sure we go out to meet him right away.”

Then the next stage is, “Okay, if he shows up, he’ll come in, and if he’s coming in, he’s going to need a cup of wine!” That’s basically the origin of it.

There’s also a Hasidic tradition regarding Elijah that you love.

Yes, there’s an idea in Hasidism that each of us has inside ourselves an aspect of Elijah. It’s a spark of zeal, a spark of intensity. Wanting to help someone or tell someone good news—that feeling is Elijah working inside you.

That’s why I called the book “Becoming Elijah.” What we’ve been talking about this whole time is how he becomes who he becomes, how he’s reimagined by each generation. That’s the simple explanation of the title. But the hidden one is that each of us can become Elijah.

This article first appeared on The Jewish Experience, Brandeis University’s website devoted to Jewish issues. Subscribe to the monthly newsletter.