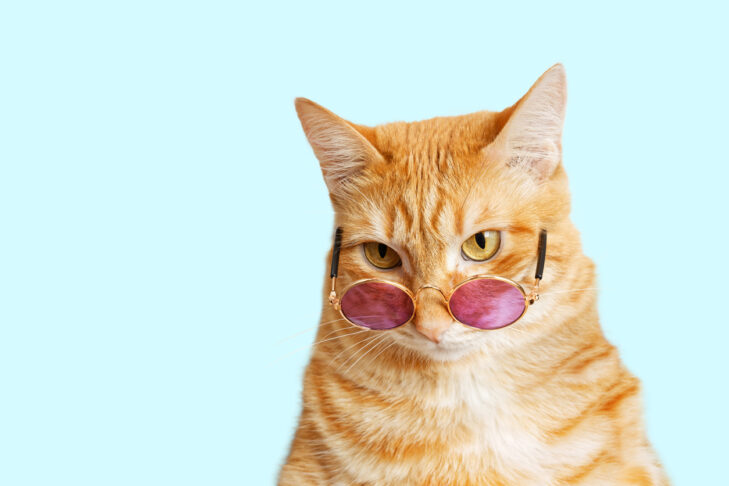 When I wrote the article “Why All Cats Are Jewish” in 2019, I had no idea it would quickly become my most popular article to date. Perhaps I should have expected this, as cats are a surefire hit on the internet, but I was nonetheless thrilled by the influx of cat pictures and pleasant emails I received in response to the article.

Over the past two years, I’ve spent a lot of time at home (to the combined enjoyment and chagrin of my own cat) and have noticed several more similarities that back up my hypothesis that all cats—or at least the ones in my life—are Jewish.

1. Cats draw their origins from the desert. Despite the fact that most of us are melting in the current heat wave, cats do a bit better in the heat than some. This is in part because the modern house cat can be traced back to a Middle Eastern wildcat, relatives of whom still roam what used to be known as the Fertile Crescent. The parallels here are fairly obvious, as the first Jews quite famously wandered the desert as well. Though many of us no longer reside in hot places (usually), both Jewish people and cats have those sandy origins etched into our history.

2. Cats are everywhere, both culturally and geographically. Like cats, there are few places in the world where one cannot find Jewish people. Even in inhospitable environments, Jews find a way to thrive and imbue their culture with traits from their homes. While cats don’t maintain this same form of culture, their presence permeates our culture as well. Ursula K. Le Guin kept cats and wrote: “Cats know exactly where they begin and end. When they walk slowly out the door that you are holding open for them, and pause, leaving their tail just an inch or two inside the door, they know it. They know you have to keep holding the door open. That is why their tail is there. It is a cat’s way of maintaining a relationship.” Other authors from all over the world have drawn inspiration from their own cats, including Ernest Hemingway, T.S. Eliot and Genki Kawamura. Their presence, like that of Jewish artists, can be felt in a plethora of environments.

3. Cats are particular, sometimes to a fault. Though I don’t consider myself a very fussy person, there are some that may disagree. Cats are historically finicky, though their choosiness comes from a certain sensitivity rather than maliciousness. Other picky Jews may agree—we’re not particular because of a desire to be contrary, but rather because we have to be. Just as a cat may become distressed by a change in environment, so may a Jewish person. This also feeds into my hypothesis that all cats are autistic, though my reasoning hasn’t moved far beyond “because I am also autistic and I sense an innate kinship.”

4. Cats are funny. Anyone who’s lived with a cat for any amount of time knows they have an incredible sense of comedic timing. My cat, Tali, has a rotating cast of nuanced facial expressions, and sometimes I feel that she derives as much entertainment from me as I do from her. Jewish people are similarly clever and intelligent, as evidenced by a long history of Jewish humor.

5. Cats are often misunderstood. This point was brought to my attention after the publication of the first article, and I’ve been kicking myself for not exploring it ever since. Misconceptions about cats run rampant—that they’re cold, not loving or indifferent to those around them. This could not be further from the truth, and this lack of understanding has real-world consequences for both individual cats and the species as a whole. This misinterpretation and reliance on stereotypes is unfortunately present in non-Jewish circles, and I don’t need to expound upon the ways that hurts Jewish people. However, I’ve found that even those who don’t care for cats can evaluate their own perspectives over time, and the same can be true for people.

6. Cats make the world a better place simply by existing. I really like cats, and I shudder to think what culture would be like without them. Particularly in the last year, my own cat has been an enormous boost for my mental health. She reminds me to eat, refuses to let me lie in bed all day and provides a quiet companionship that I’ve found invaluable. Similarly, Judaism has enriched my life in countless ways, and I know it will continue to do so.