Almost two years into this pandemic, especially as the weather gets colder and outdoor activities become drastically less appealing, it can be difficult to engage with local arts and theater. Arlekin’s Zero Gravity (zero-G) Virtual Theater Lab, led by director (and Arlekin founder) Igor Golyak, director of photography/editor Anton Nikolayev and an incredible cast and crew have created an innovative response to this challenge with their new documentary theater project, “Witness.” All a ticket holder has to do to participate in this immersive sensory and interactive experience is go to their computer, put on their headphones and be ready to engage emotionally with the production. I’ve seen “Witness” twice, and found it to be not only profoundly different from what I had anticipated, but also just profound.

The play is set (via digital space) on the St. Louis, the luxury liner that departed Hamburg in 1939 and was transporting over 900 Jews fleeing labor camps and the imminent Holocaust. However, Cuban authorities denied the ship permission to land, as did, shamefully, both the United States and Canada. Because of this, the ship was forced to turn back to the horror of the passengers. Two-hundred fifty-four of those passengers were killed in the Holocaust.

“Witness” first welcomes us, the audience, “onboard” the St. Louis before that fateful arrival in Cuba. As we log in from our computers, participants can interact via the chat mode. As the show begins and the ship “disembarks,” the layered soundscape kicks in—the sound of waves and seagulls and the creaking of the ship. The emcee (Gene Ravvin) introduces a talent show by the passengers. If the idea of the St. Louis having a talent show is surprising to you, it certainly was to me! But all the characters and dialogue and interactions—yes, including the talent show—are sourced directly from documents, letters, journal entries and ship logs. After the audience gets to know some of the passengers (as well as the performers portraying them), unexpected events begin to happen to the emcee. A sense of surrealism gradually sets in, until the show brilliantly breaks the fourth wall entirely. 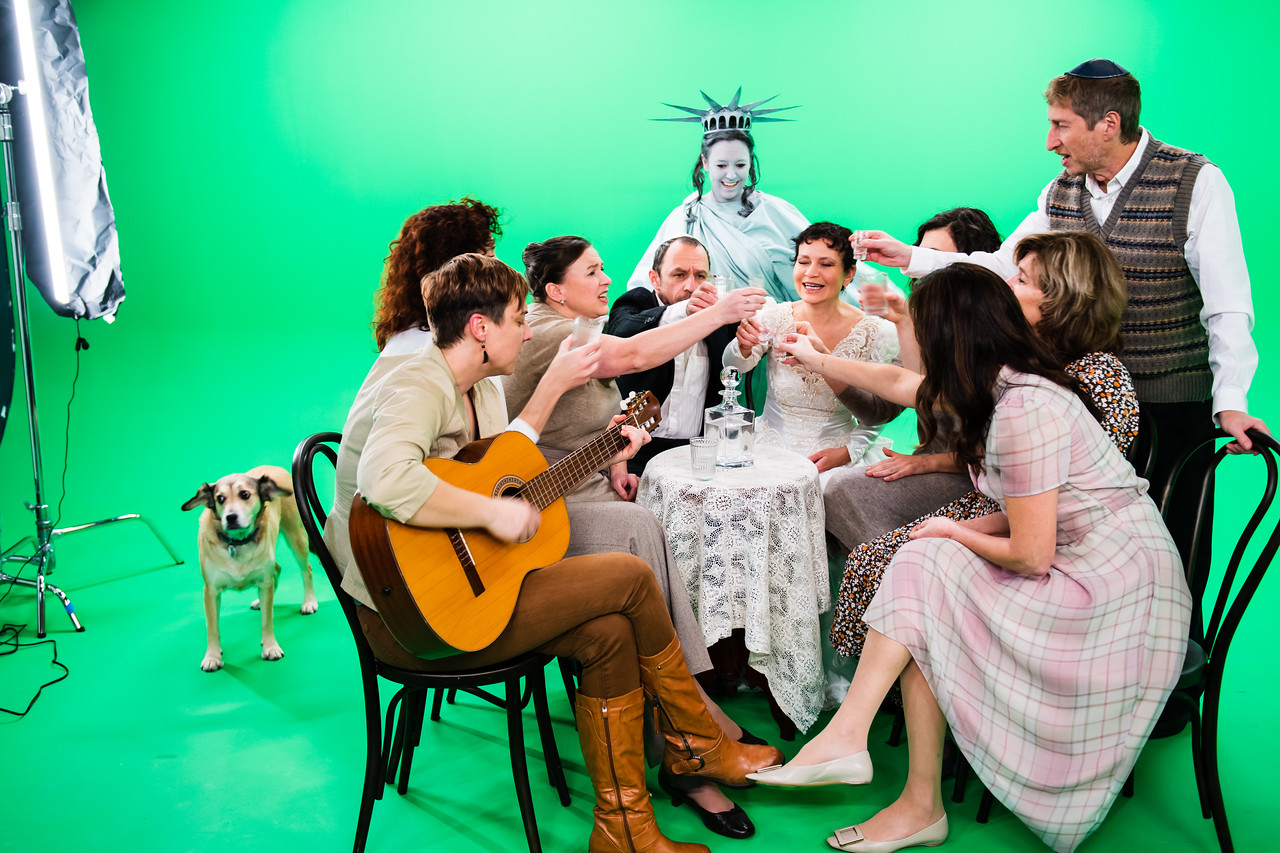 The intentional atmosphere of disorientation is heightened during the second act. The audience is encouraged to turn off the lights and sit with one ear near a door (to simulate the real experience of being trapped in their cabins) as the St. Louis passengers await news of their fate. Binaural sound provides a 3-D stereo sound sensation through the headphones of the audience. For me, this was the standout sequence of the show and it stuck with me long after I took out my earbuds and closed my computer.

The third act places the St. Louis in a continuity of antisemitism, as the emcee wanders the endless green screen hallways getting glimpses into different vignettes, encountering out-of-place figures discussing contemporary realities of antisemitism. One topic is the horrific stabbing of Rabbi Shlomo Noginski last summer. Arlekin Players is a company of Jewish immigrants, and the production demonstrates a keen awareness of both the specificity and universality of the dangers and challenges of Jewish immigrant journeys. As a viewer, I appreciated the authenticity brought to the production.

“Witness” isn’t “only” about St. Louis and the Jews onboard. It’s about the migratory experience of Jews throughout history, antisemitism, belonging and the fear that no matter how many times we are displaced, we will never be accepted. Being a witness to “Witness” can also serve as a powerful catalyst for how the audience thinks about their own experiences with immigration and anti-Jewish animus—the many comments and questions in the chat from the audience can attest to this (as could, for that matter, my therapist, with whom I’ve had many deep discussions about this show).

After a December performance, I moderated a post-show talk back with Golyak to learn more about the virtual production, the sociopolitical commentary, the standout technical aspects of the show and what’s next for Arlekin. Watch a recording of that conversation above, and then get your tickets at zerogravity.art. “Witness” runs through Jan. 23.