This is the second installment of a four-part look-back on the Boston-Haifa Connection’s inaugural Hatikvah Mission, written by Ken Kaplan.

Yom HaShoah
For all those who attended Boston’s commemoration of Yom HaShoah at Faneuil Hall, the profound emotion and power of the moment were evident. Danny Nishlis, the Haifa co-chair, said that for him it was unquestionably the highlight of the week.

“Soldiers in uniform, with an Israeli flag, standing on Yom HaShoah in Boston next to the memorial, and saluting the flag of Israel,” he said. “There is no stronger moment than this, to demonstrate for Diaspora Jewry: the Holocaust on one side, and the Revival on the other. None. None. And this we accomplished 100 percent, 120 percent.”

Eight of the 12 soldiers represented Israel that morning in the hall, facing the Israeli flag and the crowd. An estimated 600 people were in attendance, schoolchildren and grandparents, survivors and members of diverse faith groups, military veterans and activists wearing Save Darfur T-shirts. 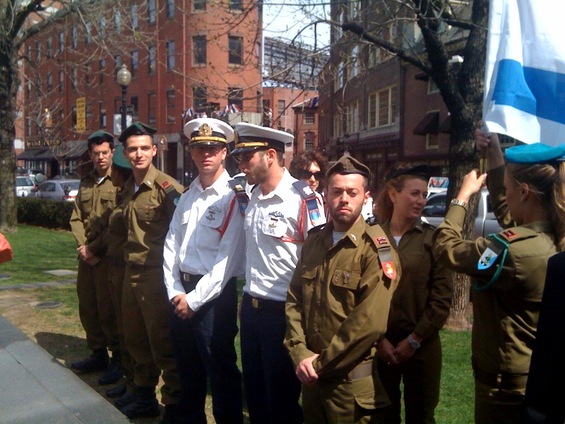 The event drew many from outside Boston as well. Linda Bernell, a resident of New York City, who was in town that weekend to visit her daughter, attended with her son-in-law. Looking down from her seat in the balcony, Bernell, the daughter of survivors, told how her parents, as children, spent the war in hiding, her mother fleeing from country to country, from Germany to Belgium, her father the whole war in  Belgium. Miraculously, she said, all her parents’ many siblings survived, though they dispersed to several countries after the war.

The ceremony began with six blasts of a shofar, one for each million, and a minute of silence. Over the next 90 minutes, the crowd heard an impassioned exhortation for “good people to stand up for the truth” in support of Israel lest “evildoers triumph,” and a survivor’s heartbreaking account of personal loss, even after the camps were liberated.

But for many, the moment, the scene that is emblazoned in memory, was during the singing of Hatikva: the eight young soldiers facing the crowd and saluting the Israeli flag, and in the crowd, three elderly US Jewish WWII veterans, at attention with their campaign ribbons on their chests and their veterans caps on their heads, saluting right back.

Mission Statements
Shortly after the ceremony, CJP President Barry Shrage and Yuli Edelstein, Israel’s minister of Public Affairs and the Diaspora and former refusenik, addressed the soldiers at CJP’s offices. Shrage, recalling the efforts of the US Jewish community on behalf of Soviet Jewry more than 20 years ago, said “when we became involved in the Soviet Jewry movement, we did it to help Soviet Jews and Yuli and Natan [Sharansky], but what we really did is help ourselves. Because nothing strengthens our sense of being Jewish more than actually engaging in a whole wide process to help Jews in another part of the world.

“And this is what actually shapes our understanding of you soldiers,” Shrage continued, “which is, however you understand what you are doing to defend your families and your country, Israel, we actually view what you do as very much defending us and our lives in the most fundamental kind of a way. American Jews live a charmed life. This is a country that knows virtually no anti-Semitism, and yet it is so clear to us that we have that freedom and we have pride as Jews because of what you represent and what you do.”

Edelstein, for his part, emphasized that it would be incumbent upon the officers to report back to their colleagues on the reality of what they had learned about Diaspora Jewry. The good and the bad. He spoke too of the value of linking the next generation of Israeli and Diaspora leaders so that when the day comes they are in positions of authority, they will have a lifetime of shared experiences to draw on in their collaborative efforts. 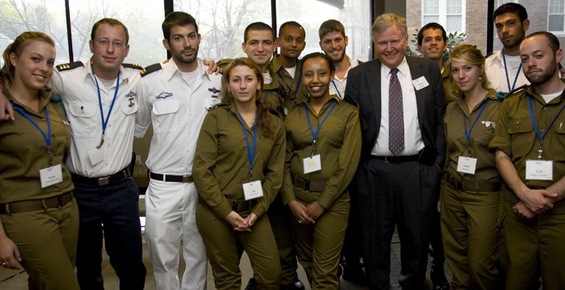 Shrage, describing the genesis of the Boston-Haifa connection, said that from 1948 until 1989 or ’90, “American Jewish concern for Israel was basically in a way a reaction to our own failure to do what we needed to do during the Holocaust. … From 1967, when we felt that on the one hand we almost lost Israel, and on the other hand we saw this unbelievable heroism, American Jewish life was focused on Israel and Israel alone. But it was all about philanthropy, sending a check … with no idea what it does.”

Over time the American view of Israelis as Ari Ben Canaan-like heroes, and the Israeli view of Americans as “fat tourists taking pictures,” were “bound to disintegrate under close observation,’’ Shrage said. “So we said, beginning in 1990, that this couldn’t be the way we needed to be, we needed to get to know each other, or it was going to be all over. As it is, our cultures move in radically different directions. American Jews are becoming increasingly spiritual, interested in religious life … and any Israeli Jew who comes to this country and experiences religious freedom in this country has a very different view of the potential of Judaism.

“We don’t hardly send money to black boxes anymore. We send money to projects that we understand, to people we know, to friends we’ve gotten to know over time, and the outcome is that even during the intifada, when no American Jews were going to Israel, we [in Boston] were sending over planeloads. Because just to visit somebody or go on a tour doesn’t mean much, but if you know your friends and neighbors are in danger, you’re much more willing to go.”

Shrage concluded by inviting the officers to define for themselves the degree of their involvement in programs bridging the gap between the communities.

“For me,” Shrage said, “the big project is defining what it means to be a Jew in the 21st Century. Israeli Jew or an American Jew.” American Jewry, he said, is “right at the edge of huge, major changes” that affect relations with Israel. On the one hand is the Birthright program, which brings thousands of young Jews to Israel every year. On another is the fact that 50 percent of American Jews are now living in interfaith households, though it is not, he said emphatically, destroying their identity as Jews.

“I need you to think about that with us,” Shrage urged the officers, “struggle with us to define what should be the essential spiritual, intellectual, historical nature” of Jewishness. “It’s critical for us, it’s critical for you.”