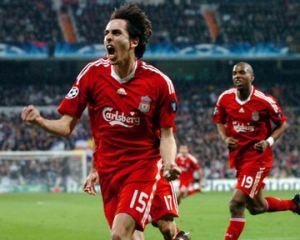 If you could pick any place on Earth to find a future elite soccer player, Dimona is probably the last place you’d look.

Most of us know about Dimona for one of three reasons:  1) the alleged nuclear facility located outside of town, 2) the community of Black Hebrews who live there, or 3) we stopped there once on the bus from Be’er Sheva to Eilat.

Dimona isn’t sexy.  And it isn’t a football hotbed.  But one local boy defied the odds and made it to soccer’s highest level- Yossi Benayoun.

Yossi Benayoun, aka “The Diamond from Dimona”, has enjoyed a successful career in professional soccer since the mid-1990s.  Starting in the Ajax youth program in Amsterdam, returning to Israel to play in Be’er Sheva as a teenager, and later rising to star for Maccabi Haifa, Beanyoun worked his way up in Israeli football and began to attract the attention of European clubs.

When I lived in Haifa in 2000-1, Benayoun was one of the best players in Israel, starring for Maccabi Haifa.  From 1998-2002, he scored fifty-five goals in 130 appearances and it became clear that his career lay in Europe, not Israel.  Moving to Spanish club Racing Santander in 2002, Benayoun continued to impress, and after three years made the jump to West Ham in the English Premier League.   More success led to his transfer in 2007 to English giant Liverpool.

It was (and is still) a little thrilling in an Ahad Ha’Am, cultural-spiritual Zionist kind of way, to see the undersized Benayoun competing against the stars of world football.  I was lucky to watch his dramatic winning header against Real Madrid in the historic Bernabeu stadium in the UEFA Champions League in 2009, as experience which roughly translates into a hitting a game-winning home run in the ALCS to win the pennant (Aaron Boone circa 2003, anyone?)

Despite his scoring some high-profile goals and regularly sending beautiful passes to Fernando Torres and Steven Gerrard, Benayoun struggled to get playing time from coach Rafael Benitez.  Benayoun’s relatively small size, coupled with Liverpool’s star-studded midfield and offense and Benitez’s questionable managerial style, made it hard for him to crack the starting lineup, but when he did play, it was like watching a Tasmanian devil weaving around the pitch and feeding lovely crosses to his attacking teammates.  His hat trick in the fall of 2009 against Burnley (and a fourth goal was waved off) was a pleasure to behold (I DVR’d that one).

Discontented with his lack of playing time, Benayoun left Liverpool for Chelsea in the summer of 2010.  After a promising start to the year, though, he ruptured his Achilles tendon and spent months in rehab getting back his fitness.

Despite a summer and a preseason in which he was showing good form, it became evident, yet again, that Benayoun’s status as a not-quite-elite player was going to land him on the bench most of the time.  With Chelsea’s glut of midfielders, as the transfer period wound down, he was attracting interest across Europe, including from AS Roma, Lille, Liverpool, and Tottenham Hotspur.  Luckily for Benayoun, the recent injuries and suspensions plaguing Arsenal, in addition to the recent sale of Samir Nasri to Manchester City, has left an opening for Yossi to leave Chelsea on a year-long loan and play meaningful minutes on a team with a lot to prove in both England and in the Champions League.

Now, at 31, Benayoun has another new home.  A career that began with HaPoel Be’er Sheva in the mid-1990s has now brought him to Arsenal for perhaps a last run at greatness in Europe.

While his career will no doubt end with a return to Israel and a few more years of being the captain of Israel’s national team (currently in the midst of a challenging Euro 2012 qualification campaign which features a pivotal game against Greece on Friday), it’s still a delight to see Benayoun on Fox Soccer on Saturdays and Sundays playing in England.