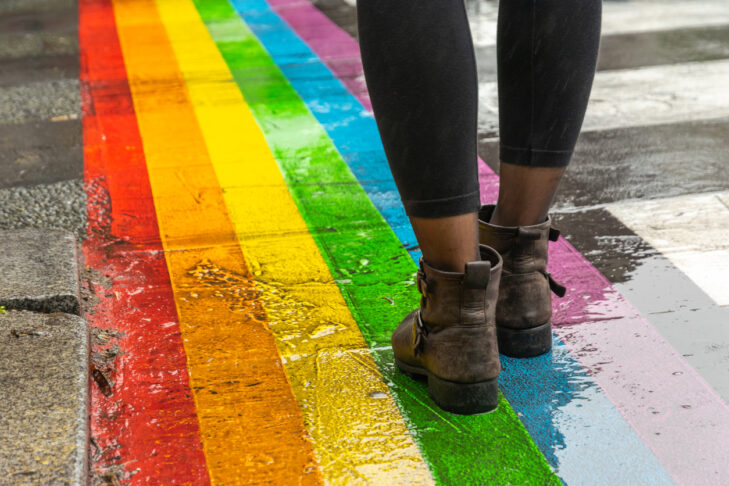 This morning, as I was walking to work, a gentleman stopped me to ask for money. As I rifled through some bills, he said, “I knew you would help me because of how you’re dressed.” It’s a potentially unusual statement from a stranger, but I instantly knew what he meant. He saw me, in my double denim (jeans and a jacket covered in pins) with my short hair, and deduced, correctly, that I am gay. In turn, I realized that he was also gay. We spoke for 10 seconds at maximum, but the nonverbal cues we sent to each other through our clothes and the cadence of our voices colored the entire interaction.

To a straight person, my outfit may seem innocuous. It wasn’t as if I was wearing a rainbow pin, or two crossed Venus symbols, or a T-shirt that said “I’M A LESBIAN” in large letters. But to those in the community, these small indicators speak volumes. I’ve found that when I meet other gay people, particularly gay women, I never have to outright state that I am a lesbian, or that my fiancée, Olivia, is a woman. They usually clock me based on my clothes, or a particular interest of mine, and I do the same for them. But with many straight people, I often have to outright state it, and even then it doesn’t always register.

The first person I ever came out to was me, but even before that, people noticed. “Are you sure you’re not a lesbian?” my best friend (now fiancée) asked in college, and when I finally came to terms with my sexuality, they were already on board. But other people in my life were blindsided, and there are still members of my extended family who remain blissfully unaware. On Olivia’s family’s holiday card last year, she and I held up a Hanukkah wreath her mother had made, and an aunt responded, in shock: “Olivia is Jewish? And gay?” A double coming out, as it were.

Just as I have to carefully select who learns that I am Jewish, I weigh my options when telling certain people that I am a lesbian. Where I’m from, there’s a risk of violence if I’m caught holding my partner’s hand, but in Boston, things are a bit more relaxed. I remember seeing lesbians out together when I first moved to the city and feeling shocked, in the same way I felt shocked seeing Jewish foods and candles in the regular grocery store. I felt a bit more freedom to be myself, but there’s still the occasional thrill of terror, even if it’s unfounded.

Most LGBTQ people come out hundreds, thousands, tens of thousands of times. We come out to ourselves, our families, our friends, strangers. Every time is a balancing act, weighing the potential blowback to the rewards of living as ourselves. This could be remedied if we as a society stopped assuming that everyone was straight and cisgender until proven otherwise. I think we’re moving in the right direction, but there’s still a ways to go. However, now that I am more comfortable with who I am, I actually enjoy coming out to people. Because then, sometimes, they get to come out to me, and we part ways seeing the other as they truly are.