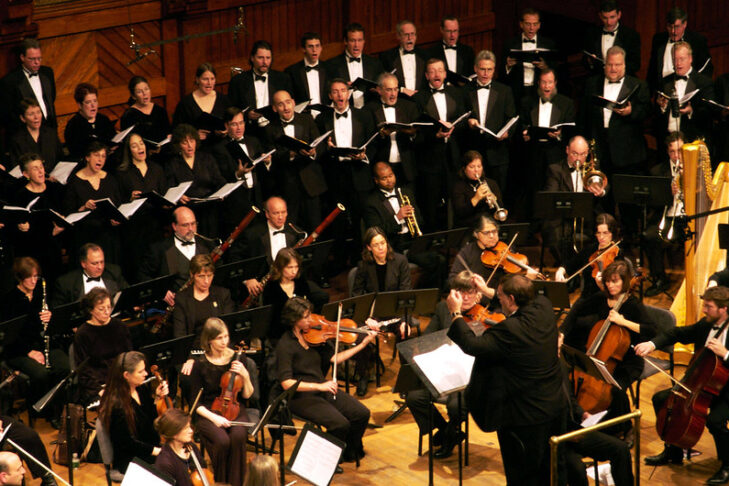 On Sunday, March 8, Coro Allegro, Boston’s LGBTQ+ and allied classical chorus, will return to Harvard University’s Sanders Theatre to perform the late composer Robert Stern’s moving and momentous “Shofar.” (Jewish Arts Collaborative is a partner.) In tandem with librettist Catherine Madsen’s retelling of the episode of the Golden Calf and Moses’ subsequent shattering of the first set of tablets containing the Ten Commandments, Stern’s work musically interprets the four calls of the shofar articulating the ineffable.

Along with Stern, two other artists who were integral to Coro Allegro’s 27-year history will also be remembered next weekend. Baritone Sanford Sylvan was a frequent soloist with Coro Allegro, as well as the first recipient of the chorus’s Daniel Pinkham Award recognizing outstanding contributions to classical choral music and the LGBTQ+ community. Baritone Donald Wilkinson will also be lauded for his contributions to Coro Allegro over his lifetime.

In a recent interview with JewishBoston, Yoshi Campbell, Coro Allegro’s executive director, noted that the organization was “born out of the gay chorus movement in 1991, as well as an impulse to build bridges between disparate communities while performing music at a high artistic level. Coro has contributed to the gay choral movement by performing pieces that look at serious topics such as Black Lives Matter. The group also has a long tradition performing works by diverse composers, which includes a long and significant list of Jewish artists.”

Coro Allegro’s artistic director, David Hodgkins, a former student and protégée of Stern, added that the group’s founding member David Cutler originally sang with the Boston Gay Men’s Chorus. However, Cutler missed the sound of men and women singing classical music together. What began as a gay and lesbian chorus in the early 1990s evolved to become Coro Allegro, which includes all members of the LGBTQ+ community and its allies.

“Shofar” begins with various horns coming together, presenting a dramatic shofar call. “You don’t hear the actual shofar,” Campbell pointed out. “It’s a metaphor for the human experience of being whole, broken, shattered and then whole again. It’s told against the backdrop of the story of Moses and the Golden Calf.”

Hodgkins further noted that at one point, Stern’s piece alludes to the Holocaust and “how it was this big shattering of the covenant between God and the people. Pieces of music start forming again to create a whole. By the end, you have this beautiful chorale that sums up the entire piece. The duet that was interrupted in the beginning [of the piece] is heard again. The composition is four distinct pieces with an arc.”

Madsen said she constructed the libretto from passages in the Torah, various midrashim, lines from contemporary Jewish poets, including Yiddish poet Jacob Glatstein, and a pastiche of Emily Dickinson’s verses.

In her synopsis of the piece, Madsen wrote: “The shofar is the ram’s horn of Jewish liturgy, used during the High Holy Day period to evoke the breakdown of the soul’s defenses and call the Jews back to God. …the libretto for ‘Shofar’ is divided into four sections, representing the four types of shofar blast used in the liturgy.”

Further on in the synopsis, Madsen detailed the following about the blasts:

Tekiah—a long unbroken blast signifying wholeness—establishes the order of creation and presents the giving of the Torah on Sinai as one aspect of that order. This is a movement from solitary existence to relationship, from “I am that I am” to “I am the Lord your God.”

Shevarim—“broken,” a triple blast—begins with the people’s confusion when Moses fails to return from the mountain. Though they have embraced the relationship with God, they cannot maintain it; they are only 90 days out of slavery and unused to self-governance, and they want reassurance and familiar gods. They make the golden calf and abandon themselves to ecstatic worship.

Teruah—“smashed,” a nine-fold stammering blast—introduces the shattering of chronology, of coherent narrative, of the integrity of both parties. God’s wounded love becomes hostile and vindictive; if the people have failed him, he will fail them, setting their enemies upon them without mercy and without end.

Tekiah gedolah—a very long blast signaling the return to wholeness—returns to the Exodus narrative of the renegotiated covenant and the making of the second set of tablets. God and Moses speak tenderly to each other, and God’s proclamation of his attributes of mercy is echoed by Moses (though he is permitted to see only God’s back as he passes). This tenderness between two volatile personalities seems as close as the relationship can come to consummation; a sort of mutual Kol Nidre in which all vows are canceled and reestablished on the basis of inner rather than outer compulsion.

Hodgkins observed that the overall theme of “Shofar” is unity. “When things are broken and then shattered, and life is not agreeing within itself, there is a pulling together in the final piece of the chorale that all things turn toward the center. ‘We build together, and there is no other labor.’ That message of hope, endurance and of respecting one another is timeless and one that always needs to be heard.”

Campbell also regarded “Shofar” as a great American piece of music. “There is something about American culture—the ability to draw on the ancient traditions we all come from and make them resonate with the rest of world history. The story about Moses and the Golden Calf is also about the Holocaust and the Jewish Diaspora. ‘Shofar’ resonates as an American story because it’s about how we move forward from conflict. We bring all of our communities and desires together, and that kind of struggle is very moving in the piece.”

Find information and tickets for “Shofar: In Memoriam” here.