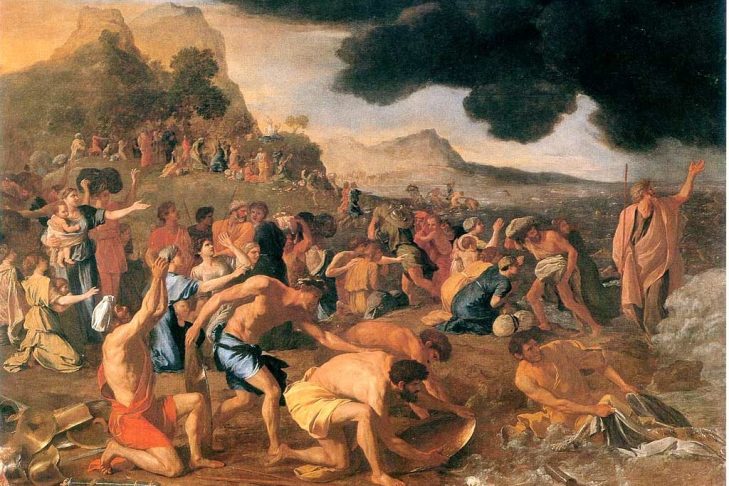 “Crossing of the Red Sea” by Nicholas Poussin

This week we are treated to a thrilling journey from bondage to freedom, complete with a quick escape—oppressors at our heels, a trek on dry land between spectacularly split seas, a song of liberation on exaltant lips and, finally, jubilation on the shores of deliverance.

The high drama, suspense and intense joy of Parashat Beshalach is undoubtedly amongst the great mythic moments of the Torah. Less appreciated is the fact that it’s followed by an epic comedown replete with grumbling, general dissatisfaction and complaints. The turnaround time from miraculous salvation to deep discontent is both staggering and not completely surprising. Those whose lives were transformed in their trek from enslavement to freedom grew thirsty and, no matter how supreme your spiritual high might have just been, when you need water, you need water.

We are used to recalling the Exodus; the glory of our redemption from Mitzrayim is called to mind liturgically on a daily basis. Yet, this week it feels more apt to focus, instead, on the role of our complaining. The midrash imagines this grumbling beginning even in the midst of the sea. One journeyer turns to another and says, “We had mud there and we have mud here.” For me, this feels like a top-notch complaint, completely ignoring the miraculousness of the moment and fixating on the petty discomfort. The Torah text itself provides ample examples of groaning and kvetching in the days after the people’s miraculous deliverance from slavery.

The Song of the Sea has barely ceased when the children of Israel recognize that they have a serious water shortage on their hands. In a place named for the bitterness of the water, the people realize their predicament and they complain. The bitter waters of Marah are only the beginning. In Chapter 16, it is the people’s grumbling about a lack of food that precipitates the giving of manna. And then, only a chapter later, another situation unfolds in which fear spreads that there will not be enough to drink. In each case Moses is confounded by the kvetching, while the Holy One seems to listen and respond in kind. A careful reader of parables could only come to one conclusion in reading these stories: complaining catches the attention of the Divine.

A New York Times story a few weeks back was headlined “Go Ahead and Complain. It Might Be Good for You.” (Not that any of us were waiting for permission from The Times!) In the article, the journalist, Micaela Marini Higgs, reports on new evidence that complaining may be a useful tool in coping with life’s adversities. She writes, “The most obvious reason we complain? Life isn’t perfect. That’s why expressing negative feelings is not only normal, but also healthy.” The personal benefits of venting are complemented by a societal function; the article explains, “We’re not very good at expressing our feelings as a society, so it’s pretty common to complain in order to express a feeling,” said Tina Gilbertson, a psychotherapist and the author of “Constructive Wallowing.” And since, as she said, “Any time we are sharing emotional content with someone, that is a vehicle for bonding,” we’re especially fond of using complaining as a social tool.” Perhaps, according to this thinking, our journey to peoplehood was successful because from the start, we knew about the cohesive power of the collective complaint.

We live in a moment in time rife with groaning and grumbling; how often we seek out the ear of someone willing to share in our sorrow. It can feel connecting to express our disillusionment and disappointment to those around us and, in turn, to hear that others are feeling the same way. Of course, we recognize that complaint alone will not be enough, that times such as these require political action. But sometimes we just need the time and space to name the emotions that we’re feeling. Perhaps the Torah that we encounter this week is meant to teach us that such complaining has the potential to be productive, to bring about solutions, whether those come from above or from below.

While complaining can feel second nature, I have also recognized that there are times when articulating the particulars of my anxiety can feel challenging. Even if the Torah and The New York Times are trying to tell me that it’s OK to kvetch, what happens when I can’t find the words? Here, the teaching of Rebbe Nachman arrives to offer some solace and support. The great master and mystic of Breslav teaches that even a sigh has the potential to connect us to the spirit of life: “The sigh or the groan of a person brings wholeness to where there was lack.” When we are dispirited, our breath has the potential to connect us back to the breath of life, to renew within us all that was created through breath.

We are living through an era of grumbling, an age of the mournful sigh. We would be wise to seek meaning in these coping mechanisms. May we be blessed to find connection in our complaint, to understand our sigh as an extension of the original Divine breath, and to return renewed afterward to our work of recreating a more whole world.

Rabbi Jordan Braunig, Rab’14, was ordained at the Rabbinical School of Hebrew College in Newton and is the director of community-building at Tufts University Hillel.