“His Majesty’s government view with favour the establishment in Palestine of a national home for the Jewish people, and will use their best endeavours to facilitate the achievement of this object, it being clearly understood that nothing shall be done which may prejudice the civil and religious rights of existing non-Jewish communities in Palestine, or the rights and political status enjoyed by Jews in any other country.” (The Balfour Declaration, 1917)

“…the Principal Allied Powers have also agreed that the Mandatory should be responsible for putting into effect the declaration originally made on November 2nd, 1917, by the Government of His Britannic Majesty, and adopted by the said Powers, in favor of the establishment in Palestine of a national home for the Jewish people” (League of Nations Mandate on Palestine, July 1922)

News flash: Israel is the Jewish state.  From the first days of the 20th century the land has been earmarked for the Jewish people.  So why all the fuss now over Israel’s Jewish-ness?  It is settled law.

We live in a hysterical world.  The endless news cycle and our bloodthirsty scramble for news and argument creates pseudo-events and faux outrage over absolutely nothing.  In my Prozdor class last night, I looked at one of my students, code named Bonus Becca, and told her that it was impossible to get news from any one outlet anymore if you wanted a neutral perspective, since everyone is editorializing and raving in bold letters and condemnatory language.  The only way I can read and make up my mind now is by reading countless Twitter links and realclearpolitics articles to get a full range of perspectives.

The twitverse, blogosphere, and mainstream media have been up in arms for the past week and a half over the proposed loyalty oath in Israel.  A bill in Knesset is proposing that all of its wannabe citizens, Jewish and not, must affirm their allegiance to Israel as a Jewish state.

Which leads me to the loyalty oath.  Oh the outrage! Oh the horror!  Groups have compared the proposed law to the Nuremberg laws against Jews and to Fascism and the rhetoric is spinning out of control.

But wait. Stop the presses.  How about these oaths that exist in other repressive regimes like… the Unites States, the UK, and Canada?

I swear (or affirm) that I will be faithful and bear true allegiance to Her Majesty Queen Elizabeth II, Queen of Canada, Her Heirs and Successors, and that I will faithfully observe the laws of Canada and fulfill my duties as a Canadian citizen.   (Canadian Oath of Citizenship)

I (name) do solemnly, sincerely and truly declare and affirm that on becoming a British citizen, I will be faithful and bear true allegiance to Her Majesty Queen Elizabeth the Second, her Heirs and Successors, according to law.  I will give my loyalty to the United Kingdom and respect its rights and freedoms. I will uphold its democratic values. I will observe its laws faithfully and fulfill my duties and obligations as a British citizen. (Citizenship Ceremony of the United Kingdom)

Fealty to the monarch?  Potential conscription into national service or the armed forces?  Referring to God?  Where are the church-state separatists?  Where is the Tea Party talking about over-reaching government?  Where are those crying out that there is a double standard to born citizens of these countries, who do not make such pledges or oaths?

The proposed bill in Israel does not require any personal sacrifice, simply an affirmation that Israel is the Jewish state.  On this, there can be no debate.  Israel was created as a homeland for the Jewish people and that is its eternal legacy.  Is Israel as a Jewish state now, for the first time, up for debate in the court of public opinion?  If so, shame on us.

Claims of racism, Fascism, dehumanization of the religious minorities in Israel?  Please.  Nowhere else in the Middle East is there freedom of religion, let alone religious authority of other religions over their holy sites in the host nation, like exists for the Christian sites in Israel or the Waqf’s jurisdiction over the Temple Mount.  Israel’s Declaration of Independence goes out of its way to safeguard the integrity of religious sites of other faiths- in stark contrast to the destruction of Joseph’s tomb in October 2000 in Shechem and the removal of Jewish archaeological evidence from the Temple Mount by the Wakf over the decades.

If this was truly a discussion about freedom, repression, and religion, then we would be asking questions like why it is illegal to be a Jew in Jordan.  Or why a non-Muslim may not even enter the city of Mecca.  Or why people who convert out of Islam are punished by execution in Saudi Arabia.  Or why women have no rights under Islamic law.

This is not such a discussion.  But maybe it should be.

Is Israeli democracy perfect?  Certainly not.  Is there tension between Israel as a Jewish state and the ideals of a democratic state?  Yes.  Does the loyalty oath really have teeth or enforceability?  I don’t know.  Is it a good idea?  Probably not. But is it as notorious as it is being made out to be?  No way.

Until Israel starts executing converts out of Judaism, not permitting women to travel or drive in public, or making being a Christian illegal, I’m not willing to join in the hysteria about the loyalty oath. 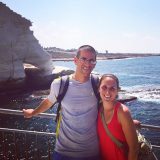 Reading and Q&A: “Getting Good at Getting Older” With Rabbi Geller

“Soon By You” Blazes Another Trail in the Modern Orthodox World

The Decision Not to Have Children

Alicia Silverstone LIVE at Chai in the Hub