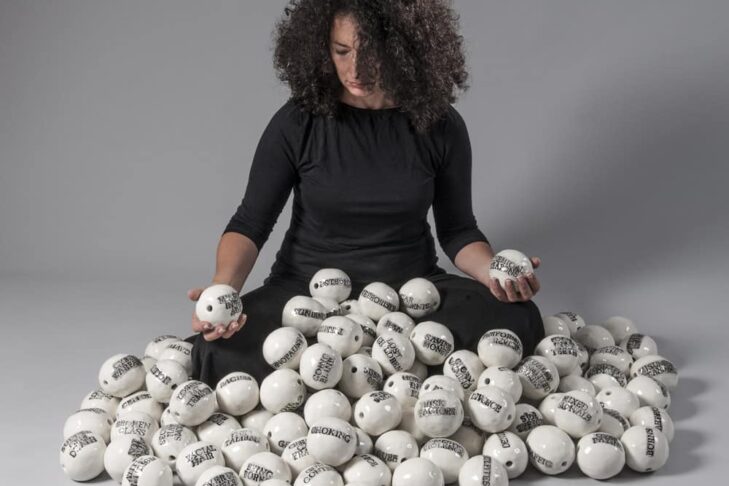 The 2020 Jerusalem Biennale has gone online in a series of conversations with artists showing abbreviated exhibitions of their work. Sponsored by the Lambert Center for Arts + Ideas—part of the Marlene Myerson JCC in New York City—artists participating in the Biennale from all over the world took to Zoom to discuss and show a selection of their work.

Below I highlight conversations with four artists based on their geographical diversity, as well as the diversity of their artwork.

Jacqueline Nicholls, a London-based fine artist, has been a long-time favorite of mine. Nicholls is a renaissance woman who innovatively uses different media and craft techniques in her art. Her genres have included drawings, print, embroidery, paper-cutting and sewing, all in the name of expressing Jewish and feminist concepts.

Nicholls’s background in architecture and medical illustration has informed her art. She has also taught Jewish adult education. “My art has been a bringing together of the art studio and the beit midrash [the traditional Jewish place of study and learning],” she said. “In the artwork, I will often quote the texts that have inspired, challenged and motivated me to form a response.”

In her conversation with Jerusalem Biennale’s founder and director Ram Ozeri, Nicholls began by grieving the year 2020 and the art projects in Venice and Krakow in which she would have participated. In lockdown, she has contemplated the theme of absence. In the first week of social isolation, nature inspired Nicholls and she drew sticks she found on her walks.

As time progressed, she also played with the formal structure of a Talmud page and explored her interest in handwriting. The two came together as she contemplated a fragment of the Mishna Torah in Rambam’s handwriting. “There is an excitement about that fragment—the sense of aura in that the fragment isn’t complete and doesn’t tell a full story,” she said. “But it draws us in with its full presence. There is the trace of ink left by the flicks of a nib that was held in the hand that belonged to the Rambam.”

Andi Arnovitz is an Israeli American who lives and works in the Baka neighborhood in Jerusalem. Arnovitz is a conceptual artist who uses a variety of media, including etching, printmaking and fabric, to explore the tensions among religion, gender and politics. Among her creations are her worry beads. Three-and-a-half inches in diameter and made of stained and glazed clay, they fit in the palm of a hand. However, the issues they evoke go beyond what the mind can create. Arnovitz’s worry beads bring up troublesome, traumatic and political issues as varied as white sugar, date rape and Iran. During the pandemic, newly created worry beads have brought to light issues surrounding the COVID-19 virus.

Just before the pandemic, Arnovitz began working on a series she called “Epidemiology.” “I was looking at the sources of disease on a cellular level,” she said. “This led me to investigate how disease happens in the body. Disease on a cellular level can be quite beautiful. What does pancreatic cancer look like, or a salivary gland tumor? The COVID-19 virus is also unique.”

Yonatan Ullman was born in Boston to Israeli parents. He has spent most of his life in Israel and is now based in Tel Aviv. He, too, works in various media, including paper, sculpture and painting. Much of Ullman’s art is an exploration of his identity. In his artist statement, he noted: “Like everyone else, I have my issues with my identity. As for self-reflection, well, having been raised by a psychologist mother and eventually marrying a psychologist—questions about self-reflection are obviously a charged issue for me. In a nutshell, I believe self-reflection is one of our fundamental innate human traits, and one of our greatest tools for continued growth.”

Ullman frequently inserts photographs of himself in his art and works with them as self-portraits. He finds himself putting together “a proposal for a monument to myself as I wished to be remembered,” which evokes Michelangelo’s “David” and Rodin’s “The Thinker.” In his representation on paper, the sculpture eventually shatters, and the head is separated from the body.

The image of decapitation returns in the depiction of a bull. Ullman observed that there are many images of the ox depicted throughout history, from ancient cave paintings to Picasso’s images. The ox for him also calls to mind the story of the Golden Calf. “When Moses encounters this image for the first time, it’s the opposite of a monotheistic understanding of God,” he said.

Ullman contemplates the breakdown of language with a series depicting the Hebrew alphabet. Originally, Ullman envisioned arranging the letters randomly, but finally decided to display them in order. What remained throughout was his determination to separate the aleph, the first letter of the alphabet, from the rest of the letters. Ullman said that disconnect points to a time when Miri Regev, Israel’s minister of culture, introduced the “Loyalty in Culture Law.” The law would have allowed the government to take away funding from any project deemed not loyal to the state. Artists protested by burning their work. For Ullman, the missing Aleph of his installation was a political statement. “The diagonal lines of the aleph point upward and downward,” Ullman said, “as in heaven and hell.”

Argentine artist Mirta Kupferminc is known for a collaborative work, “Borges and the Kabbalah.” The 29 etchings and aquatints by Kupferminc are paired with explanatory text by scholar Saul Sosnowski. Kupferminc is also the daughter of Holocaust survivors, and that salient fact also informs her work. “I am the daughter of immigrants and survivors,” she said. “Limits and frontiers are important topics to me, not just spatially. The language spoken inside my house and outside in my country was different. To be  Jewish in Argentina is to identify strongly with multiple identities. Outside of Argentina, I am Latin American. Inside Argentina, I am a Jew.”

Kupferminc said she sensed “a new richness” attached to her work in the pandemic, as well as refined powers of observation. “Connectivity is different,” she said. “We see how people live on Zoom. Their physical backgrounds say a lot. Time is different in that virtual relationships become real.”

At the moment, Kupferminc can’t go to her studio in another part of Buenos Aires where she has a printing press. Instead, she improvised a workshop in her son’s old bedroom. She also recycled work in a way that has “a new interpretation during this pandemic. I’ve rediscovered my art in this pandemic.” One notable piece is the reworking of an aquatint print of a tree trunk, to which Kupferminc is presented in a dusky blue hue. On top of the tree trunk stands a lone figure. The brown roots descend into the ground, and the trunk is wrapped in a white cloth reminiscent of the gartel, or sash that is wrapped around the Torah. For Kupferminc, the image represents “migrations—people out of their own land and a feeling of isolation. We’re becoming familiar with a new and unexpected situation.”

Videos of all artist talks are available here.