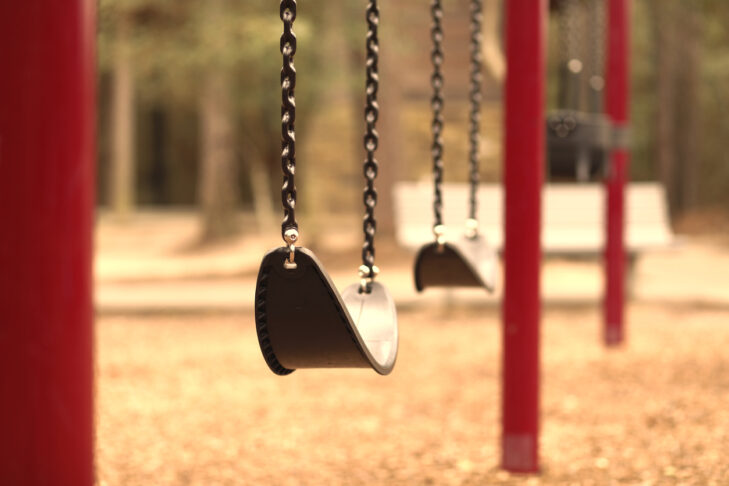 Today was my preschooler’s “last” day of Preschool 2. Normally, he’d be enrolled through the summer, but, you know, COVID-19. His wonderful school is taking a break from Zoom calls and gatherings and will hopefully reconvene somehow (we’re not sure how) later this summer or in September.

Today, they hosted a drive-by parade in front of the playground, which is now strangely empty. When I gathered him up to head out for “school,” he said, “Wait! What about the iPad?” It was so sad. I explained to him that he was actually going to see his teachers in person, not on a screen. He looked confused.

I loaded him into his car seat, and we cruised slowly up the hill that we’d driven so many times before, toward the building, joining a line of balloon-festooned cars honking and beeping. We rolled down the windows so that his masked teachers could wave, while my older son carefully took some iPhone shots out the window.

My eyes welled up behind my sunglasses as I smiled and chatted, and not because I’m staring down day 3,980,598 of quarantine-with-kids. I miss our school community so much. We’ve been with this school for almost 10 years now (the pleasures of having kids spaced six years apart!); both of my boys attended since they were small. My preschooler waved tentatively, looking somewhat sheepish, like he’d been caught doing something wrong, tightly gripping his Ninja Turtles figurines in his hand. This wasn’t quite real school. We don’t know when we’ll see our teachers without masks again or when we’ll be able to go inside, or even out on the playground, because who can trust toddlers to stay six feet apart?

Those teachers give my son so much more than I can. Right now, he spends a good part of his day in the playroom with his big brother, acting out scenes from “The Floor Is Lava” (addictive) and playing Super Smash Bros. I always took his school for granted; sure, I appreciated that they occupied him while I worked, but I never truly absorbed the enormous amount of energy and patience required to keep a kid entertained for hours, and hours, and hours…until I tried to do it myself. Seeing the line of teachers along the sidewalk, holding signs and smiling and playing maracas, I was filled with a sense of gratitude that this community exists for him. I mean, he’s my child and I love him, but after a few rounds of Connect Four, I’m checked out. I’m scrolling my phone. I’m ready to put on the TV. Children, it seems, can be tiring.

I have no idea what’s going to happen come fall. I don’t even know if I’ll feel safe sending him back to school at all until there’s a vaccine, but at the same time, I can’t imagine him without the structure, fun and love that he gets in his little classroom. He misses his friends. He misses his teachers. He misses the normal interactions we used to take for granted, but I think I miss them even more. I never appreciated them fully, not until now. Slowly, his sense of preschool normalcy might fade; he’s already used to hopping on his iPad for play dates and gatherings. But I remember how life used to be, and I can’t wait for it to return. I’ll never take it for granted again.