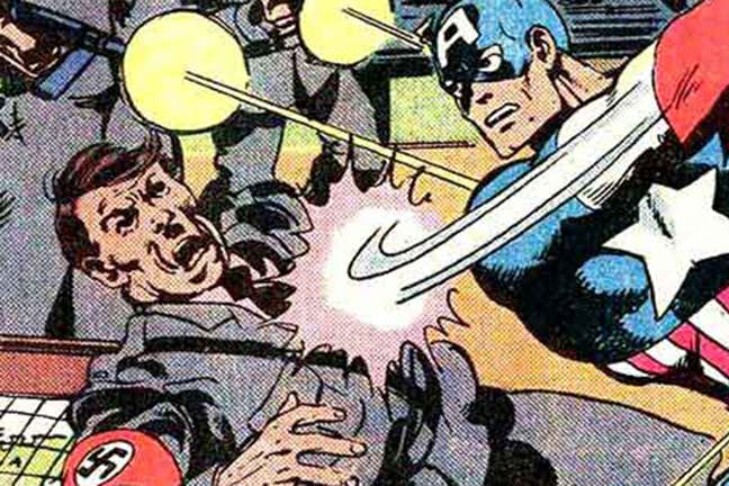 Many kids think their grandparents are superheroes. Not everyone grows up with the creator of Captain America, however. Megan Margulies, a New York City native now living in Newton with her family, is the granddaughter of Joe Simon, a legendary Jewish cartoonist.

Margulies came of age in a gritty section of the Upper West Side, marked by addicts, crime and fires. She lived in a tiny one-bedroom apartment and often fled to Simon’s Midtown studio for Hungry Man dinners and chats with the man she called “Daddy Joe.” (Heroism runs in the family: She’s married to Larry Margulies, founder of Pavement Coffeehouse, which makes many people feel like Captain America on a regular basis.)

Margulies talked to JewishBoston about her new memoir, “My Captain America: A Granddaughter’s Memoir of a Legendary Comic Book Artist,” out on Aug. 4, with a virtual reading at Brookline Booksmith on Aug. 7. 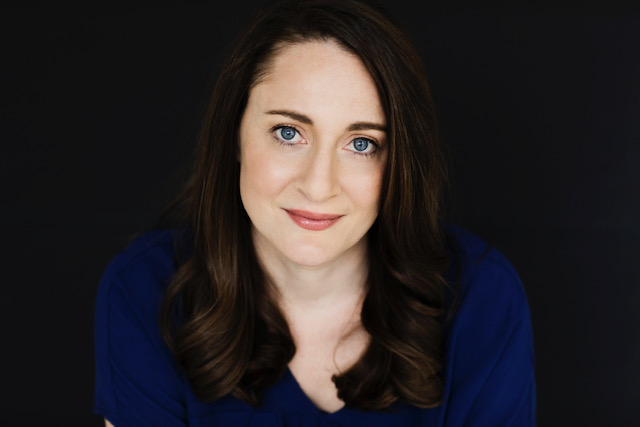 So, who was Joe Simon? Tell us about your grandfather.

I’m glad that you’re my first interview, let me say, because I need to practice not crying when I talk about him. He was a cartoonist from the Golden Age of comics, and he co-created Captain America, which is obviously his most famous character, and he lived 40 blocks south of where I lived in New York City growing up.

The book is obviously a tribute to him and his career and my way of shouting his name from the rooftops, because I’m proud that he is my grandfather and I often felt like he was shadowed in the comic book world and didn’t get the recognition that I thought he deserved. It’s also a tribute to him as a grandfather and the love I had for him and what he meant to me growing up in New York, and how I still carry him with me, even after he has passed. I’m very fortunate because I have this character, Captain America, who is everywhere, to keep my grandfather alive and present in my life.

How would you describe your relationship?

We were very close. I was at his apartment at least once a week. He was very funny. He had a dry sense of humor. Everybody who met him loved him. He just loved to make people laugh. [He was] self-deprecating, which I’ve definitely inherited, and obviously creative. He was drawing until the day he died. He was sharp as a tack and with it to his very last day.

How did he come to have such a unique job?

He did some illustrating for the local newspapers where he grew up in Rochester, New York. Then he finally made the move, I think he was around 23, to New York City, which was his big dream in life. He took freelancing assignments, and one of those assignments led him to a comic book packager. His first comic book assignment was a Western, and from there, he just used his contacts and he was referred to the next person and the next person, and finally he ended up being the first editor-in-chief of Timely Comics, which would later become Marvel.

How did he create Captain America?

He met his artistic partner, Jack Kirby, in 1939. In 1940, they came up with the idea of Captain America. And this was before the U.S. had entered World War II. But there was a lot of turmoil in the States at this time about whether they should enter, and a lot of people didn’t think they should. They were both Jewish and their parents both immigrants, and they were just really disgusted and horrified by the news coming from Europe. And as artists, this was their way of having a say. The first cover that came out for the first issue in 1941 had Captain America punching Hitler in the jaw.

And then the U.S. entered World War II. They were very brave actually to do this and to put that on the cover, because there were a lot of Nazi sympathizers in New York, which seems hard to believe. … Well, maybe not so much now. They would get threats at their offices for that cover, and they had to have police protection outside of the building.

How did Judaism affect his career?

He was supremely proud of being Jewish. He wasn’t very religious. His parents were very strict and religious, and I think that sort of scared him off from it a little bit. But obviously with his creation of Captain America and fighting Nazis and giving his voice to that showed how important his lineage is and his family who came from Europe and England. And whenever I brought home a guy, he always asked, “Is he Jewish?” He was very concerned about that. I think Captain America is definitely his most Jewish-related character, but a lot of the creators back then in the Golden Age were children of immigrants and Jewish.

How did you actually gather material for the book? What was the process like?

A lot of the book is obviously from memories. I have a ton of home videos of him talking about the business, as well as fond memories of him. He did write a memoir that was published the year he died, and he had me on as a contributing editor, mostly because he knew I wanted a profession in writing. I got to read all of the pages before they were submitted, and it acted as my textbook while writing this book. It was just amazing to have to make sure I’m setting the dates right, and who was who.

So, this is your first interview! What’s your elevator pitch for the book?

The main thread of the book is a love letter to my grandfather. It also deals with my childhood in New York City and grappling with trying to find space within this huge city and in my family’s very small apartment, and how he saved me from all of these frustrations I had at the time. Later it goes on to show that I finally got out of the city and moved to the suburbs, and I had this life I dreamed of, but I felt lost without him there. It shows how he saved me growing up, but he’s also still saving me and he’s always going to be this thread in my life, that will always be very important. 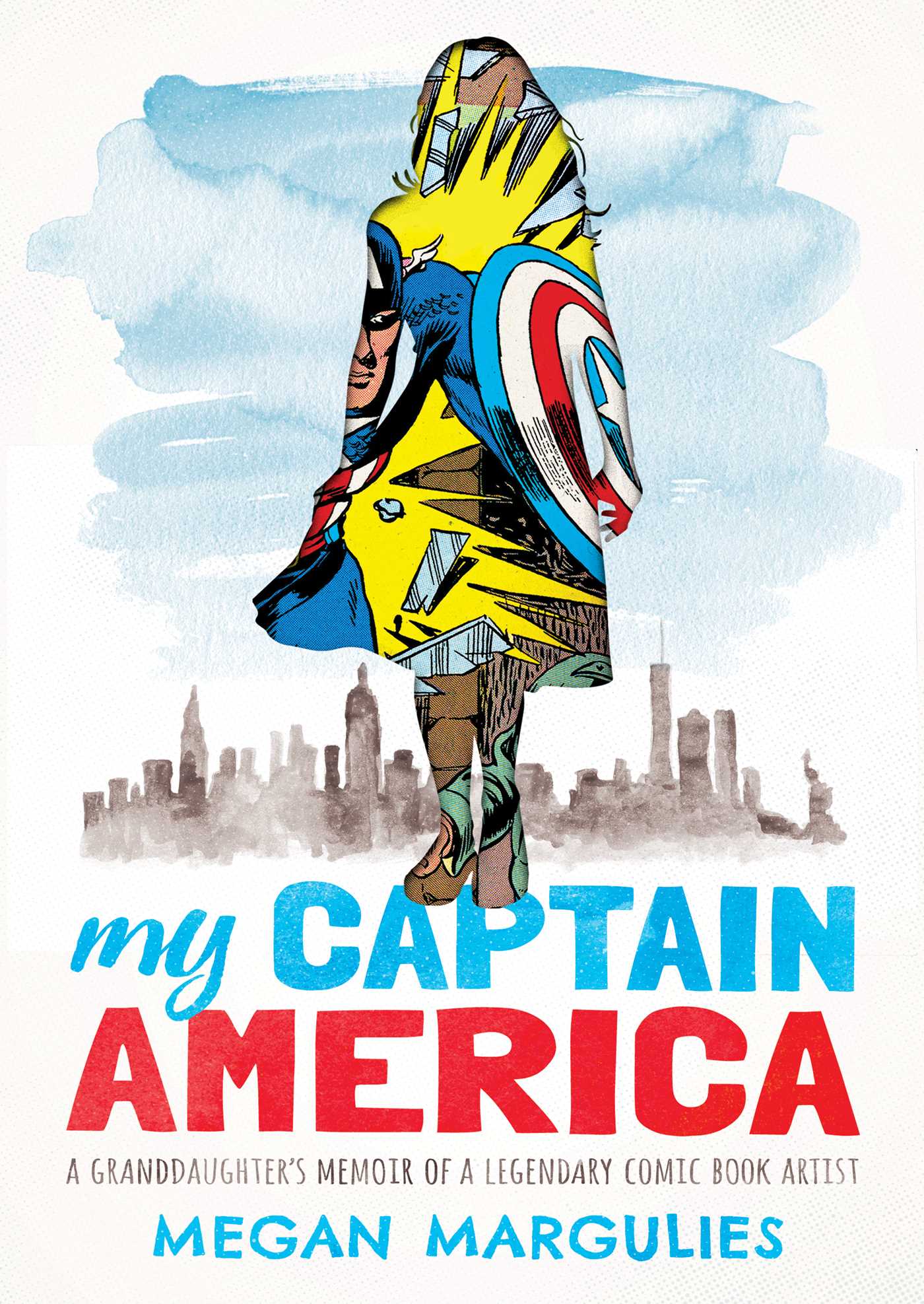 What do you think is special about the relationship between grandchildren and grandparents? Especially now, it’s very poignant for people who are separated from their loved ones, especially older people.

Well, it’s funny. I talk about this in the book, where I always struggled with this guilt of, “Do I love him too much as a grandfather? Am I too sad about his death because he’s my grandfather and not my father?” I knew other friends who had a pleasant relationship with their grandparents, but it wasn’t so tightly bound. I often questioned the legitimacy of this love.

Grandparents offer this support system but also an escape. And they can offer the fun side that parents can’t as much. And he was very silly like that. We would make videos together with his recorder, his video camera. And I will watch them now, and there is just so much joy. And we could laugh like we were friends. I think that’s something special that grandparents really can offer.

What was it like growing up in New York? It seems like you didn’t love it, or you wanted to get out.

I wanted to get out.

I think a lot of people would love to live in New York!

I know! When I was pitching the book to agents, I was like, this is not a love letter to New York. It might have turned some people off, but New York is idealized as a place you go when you want to achieve your dreams and magical things happen there. I think it was very different, especially in the ’80s and early ’90s, to grow up there. Of course, at the root of it, I love New York. It will always be my home and it made me who I am, but there was a lot of fear and chaos in the ’80s and ’90s. And that was another reason my grandfather was so important to me then because he offered this safe haven and calm amid the storm of New York.

There was a lot of crime, and I saw my share of muggings. I got held up in high school when I was working a job at a bread shop. And I grew up in a very small apartment. By the time I was 17, there were five of us in this 550-square-foot apartment. My family was very loving, and they provided everything we needed, but in terms of finding space when you’re a teenager, which is very important, I didn’t really have that, which was also why I ran to my grandfather.

Who is the audience for the book?

I think comic book fans will especially enjoy the book because it does offer a behind-the-scenes of the business and how he got to be where he was. And it gives a glimpse into this creator, not just the professional side of him, but a personal look at him. It also will appeal, I hope, to lovers of memoir and coming-of-age stories, because there is this theme of love and loss and finding your place in the world, and really figuring out where your home is and where you’re meant to be.

Where is your home?

Well, my home now is the suburbs, but I struggled with allowing it to be my home because I didn’t feel like I belonged here. I’ve been in the city for so long, and the suburbs are sort of like the mecca. And then I finally got there, and I was like, I don’t know, do I belong here, do I deserve this house? And look at the sunlight coming in the windows! This is amazing! I don’t belong here. And that again ties into keeping Daddy Joe present in my life on these new, unknown suburban streets.

Over time, I learned to find comfort in these Captain America sightings. When he first passed, they were a bit painful, but now, I’m just so lucky. I realize how lucky I am to have that.

How are you continuing your grandfather’s legacy?

It’s very important that my children know who he was, especially my older daughter. We always make sure there’s artwork on the wall from him, and we get her the occasional Captain America coloring book or toy. And when she was first learning to talk, I taught her how to say Daddy Joe. She said Dada Joe. But yeah, it’s funny because if she sees Captain America or the shield on somebody’s T-shirt, she screams, “Look, it’s Daddy Joe!” And she doesn’t realize Daddy Joe is not Captain America. She doesn’t understand they’re two different people!