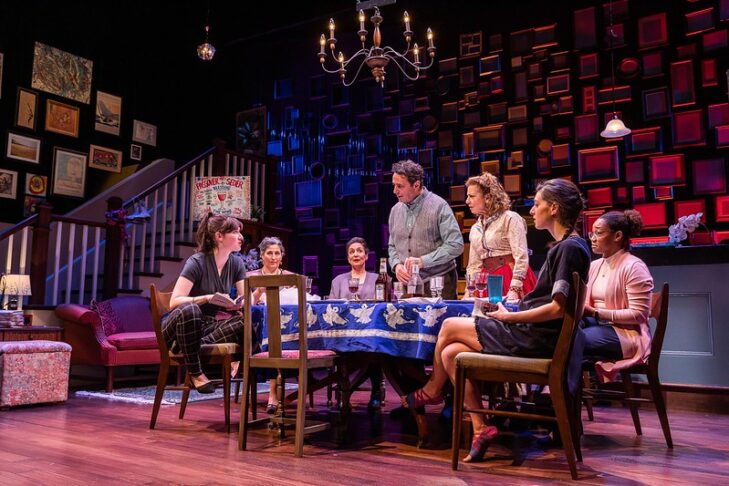 The cast of the Huntington Theatre Company’s production of “We All Fall Down” (Photo: Nile Hawver)

“We All Fall Down” by Somerville-based playwright and Huntington Playwriting Fellow Lila Rose Kaplan takes place in the 2010s in Linda and Saul Stein’s Westchester home. Linda is a psychologist who has recently published a book with the ironic title “Parenting Difficult Children.” Saul, a college professor, has unexpectedly retired early. The couple has two grown daughters—one of whom lives at home and is studying to be a yoga teacher and the other who teaches history and lives with her boyfriend on the West Coast.

The Steins, who are not observant but consider themselves to be culturally Jewish, are hosting a seder for the first time. Things go from absurd to riotous over the course of the evening, with a dash of poignancy added to the mix.

Kaplan has been writing plays since high school and is a protégée of playwrights Sarah Ruhl and Paula Vogel. Kaplan’s previous plays—including “Home of the Brave” and “The Magician’s Daughter”—have been described as dark comedies, and “We All Fall Down” falls under that rubric. The 39-year-old playwright recently spoke to JewishBoston about her Huntington Theatre Company world premiere and her Jewish identity.

When did you begin writing for the stage?

Things find us as much as we find them. I’ve always loved storytelling, playing music and dancing, as well as reading and writing. In high school, I had the opportunity to write a play, and two halves of myself came together. As a playwright, I could be Emily Dickinson composing my lines in the attic, and then I could bring them downstairs to a stage for other people. In college at Brown University, I studied with Sarah Ruhl and Paula Vogel. After working with Paula for a year on my thesis play, I felt as if she knighted me as a playwright. Sarah, who is a mom and a playwright, has been a role model for me. I see how connected she is to her family and her values. It’s inspiring to me as the mother of a 5-year-old daughter.

What inspired you to write “We All Fall Down?” 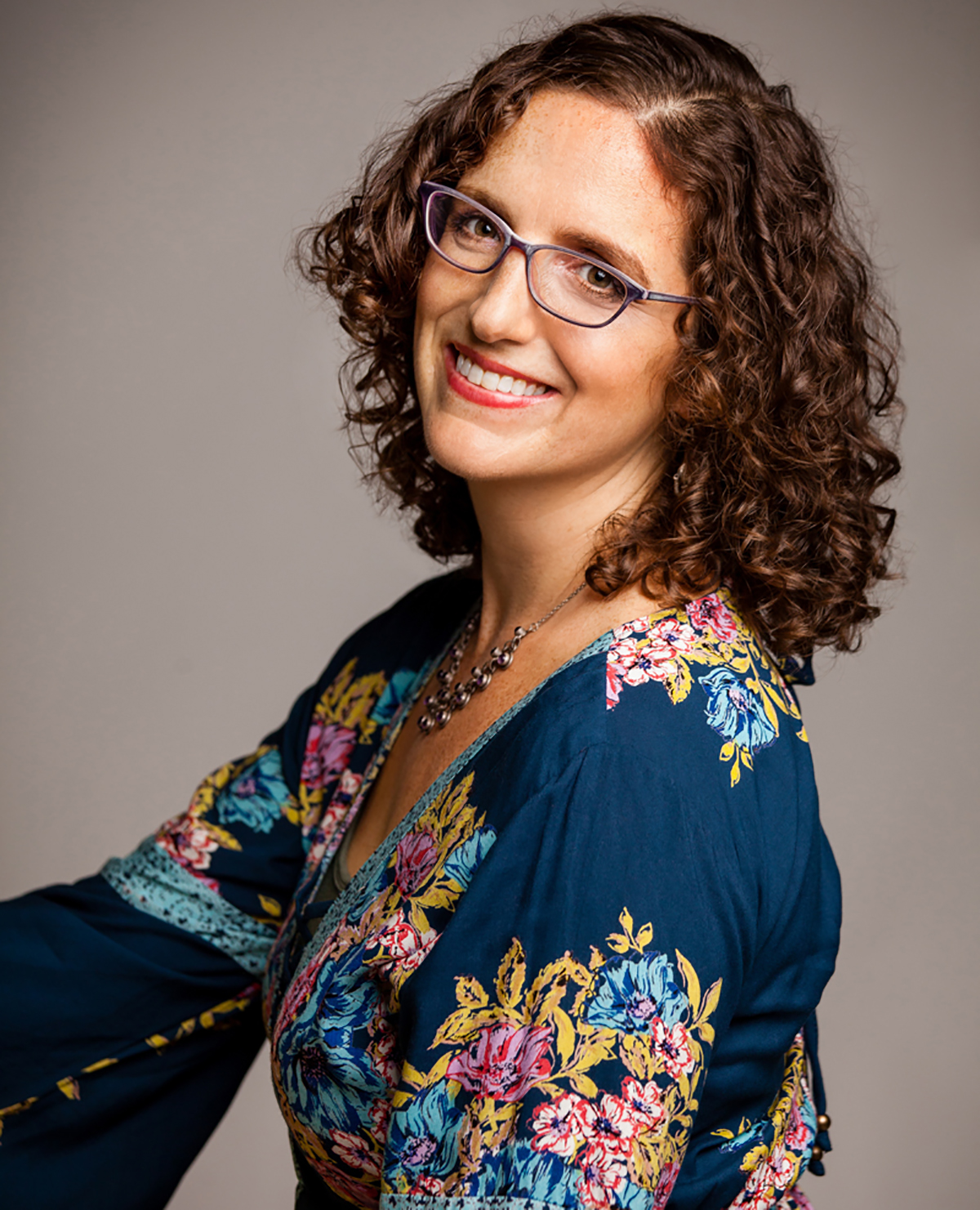 The initial inspiration was a seder I went to at my parents’ house. The play is not exactly about my family, but they inspired it. I grew up in Westchester, New York, in a culturally Jewish home. We didn’t attend a temple, and I didn’t have a bat mitzvah. Judaism was something we did at other people’s houses. When I was a young adult, my mom finally hosted a seder, and as it happened, a couple of people canceled who were more observant than we were. My dad grew up religiously and rejected it, but no one wanted to run it. We had questions like, “Why are we doing this seder?” and “Why are we here?” Something about it was moving at the end of the evening. It stayed with me. There is also something about ritual and coming together to tell a story that has meaning and power regardless of where you’re starting from.

I started this play 10 years ago, and it’s really grown up with me. There have been other plays in the interim. What started as a play about the daughters is now about the whole family. I began the play when Obama was president, and now, under Trump, I’m much more aware of being Jewish.

The Stein family is unaffiliated and assimilated. Were there any particular challenges in writing about them?

It’s how I grew up. What’s been interesting to see in the rehearsal room is this cast of fantastic actors—all of whom are Jewish from different generations and backgrounds—and observing their experiences of Judaism. I also grew up in a very leftist household. My parents were children of the ‘60s, which was as much a religion as anything else. Both of my parents are doctors, and we had a nanny who was a devout Christian. Her faith was so strong that she wanted us to know about our Judaism. I ironically received my Jewish education from her. I grew up very admiring of faith because of her. Raising my daughter, I think about the importance of faith, and the need to believe something can work for the world to move forward. I’ve done a lot of thinking about the power of belief and coming together, and it’s reflected in the play. Each character has their reasons for wanting to do the seder, and at the end of the play, it’s a successful seder.

How do you celebrate Passover?

I alternate between two different kinds of celebrations. At my aunt’s house, we use a Haggadah they wrote. Their daughters illustrated it when they were very young, so it’s very elemental and welcoming, particularly to someone who has never been to a seder. My favorite kind of Judaism includes people who don’t know exactly what’s going on. I’ve always felt a little on the outside as a non-observant Jew, so I appreciate a welcoming seder. My husband’s aunt hosts a joyful seder with a lot of singing, and it’s somewhat theatrical.

What sort of dramatic opportunities does staging a seder present?

The seder is a play families put on every year. Everyone has a part. There are certain places to sing, as well as so many opportunities to symbolically enact the Passover story. It’s a wonderful way for a family to be together. Then there are all the preparations that need to happen, as well as the family’s relationship to the seder and each other. It’s a fun and funny night.

Have you written other plays with Jewish themes?

“We All Fall Down” is my first play that explicitly addresses Jewish themes, and it’s been a wonderful experience. It makes me want to write more plays with Jewish themes. I didn’t realize how Jewish I was until I went to the rehearsal room and saw how people were relating to the text. I think I captured something about what it means to be a contemporary Jew. It was eye-opening and transformational to realize this is who I am.

Find more information and tickets for “We All Fall Down” here.