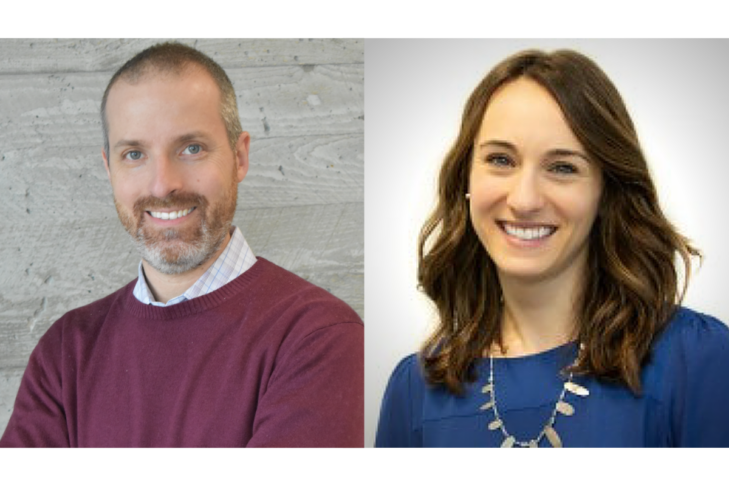 The award, created in 2016 in memory of Adam Madorsky, son of Karen and Jerry Madorsky, recognizes alumni who have continued to pursue social justice in their personal or professional lives. Jason and Naomi both exemplify the spirit and intent of the award, which will be presented to them on June 9, 2020, at EHS’s virtual annual meeting.

Naomi, CHA ‘97, serves as deputy director of programs at the Public Health Institute of Metropolitan Chicago (PHIMC) and focuses on workforce development, behavioral health, substance use, re-entry, HIV/AIDS prevention and care, and quality management. In addition to her role at PHIMC, Naomi is course director at Northwestern University’s Program in Public Health, within the global health concentration.

Naomi serves on the board of directors of Anshe Sholom B’Nai Israel, a warm, progressive Modern Orthodox synagogue in Chicago. In addition, she is actively involved in the synagogue’s fundraising as a co-chair of the annual summer soiree, Soul Cycle fundraiser and a member of the Chesed committee, which has been extremely active in supporting members of its community during the COVID-19 pandemic by establishing a buddy system, arranging grocery, meal delivery and regular check-ins and support for members of the synagogue community.

She deeply appreciates her Hillel roots for having instilled the importance of a Jewish education. With two young boys of her own, she is deeply committed to educating her children about the richness of our Jewish history and identities and instilling in them the beauty of our community. As her first exposure to formal Jewish education, she credits Hillel with putting her on the path for her life, and now her children’s lives.

Jason, CHA ‘91, earned his Ph.D. in experimental psychology from Tufts University and works at Northeastern University. He is the president of the board of directors of My Brother’s Table in Lynn. His involvement with the organization developed from a personal concern about growing income inequality and the desire to make an impact locally. Jason’s goal is to foster the relationship between My Brother’s Table and the larger North Shore community.

In doing so, he emphasizes shared responsibility for each other and recognition of the human dignity inherent to every person. Jason credits his call to social action back to formative years, both at Hillel and at home. He recalls learning how deeply ingrained empathy and social justice are in our Jewish values. He further credits, and remembers fondly, his parents modeling active involvement with causes they were passionate about at Hillel, their synagogue and other community needs.

“Having a theoretical foundation for thinking about social justice and an example of getting involved in important causes helped to lay the foundation for my future social action work,” said Jason.

Epstein Hillel School is proud of both of these alumni, their commitment to social justice and their work on the front lines, especially during this global pandemic.