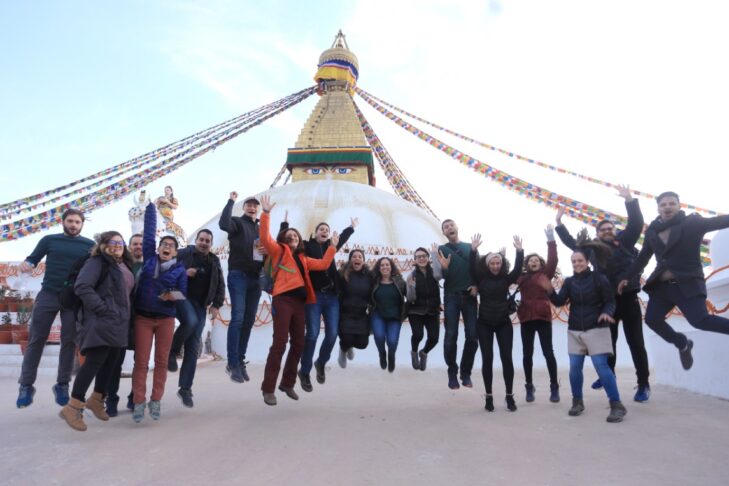 International flights are near the top of the list of bizarre social scenarios. Where else in the world do we feel comfortable taking our shoes off in a room full of strangers, complaining about free food and actively wishing ill will upon small children (for disrespecting the lights-off implied quiet hours)? Faced with the prospect of the 25-hour journey from Boston to Kathmandu, the Project Inspire crew had no choice but to buckle down and embrace the purgatory of an East Coast to East Asia journey.

I started the journey with a movie—as I am about two years behind on new releases—and supplemented the plot with as much free wine as I could get my hands on. After the movie, the wine and the engines droning put me into a stupor that became a light sleep. This lasted until an unruly child yelled a little too loud and my neck simultaneously gave up on supporting the weight of my head, rendering going back to sleep not an option. The windows were shut so I shuffled through some music and, as I had no interest in another film, turned my thoughts to the destination.

At the peak of the in-flight monotony, I couldn’t help but wonder why Nepal? What does Nepal mean to me? Nepal is not a country that flies under the radar. That is physically impossible. Most Americans learn about Mount Everest early in elementary school as it is the home of the literal peak of earth’s geography. I was no exception. I thought about my early experiences learning about Everest’s first summit in the 1950s by Edmund Hilary (who became Sir Edmund for his efforts) and Tenzing Norgay (also known as Sherpa Tenzing). The spirit and determination of the duo stuck with me. Growing up, my parents took my sister and me hiking in the White Mountains and Acadia National Park, where I‌ believed I channeled their mountaineering prowess every time I reached a peak or traversed a technical feature on a climb.

In 2012 I purchased Season 1 of the BBC‌ show “Planet Earth.” David Attenborough’s iconic assent and the impeccable high definition footage got me hooked to the point where I watched each episode more times than I can count. Even though I have not watched in years, I still vividly recall the finale of Episode 2:‌ Mountains. High up in the Himalayas, winds swirl and a flock of cranes attempts to cross the world’s largest mountain range as part of their yearly migration. With five hours to go before Istanbul, then an extended layover, and then another seven hours to Kathmandu, it felt like I was a crane trying to cross the Himalayas with a lot of work left to do.

It was in this contemplation of Planet Earth’s greatness when I came to the realization of why Nepal. Two years ago, I moved into a fifth-floor apartment with no elevator to speak of. In the beginning, I was so winded when I got to the top that I could barely put my keys into the lock. If the Himalayas are the roof of the world, Nepal is the top floor and its people must adapt to their geography as I adapted to my staircases. I came to Nepal to discover these stories of grit, ingenuity and opportunity that can only come in such challenging circumstances.

We’re Not in Kansas Anymore

Just like the cranes, Project Inspire (Hi Mom, I made it!) inevitably arrived in Kathmandu. No lost baggage, no lost people…a perfect start. Leaving the airport, the culture shock began to set in. As the bus rumbled through Kathmandu’s bumpy roads, the lack of traffic lights, commercial activity spilling from storefronts into the streets, advertising in an unfamiliar alphabet, a constant presence of low-hanging and perilous tangles of electrical wires mixed with my jet-lagged brain took me into a state of sensory overload.

The bus driver managed to navigate us through the chaos, using what seemed to be a combination of experience, instinct and what I can only describe as a magical power to pass inches from passing motorcycles without even flinching as I stared out the window, taking in as much as I could.

After a 30-minute ride, we arrived at our hotel, Le Himalaya, with a 30-hour journey from door to door complete. At this point, there were two things on my mind: a much-needed shower and a Nepalese meal. After a hotel lunch of rice, lentils, vegetable stir-fry and fish stew (all delicious) and a shower that was rudely interrupted by a clogged drain (fixed in 30 seconds, upon request), we headed out in search of our first destination: the Boudhanath Stupa.

Dating back to the seventh century AD, this UNESCO World Heritage Site was the calming presence I needed. We circled the Stupa counterclockwise, as one must, learning about its artistry, architecture and religious meaning while the sun set slowly, illuminating the 150-foot-tall structure in a mystical glow. It was beautiful.

On our way to dinner, we took a detour into a quiet back room of an art gallery where Project Inspire met Tibetan sound meditation. Our hosts expertly struck hand-crafted bowls with a mallet, creating a calming vibration that eased our minds, bodies and spirits. The group took turns experimenting with its healing technique as we all sensed the mystique of this ancient tradition.

Ending a fantastic evening was a delicious dinner of barbecued kebab at ROKPA, a unique and awesome social enterprise that provides vocational training for at-risk Nepalese children and prepares them for careers in the hospitality industry. Several beneficiaries shared their stories and showcased traditional Nepalese dancing.

From there, it was back on the bus, back through the streets (this time in the dark) and back to the hotel where I find myself now finishing off this post before drifting off into a much-needed sleep in a real bed after back-to-back nights upright. It feels great to be on the ground and even better to have started exploring a country full of surprises. We have a big day tomorrow and a big week coming up, so I will end with this: on behalf of an exhausted and excited Project Inspire, Happy New Year from Nepal! 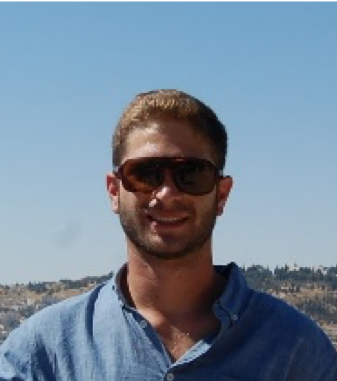 After completing his bachelor’s in entrepreneurship and innovation studies at the University of Richmond, Axi Berman embarked on three months of international backpacking. His trip began with a seven-week extended stay in Israel, including a Birthright tour and post-Birthright programs in Jerusalem, Tsvat and Tel Aviv. On this trip Axi began to learn digital photography with a hand-me-down Nikon camera, thus initiating an interest in photography and videography that he still pursues avidly to this day.

Originally from Boston, Axi returned home to attend graduate school at Endicott College and received a master’s degree focused on applied business and technology in August 2019. As a graduate student, Axi sought out unique work experiences, which included producing an entrepreneurship podcast recorded in a road-tripping recording studio, the rollout of 10 mystery picnics around New England and the production of video content for the same Birthright tour provider he had traveled to Israel with 18 months earlier. Axi currently resides in Boston’s Back Bay and works as a producer, project manager and experience designer.