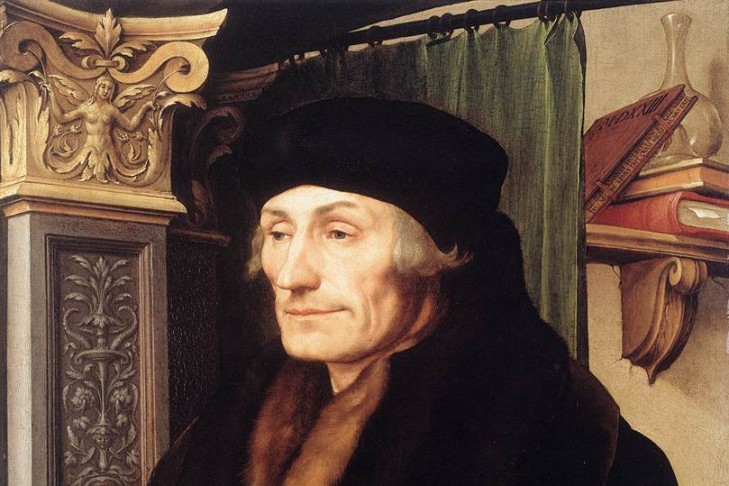 Portrait of Erasmus of Rotterdam by Hans Holbein the Younger (1523)

Erasmus was the leading figure of the Northern Renaissance. At a time when Leonardo, Michelangelo, and Raphael were revolutionizing Western art and culture, Erasmus was preparing a new design for living for a continent rebelling against the hierarchical constraints of the Roman Church. Today, however, he is largely forgotten, due mainly to one man: Martin Luther. As a young friar in remote Wittenberg, Luther was initially a great admirer of Erasmus and his diagnosis of what ailed the Catholic Church, but while Erasmus sought to reform that institution from within, Luther favored a more radical transformation. Eventually, the differences between them flared into an intense rivalry, with each trying to win over Europe to his vision.

Their conflict, Massing argues, represents the clash of not just two headstrong individuals but also of two distinct worldviews—Erasmus the humanist, embracing the brotherhood of man and the diversity of cultures within it, and Luther the evangelical, stressing God’s power and Christ’s divinity and insisting that all recognize those beliefs as absolute and binding. He maintains that their conflict forms a fault line in Western thinking—the moment when two influential schools of thought, Christian humanism and evangelical Christianity, took shape. A seasoned journalist, Massing here travels back to the early 16th century to recover a story that helps to explain our current condition. He concludes that Europe has adopted a form of Erasmian humanism while America has been shaped by Luther-inspired individualism.

Michael Massing is a former executive editor of Columbia Journalism Review and a frequent contributor to The New York Review of Books. He is the author of The Fix, a critical study of the U.S. war on drugs, and Now They Tell Us: The American Press and Iraq. He is a co-founder of the Committee to Protect Journalists and sits on its board. He received a bachelor’s degree from Harvard College and a master’s degree from the London School of Economics and Political Science. In 1992, he was named a MacArthur Fellow, and in 2010-2011 he was a fellow at the Leon Levy Center for Biography at CUNY. A native of Baltimore, he lives in New York City.