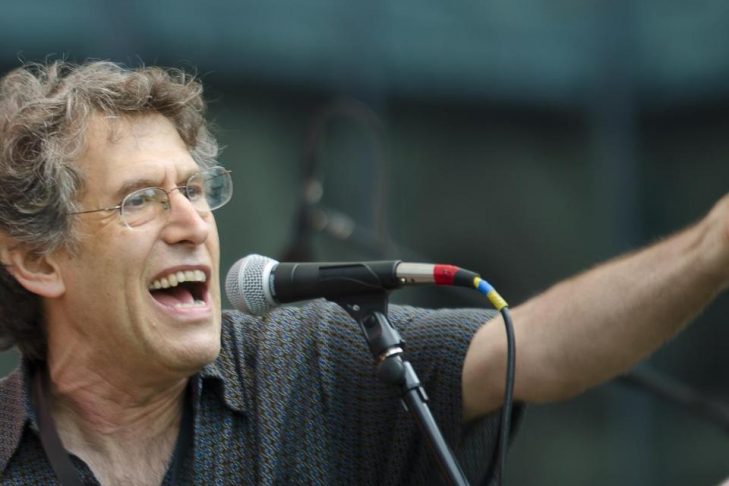 The Jewish Arts Collaborative (JArts) has recently transformed its programming into virtual presentations in a format the organization calls JLive.

Laura Mandel, executive director of JArts, noted that three segments—art, music and food—are addressed in the online format. For Mandel, it’s a win-win situation in which the featured artists are supported and new Jewish work is created. “We’re showing and understanding what culture is,” said Mandel. “In this format, you can show art, music and food [demonstrations] to 1,000 people online, as opposed to 100 [in person]. People will be entertained and learn something as well.”

A diverse roster of artists, musicians and culinary experts is scheduled to appear online through Aug. 15. JewishBoston talked to three presenters who will showcase their art and music the week of June 1.

Deb Putnoi is the founder and ongoing artistic force behind The Drawing Lab. She describes her venture as a place “to use drawing as a language to bring people together and build community.” Putnoi founded The Drawing Lab almost two decades ago in response to 9/11. With a background in the arts, as well as museum education, she was moved to “expand people’s access to art. I wanted to make a big cultural change. Although not always seen, drawing is everywhere.”

Putnoi begins Drawing Lab sessions with this cardinal rule: “Don’t say you can’t draw.” To illustrate her point, she asks participants to draw a line. No one, she asserted, draws a line the same way. Additional prompts for the line-drawing session include making a bumpy line, jagged line and broken line, and drawing with both hands at the same time or drawing with the dominant hand.

“The lines are drawn with our own pressure,” Putnoi said. “That is our visual voice on the page, and no one’s line is better than anyone else’s. Our visual language is made up of different kinds of lines, dots and dashes. The way we put them on the page creates a drawing.”

In her Drawing Lab sessions, Putnoi has also challenged her students to draw an emotion with the intention that drawing does not have to be realistic. She has similarly guided people to draw in response to prayer. She noted that The Drawing Lab can be presented in myriad places. Temple Israel of Boston sponsored a tailored Drawing Lab for a year. “The work we do in Drawing Lab takes on the life of the venue,” Putnoi said.

At Temple Israel, Putnoi created “touch boxes” that consisted of various Jewish objects, including a shofar and a havdalah candle, and had people exclusively draw from touch. Her students also drew to the music of different prayers. “The Drawing Lab became a community space,” she said. “The custodian at Temple Israel came and drew during his lunchtime.”

Based in Roslindale, Rachel Hammerman segued from creating sculptures in college to drawings. The decision was as much artistic as it was practical. Hammerman lived in New York City at the time and was looking to make her work portable enough to be able to travel on the subway. Hammerman told JewishBoston that her abstract ink drawings create original and distinctive worlds. She invites viewers of her work to project their feelings and interpretations of it.

However, in the middle 2000s, Hammerman needed to supplement her income and found herself drawn back to clay. This time her sculptures were much smaller and took the form of wedding-cake toppers or holiday ornaments. It wasn’t until her best friend had a baby in 2015 that she shifted to the mezuzah business. It was a natural fit for Hammerman, who grew up in an Orthodox community in New York. “I’m still very mindful of my roots and associate the mezuzah with them,” she said. “To me, the mezuzah is like a tattoo for a house. I lived in London during the Iraq war and saw shadows of mezuzahs that were once on doorposts. It’s a small object you can easily walk by, but once you see it, it sparks the memory of a whole people. I wanted to make the mezuzah relevant again.”

Many of Hammerman’s mezuzahs are whimsical. “A mezuzah case is an art object, but there is no reason it can’t be a fun thing,” she said. To that end, Hammerman’s mezuzahs range from tributes to rock bands, fairytale characters and book themes. She noted that she tries to work with characters or icons that have a Jewish back story. For example, one of her popular mezuzahs depicts Paddington Bear, whose story was partly based on the kindertransports to England during World War II.

In her JLive presentation, Hammerman hopes to inspire people to make their own mezuzahs. She will demonstrate how she puts clay over a test tube and then places wire hangers on each side. She said it’s a good indoor project to do with children. “Making the mezuzahs touches on the two sides of my brain,” she added. “I can work on a drawing for a year but make a mezuzah in a few days.”

Hankus Netsky describes himself as “a cultural activist musician” who played a pivotal role in the 1970s resurgence of Eastern European Jewish music and culture.  He told JewishBoston it took until the latter part of the 20th century for people to take Jewish music seriously. “By the time I discovered this music, it was being marketed as a very obscure academic subject or a tacky Vegas-style show,” he said. “It was literally on life support. The main issue with Eastern European Jewish culture, in general, was that Jewish educators had marginalized it. It was Zionism versus the shtetl. I rediscovered this music as an artistic wellspring.”

Netsky currently chairs the Contemporary Improvisation program at the New England Conservatory. Additionally, he is the founder and director of Klezmer Conservatory Band, as well as the research director of the Klezmer Conservatory Foundation, which is dedicated to showcasing traditional Eastern European Jewish music. In the early 2000s, Netsky was the education director at Yiddish Book Center, and during his time there, he curated the Lee & Alfred Hut Discovery Gallery. The permanent exhibition brings together mementos of leading figures in the Eastern European Jewry renaissance. Additionally, Netsky took an ethnographic approach and learned about the music and culture from Hasidic cantors.

Netsky traces his intervention on behalf of Eastern European Jewish culture and music to a cathartic moment he had as a teenager in music summer camp. He heard the last line from a Bertolt Brecht drama—“I feel like a man who carries a brick around to show the world what his house was like.” The line not only resonated, but also inspired Netsky’s lifelong mission to investigate Jewish music.