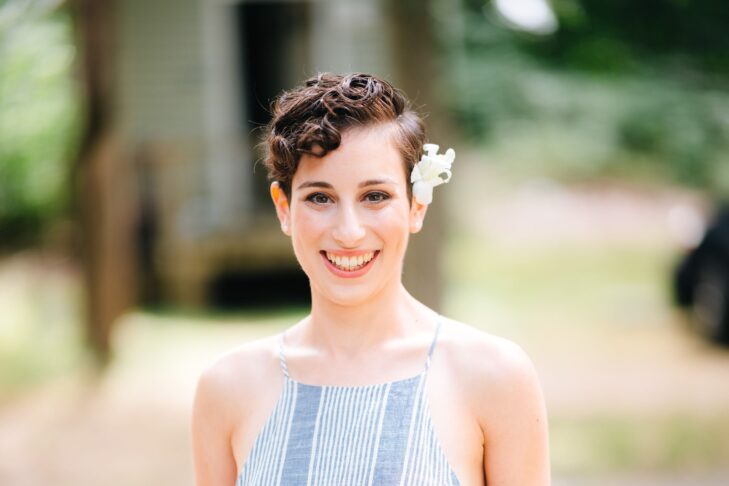 I am in a field in a small park in Wellesley on a mild spring day. My partner and I are alone, seemingly the only people there on a weekday afternoon during a pandemic. I hesitate for a moment, and then, channeling Julie Andrews in the opening number of “The Sound of Music,” I run across the grass. I shout “ahhhhhhhhh,” as if I could fill the whole world with the sound of my voice. I let loose the cry of a person who has lost dreams, plans and a sense of security, but can still feel the pulsing joy of being heard by the universe.

Five months later, I read Parashat Ha’azinu, and I pause at the opening words: “Give ear, O heavens, let me speak/Let the earth hear the words I utter!” (Deuteronomy 32:1, NJPS translation).

As we open on this parasha, Moses has just given the speech of a lifetime, retelling the narrative of Israel and restating the laws they have received. It would seem that after all this recounting, Moses has already said all he could possibly say. But he has been told in the previous parasha—and so we also know—that he is approaching death. Suddenly Moses’ time is running out. If there is anything else that he needs to say before he dies, he needs to say it right away.

When Moses opens next to speak, what emerges is shira, or song. This is the second of two times in the Torah that we see Moses sing. The first is the Song of the Sea, after crossing the Sea of Reeds—an indisputably remarkable experience for the Israelites as a community, and certainly for Moses as an individual. Now, too, is an intensely emotional moment in Moses’ life. He is coming to his last word, his swan song. Soon Moses will ascend a mountain, and this time, he won’t come down.

His first word in the song, “ha’azinu,” derives from the Hebrew word meaning “ear.” Even from the first word, Moses’ voice rings with poetic language. Instead of using the simpler “listen,” Moses says, “Give ear.” Rashi explains that ha’azinu is an act of Moses bringing in the heavens and earth as witnesses. Moses is worried that after his death, the Israelites might say that they never agreed to a covenant. Having heaven and earth witness his words ensures that the Israelites will be seen as committing to the covenant; and if they one day break the covenant, then God can respond accordingly. Rashi holds that even heaven and earth themselves can respond with drought, famine and destruction in the event that the Israelites transgress.

Although he presents a somewhat cynical Moses—and reasonably so, after what Moses has been through with the people—Rashi simultaneously gives us a version of Moses who cares so much about what he has to say that he must call upon all of nature to listen. We know that Moses is invested in the fate of the Israelite nation and we know that he is contemplating his own mortality, so what emerges next is heightened, metaphorical, fantastical language about God, sin and consequences. We don’t have any melodies to know if Moses actually sang, but we do feel the metrical structure of the lines and we can hear the music of the language.

As I read Parashat Ha’azinu, I think about musical theater, about the way in which each element of most musicals—speech, song and dance—serves to carry the plot of the play forward. Scenes with spoken dialogue lead into songs, which then, at times, lead into dance numbers. That is, when the emotion in the scene grows too big for spoken word, the characters have to sing. Similarly, when singing can not do enough, the characters simply move into dancing because only the body and music can communicate the emotional world of the characters. So when Julie Andrews’ Maria breaks into song, the music allows her to let out how stuck she feels in her convent life; when Liesl leaps through the gazebo in “Sixteen Going On Seventeen,” it is because her teenage love is too big to contain to any words at all.

Similarly, Moses enters into shira because it is the only way that he can express what he has not already said. And when he begins with “ha’azinu,” he is not just calling the heavens and earth to witness, but he needs their active presence; what he wants to say is too big to share with just the people. We are in a musical, and this is the final number.

As Yom Kippur approaches during this unprecedented time in the world, there is likely much on our hearts and minds. Like Moses, we too have much to say, and the stakes are high, because the gates are closing. “Quick, hurry up,” we are told. We must forgive God, forgive each other and forgive ourselves—before it is too late. Even though we know that the gates of forgiveness are always open to us, it is useful for us to have a deadline, to feel as if our time is truly limited. So, how can we express what we may not even have the words to do so? What song do we sing?

I see Moses calling out “ha’azinu” across the desert landscape, so close to the promised land and yet so impossibly far. He reflects on his lost dreams and finds that he still has music and poetry within him and that it is the best way—maybe the only way—for him to express what is still in his heart.

We, too, still have language. And when simpler words fail to convey what we need, we have poetry. We have music. We have singing. We have dancing. We have shouting. We have skies to invoke and earth to awaken.

Somehow, with all that we have lost this year, we still have everything we need.

Leah Carnow (she/her) is a rabbinical student in her second year at Hebrew College. Originally from Los Angeles, Leah has lived in the Boston area for 10 years, where she also teaches yoga and works as the rabbinic intern and vocalist at Temple Sinai in Brookline. Prior to rabbinical school, Leah worked in regional and fringe theater as an actor and director.
Never miss the best stories and events! Get JewishBoston This Week.