Close
Never miss a great event again!
Get the best Jewish events delivered to your inbox every Thursday with JewishBoston This Week.
By signing up, you agree to our Terms of Use and Privacy Policy.
Pathways to Freedom
View all What is the artwork?

As I engaged with people across the city, they each shared their unique perspectives and received an assemblage of stickers that they mounted to a button they keep.

Many have asked: What exactly is on the button, and how does it correspond to my answers?

Well, I am here to explain the artwork that makes up the 48 designs of stickers.

The first question: When did you and your family come to Boston?

The answers are visualized with photographs of Boston landmarks in sepia tone. I took the photos myself, and they include the SS Constitution, City Hall, the T, Zakim Bridge and the State House. The sepia is used to foster a sense of history, past and nostalgia. The goal of this question is to allow strangers to connect and share their family’s history.

The second question: Are you free?

Here I use solid colors—green, red and amber—to represent a traffic signal. Just as the question is direct, the visuals are designed in a straightforward way to mimic your gut reaction. 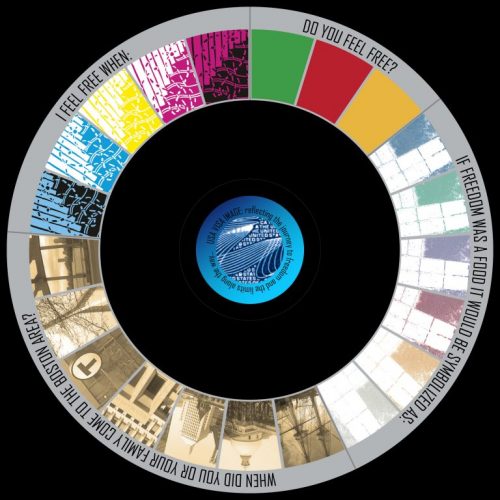 The third question: When do you feel free?

The imagery in this sticker is a drawing I did. The drawing has two components. One is a bar graph of the number of refugees from Turkey who landed in Greece over the course of 2017. The second part of the illustration reflects the boats and journeys taken by refugees. I chose this imagery because while researching this project, I volunteered in Lesvos, four miles from Turkey on the Aegean Sea. Not only did I want to help with the crisis, but I wanted to understand what it was like to cross a body of water and arrive in a place where you believed you were free and would have a new life. As much as this project is about Boston, it is also about journeying from somewhere, and I wanted to include that visually. These images are in cyan, magenta and yellow and black, the typical printing colors. They are bold, bright and have the most visual contrast of all the stickers—and I think that speaks to the idea that the moment when you feel free is bold and unique.

The fourth and final question: Which food symbolizes freedom?

This imagery is a silkscreen of the Freedom Trail. Whenever I started to talk about this project in the research phase, everyone in Boston mentioned the Freedom Trail, so I wanted to include it. I paired it with this question because the line of bricks is a symbol—they are not an actual trail to freedom. The walkway represents an emblematic path through historic moments where groups sought freedom, and reminds its walkers why freedom is a worthy cause. In many ways, I think the Freedom Trail is a symbol of Boston that contains history as well as hopes and aspirations for the future of a city on a continuing quest for freedom. These images are in pastels to represent a freedom trail that has been worn down, and these images are less defined, maybe even blurry, to visually reflect the loose interpretation of the content.

In addition to the four question stickers, everyone will receive three extra stickers. One is a blue gradient, representing the terrain, from the sky to the sea, that is traveled on the journey to freedom. The second is a section of the USA VISA stamp. It represents the limits on immigration.

Finally, everyone gets a black-and-white geometric patterned sticker to reflect where they encountered me. Each of the 25 locations are different patterns. I wanted to create a distinct aesthetic from the other images. They are black and white, because where you interacted with the cart is a fact, and is likely the only hard data we are using in this project.

See, and hear, the stories come together around the Soldiers and Sailors Monument on Boston Common, displayed April 25 through May 2. Find more info here.