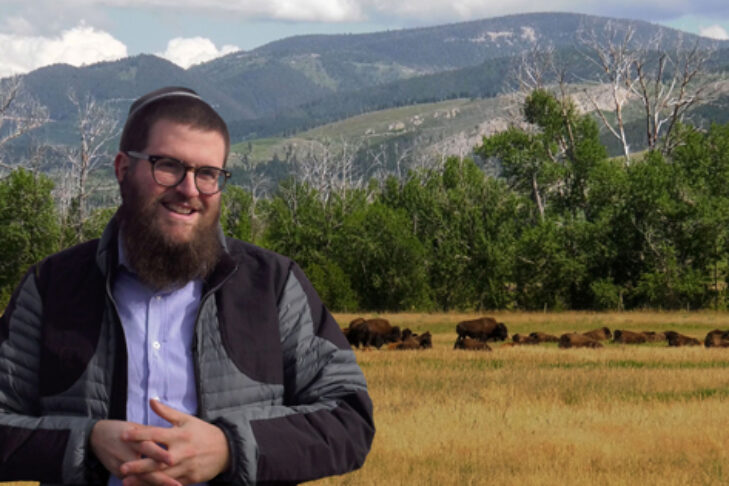 The old American imperative, “Go west, young man,” is not a cliché when it comes to Chabad Rabbi Chaim Bruk. Bruk is featured in the new documentary “The Rabbi Goes West,” an engaging tale about his Jewish version of westward expansion. Bruk has given the phrase a new twist as he ambitiously tries to minister to the 2,000 Jewish families scattered across Big Sky country. Since Bruk and his wife, Chavie, arrived in Montana by way of Crown Heights, Brooklyn—the epicenter of Chabad-Lubavitch life—three Chabad Centers in Bozeman, Missoula and the Flat Valley have been established in the state. The Bruks opened the Bozeman Chabad Center, the first and largest of the three, in 2007.

In the first scene of this appealing documentary, Bruk is still making good on his promise to bring mezuzahs to every Jewish household in Montana. Given his passion for all things Torah, he just might succeed. Like the most successful Chabad rabbis, Bruk is smart, personable and full of chutzpah that also doubles as passion. Like his predecessors, he is a pioneer who embraces his new community, specifically to save Jewish souls. When he jokes that a mezuzah and a gun will guarantee a family’s safety, he means it. He even goes to a shooting range to fire AR-15s with his 12-year-old daughter.

In 75 minutes, Boston-based co-directors Gerald Peary and Amy Geller have brilliantly shown how Chabad, and Bruk as its representative, have complicated Montana’s small Jewish landscape. Bruk may be happily gaining entrée into Jewish homes throughout Montana by affixing mezuzahs on doorposts, but in the process, he has ruffled a few feathers among some of Montana’s progressive Jews.

As Peary and Geller show, Bruk is not the only pioneering rabbi in the state of Montana. Three other rabbis from Judaism’s liberal movements are also featured in the film. Among them is Rabbi Francine Roston, a Conservative rabbi who came to Whitefish looking for something more than her suburban congregation in New Jersey could offer her. Many people might remember Roston as the target of neo-Nazi hate in 2017. The incident was widely covered in the media, and in the film Roston recalls the threatening phone calls and email messages she received at that time. She also notes how supported she and the Jewish community felt by their neighbors, who were overwhelmingly not Jewish.

Bruk encounters a subtler form of anti-Semitism when he is a guest on a local radio talk show. A caller challenges him about George Soros, the wealthy Jewish financier whom white nationalists and those on the extreme right consistently demonize. Bruk glosses over the caller’s anti-Jewish views. His usual cheerfulness and optimism fall flat when he tries to assure the man that most Jews “aren’t like George Soros.”

Peary and Geller make it clear that the progressive rabbis featured in the film are not fans of Bruk’s overt sexism (he never gives a satisfactory answer as to why his very capable wife can’t lead services) and his rigid observance of Judaism. His messianism feels extreme. Yet he’s also the same passionate guy who throws a “Scotch and Sushi” party to celebrate Sukkot. If anything, Bruk is a lot of fun to be with and he seems to have boundless energy.

If following Bruk around is not memorable enough, Peary and Geller movingly show that he and his wife are unique in the Lubavitch world. Unable to have children, the couple has adopted five children, including a black son. As Bruk proudly looks into the camera, he declares: “[A]ll the racists out there, come and get me. I’m a Montanan, I’m Orthodox, and I have a black child.”

Much of the success of “The Rabbi Goes West” rests on Peary and Geller’s wise approach not to take sides. Their even-handedness works well in telling a story about a Haredi guy who gives up everything he knows to move to the “Wild West.” His sole purpose is to enable Jews to do mitzvot—good deeds—and learn some Torah. It’s a bonus if he educates some folks who are not Jewish during his quest.

In the end, Bruk is staking a place for himself in Montana, as well as in the world to come. For the past 12 years, he has been steadfast in his mission. During that time, he has also felt the power of God in Big Sky country in a new and novel way, and that’s a beautiful thing to witness.

“The Rabbi Goes West” closes the Boston Jewish Film Festival on Sunday, Nov. 17, at Somerville Theatre. Filmmakers Gerald Peary and Amy Geller will appear with Rabbi Chaim Bruk after the screening to discuss the film and participate in a Q&A. Find more information here.