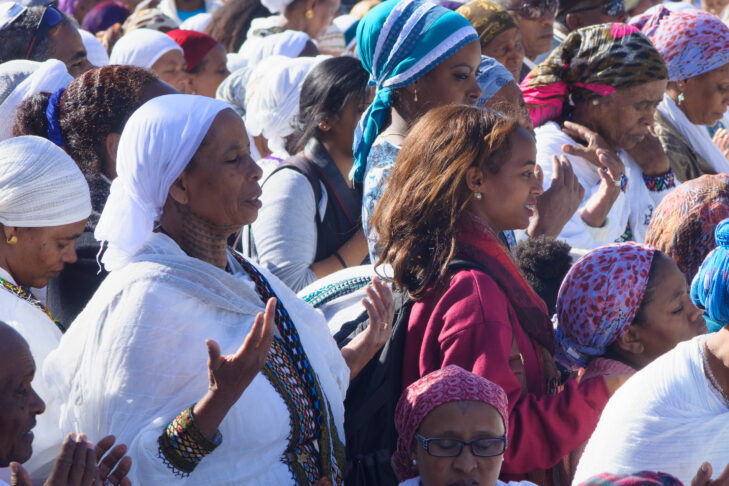 In the Shadow of Moses: New Jewish Movements in Africa and the Diaspora
Los Angeles: Tshei Publishers, 2016
280 pages

With this volume, editors Daniel Lis, Williams F. S. Miles, and Tudor Parfitt aim “to put on the radar of students and specialists of Africa the existence and growth of Jewish communities of color,” as well as to deal with a developing religious and ethnic question for the 21st century: “What is the role of Black Africans, both in Africa and the African Diaspora, in the redefinition of Judaism and Jewish identity?” (p. xii).

In the opening chapter, “African Judaism and New Religious Movements: Repainting the ‘White House’ of Judaism,” Miles frames contemporary African and Black communities practicing Judaism as New Jewish Movements (NJMs), and situates what he terms the “extraordinary flourishing of African and African Diaspora Judaism” within the established literature of New Religious Movements (p. 3).

By focusing on populations in Nigeria (specifically the Igbo) and Madagascar that claim Israelite ancestry through Lost Tribe descent, Miles illustrates how NJMs often involve a transition from mainstream Christian denominations (including Sabbatarian churches, which observe Saturday as the day of rest) to “Messianic Judaism” (a Jesus-centric faith involving the adoption of some Jewish rituals, observances, and holidays, but which Jews around the world would recognize as a form of Christianity) before finally arriving at rabbinic Judaism.

Parfitt’s chapter on “Race and History: The Black Jews of Loango” deals with a group for which there is a “meager amount of information available” (p. 40), evidence is “sparse” (p. 44), and that has “a largely unknowable past” (p. 45), but that resided between 1500 and 1915 in what today is the western part of the Republic of Congo. (So much for a new Jewish movement.) Parfitt discusses this vanished community in the context of “the anxieties and concerns which the concept of ‘Black Jew’ in general provoked in Western society” (p. 45), and the trouble Westerners have had in conceptualizing the existence of Black Jews.

In “They were Looking for Christians and What They Got Were Jews,” Lis describes the Christian concept of “Lost Tribes” and how 19th-century Christian missionaries—in particular those from Basel, Switzerland—nourished Jewish identity construction in Ethiopia, Ghana, and Nigeria, and to some extent in Sierra Leone, where they also operated.

While African “adherents of Judaism (the religion)—or Judaizers—represent a tiny fraction of their respective ethnic groups, the overall identification of an Israelite origin is often shared with larger sections of the ethnic (and mostly Christian) groups to which they belong” (p. 51). Lis argues that this is at least partly the result of Christian missionary influence. For example, “with the introduction of literacy and the Bible to the Igbo, Christian conversion efforts led many Igbo to recognize themselves and their customs in the stories of the Old Testament and the religion of ancient Israel” (p. 59), and to identify as Jews even without embracing Judaism.

Meanwhile, Israelite identity was clearly in existence among the Beta Israel in Abyssinia (the Jews of Ethiopia) prior to 19th-century missionizing there—though opposition to the missionaries may have led to “a revival of Beta Israel identity” (p. 67)—and Lis is careful not to disparage “the authenticity of Black African Jewish identity” (p. 69). (For more on Judaism and Jewish identify in Nigeria, see here. The Beta Israel are discussed below.)

In “The Color of Judaism,” the only chapter situated in Europe, Aurélien Mokoko Gampiot and Cécile Coquet-Mokoko describe, based on six years of fieldwork, the challenges currently facing Black Jews in France, where there are an estimated 550,000 to 600,000 Jews. While the total number of practicing Black Jews is not known, an estimated 200 families of African and West Indian descent who practice Judaism reside in the greater Paris area. Numerically marginal, Black Jewish men and women are active in attempting to normalize “their presence in Jewish spaces in France by becoming visible” to other Jews, as “their identification with the Jewish people is inseparable from the issue of visibility” (p. 85).

Also concerned with visibility, Janice R. Levi’s “Making Visible the Invisible,” the volume’s fifth chapter, focuses on the “House of Israel” community of Ghana’s Sefwi Wiawso district. Though its claim to Judaism was first made in 1977, following its founder’s theopneusty, Levi contends that the community and its wider ethnic group may indeed be, as the House of Israel’s members assert, descendants of Jews. Prior to 1977, a legacy of imposed Jewish invisibility had been inculcated in the Sefwi, she contends, due to “persecution, colonialism, or the inability to freely choose a religion” (p. 107). Levi points to the community’s “oral narratives, performative memory (i.e., institutionalized memory), and external commentaries” as sources that she argues should be privileged no less than “Western paradigms and preferences of historical documentation” when it comes to authenticating Jewish origin (p. 109).

Nathan P. Devir’s “The ‘Internet Jews’ of Cameroon: Inside the Digital Matrix of Globalized Judaism” describes the Beth Yeshourun community in the village of Saa, whose then-Christian members began learning about Judaism through the internet in the late 1990s and who for the most part do not posit a Jewish genealogy for themselves. Alone among this volume’s contributors, Devir intimates some doubt about the flourishing of NJMs, remaining uncertain about this approximately 50-person community’s future. Though the internet has proved useful for learning about rabbinic Judaism and making connections with global Jewry, its members have no real Jewish infrastructure. Furthermore, given that most of them do not claim a shared genealogy with other Jews, casual Jewish “ethnocultural belonging is not an option” for the Beth Yeshourun in Cameroon (p. 127). (For a different perspective on Judaism in Cameroon, see here.)

Isabella Soi’s “Judaism in Uganda: A Tale of Two Communities” chronicles one NJM’s rise, difficulties, and more recent renaissance. She recounts the Baganda leader Semei Kakungulu’s religious shift from Christianity toward a biblically-based Judaism, and eventually rabbinic Judaism, in the late-1910s and 1920s, as well as the subsequent travails that the relatively isolated religious community Kakungulu founded experienced under the antisemitic dictatorship of Idi Amin, whose persecutions reduced the community to some 300 members. Though the now-revitalized Abayudaya still have limited contact with Jews residing in the Ugandan capital (who are mainly foreign businessmen and diplomats) and have not been recognized as Jewish by the state of Israel, they have many international Jewish links (including in Israel), which have aided them in developing religious, educational, and economic infrastructure.

In the volume’s eighth chapter, “A Matrix of Jewish Phenomena in Sub-Saharan Africa,” Marla Brettschneider writes about recent “Jewish or Jewishly related” developments in Côte d’Ivoire and Gabon, paying particular attention to gender issues. NJM growth there has occurred within the colonial and slavery legacy of the communities in these countries, with Judaism or ideas related to it (such as forms of Kabbalah) satisfying “individual and communal aspirations for meaning and self-identification” (p. 169).

Now numbering about 140,000 in Israel, Ethiopian Jews (previously known as the Beta Israel) are by far the largest of any Jewish community connected to sub-Saharan Africa. Israeli scholars Steven Kaplan and Hagar Salamon speculated in a 1998 paper for the Institute for Jewish Policy Research that Ethiopian Jews “may be per capita the most talked about and written about group in the world.” This is likely still the case some 20 years later.

In chapter 10, “Building Bridges: Ethiopian Israelis Take a Second Look at Ethiopia,” Len Lyons investigates “where Ethiopian Israelis themselves, both past and present, believe their home to be” (p. 201). Even in Ethiopia, the Beta Israel community saw distant Jerusalem as its true home. However, though the state of Israel has quite possibly “done more to support the Ethiopian community than any country has ever done for an immigrant group,” Ethiopian Jews, many of whom have now adopted a Black racial identity along with their Jewish one, have come “to the conclusion that they are second-class citizens” in Israel (p. 212). Lyons argues that their full integration will take a long time. Nonetheless, though they may not yet “feel at home” in Israel, Ethiopian Israelis “profess strongly the idea that Israel is their home” (p. 218). (For more on Ethiopian Judaism, see here.)

Chapter 9—Sheldon Gellar’s “‘Ye Shall Not Oppress the Stranger’: Sudanese and Eritrean Asylum Seekers in Israel”—and chapter 11—Martina Konighofer’s “Who Opened the Seven Seals?: Rastafarians and African Hebrew Israelites of Jerusalem”—are perhaps the most puzzling in this volume on NJMs. The groups covered in those chapters may be part of new African diaspora movements, but it is difficult to see how they are in any way Jewish movements, and the two authors do not even attempt to make that case. There is no indication that African migrants/asylum seekers in Israel, Rastafarians, or African Hebrew Israelites of Jerusalem fit the NJMs pattern in which non-Jewish faiths such as Christianity (including “Messianic Judaism”) eventually lead to rabbinic Judaism or to an affiliation with global Jewry.

Emphasizing what Miles terms the “extraordinary flourishing of African and African Diaspora Judaism” (p. 3), In the Shadow of Moses’s preface is preceded by a map of Africa and Southwest Asia purporting to show “Countries with Jewish and Judaizing communities covered in this book” (p. x). These are Senegal, Sierra Leone, Republic of Congo, Angola, Sudan, South Sudan, Eritrea, Côte d’Ivoire, Ghana, Cameroon, Gabon, Uganda, Nigeria, Madagascar, Ethiopia, and Israel. (France, though the focus of a chapter, is absent from the map.) As one progresses through the book, however, it becomes less and less apparent that several of the African and African diaspora communities covered in this volume can be accurately described as new, flourishing, or even Jewish. Indeed, by the conclusion of this otherwise informative collection, it is evident that the supposedly new “Jewish and Judaizing communities” of at least seven of the countries (Senegal, Sierra Leone, Republic of Congo, Angola, Sudan, South Sudan, and Eritrea) listed on its map of Africa have not been considered at all.

As mentioned, In the Shadow of Moses is geared toward students and specialists on Africa. Nonetheless, it is also a generally useful volume, with chapters of interest to anyone seeking material on Jewish identity among Black Africans.

Earlier reviews of this book appeared in Reading Religion—a publication of the American Academy of Religion—and in The Jewish Voice. For more by Shai Afsai about African Judaism, see here.