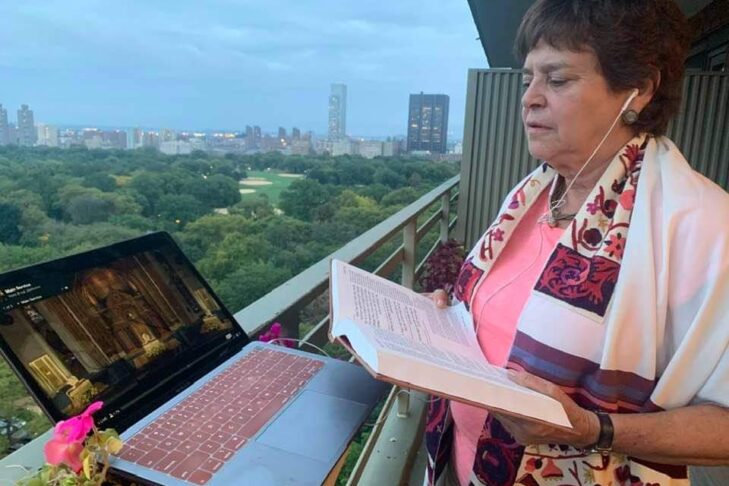 In this pandemic year, Beacon Hill photographer and social justice activist Brenda Bancel stepped away from her camera to showcase the work of others. Her curatorial gifts are on display at Hebrew College, where 40 photographs make up the astonishing exhibit “Faith in Isolation Expressed.” The images reflect how the three Abrahamic religions have adapted ritual and tradition in this unprecedented public health crisis.

“This moment was so jarring and shocking; the last thing I wanted to do was put it in my camera and see it again and again,” noted Bancel in a recent interview. “I didn’t feel compelled to do my own work but was very happy when I looked at the photojournalism of people getting creative to be together across the faith groups.” Bancel asked local faith communities to send her pictures related to worship and presented them alongside related images worldwide that she culled from Getty Images. “It was beautiful to see people fight for their faith in those pictures,” she said. “They knew they needed that faith and dug deep to be creative and support one another.”

Bancel said Hebrew College and its Miller Center for Interreligious Learning & Leadership was the right home for the exhibit. She and Hebrew College’s director of development, Rosa Frank, had been wanting to collaborate on an interfaith art project in this moment of COVID-19. The exhibit, which is supported by a grant from CJP, is also the inaugural project of Hebrew College’s new arts initiative.

“Faith in Isolation,” Hebrew College’s first in-person public exhibition since the pandemic began, is on view at the school’s Newton campus through June 6. Deborah Feinstein, a member of the arts initiative and a Hebrew College board member, described the show as “impactful and emotional.” She added: “Faith does not necessarily have to be God-centric. There also has to be trust and connection.”

Feinstein said she and Bancel chose to leave the photographs unframed for the exhibit—they outlined the individual pictures with thin black lines. “We wanted the exhibit to be light and pressed directly on the wall for aesthetic and practical reasons,” said Feinstein. “We’re hoping to take the exhibit to another venue and did not want to ruin the wall in the process of dismantling it.”

Rabbi Or Rose, the Miller Center’s founding director, noted that hosting “Faith in Isolation” was important to Hebrew College. “Hebrew College is an intentionally pluralistic institution,” he said. “We work diligently to engage Jewish students and leaders from different walks of Jewish life. We place great value in people who believe and practice Judaism differently to study together, sing together and march together. Those things necessarily involve holding the tension between similarity and difference.” Rose, Bancel and Feinstein concurred that the exhibit is what Rose described as “a very powerful tool for open-hearted conversations about loss, mourning, resilience, hope and creativity.” The images range from poignant to astonishing. There is the man dressed in a Santa Clause suit sanitizing the pews of a church. Muslims answer the call to prayer in a parking lot. Makeshift dividers in the women’s section of the Western Wall keep worshippers socially distanced.

Rose also praised Bancel for her “creative and compassionate vision, and the humility to say in a time that she could not pick up her camera, she looked to other photographers to have this conversation.” He also commended the college’s arts committee for “advocating and helping us to embody an understanding that aesthetics of the spiritual life are very important.”

“Faith in Isolation” was further illuminated in a panel discussion in which Rose and Bancel were joined by faith leaders Dr. Celene Ibrahim, a teacher and scholar of Islam, and the Rev. Dr. Shively T.J. Smith, a professor at Boston University’s School of Theology. The three panelists began the virtual program citing the images in the exhibit that particularly impressed them. Dr. Smith described the photograph of a commemoration of the 70th anniversary of the liberation of Auschwitz over Zoom. “The entire scene,” she said, “created space virtually to remember the journeys of our ancestors and our communities. That picture represents a deep resilience in our faith and can be the catalyst to create and imagine what it means to us to convene as people of faith.” 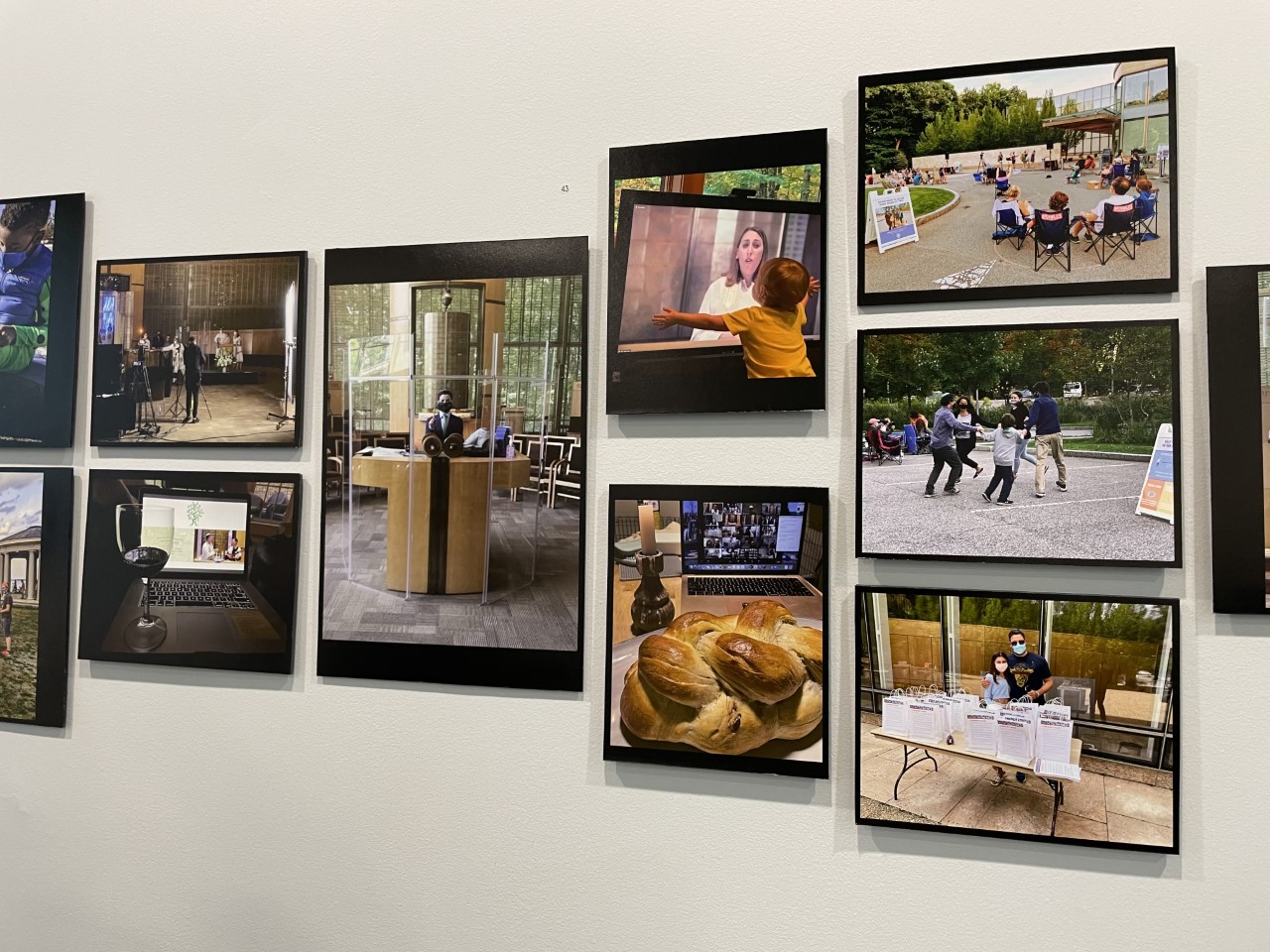 A picture of the Kaaba in Mecca, where people leisurely walked, impressed Dr. Ibrahim. Normally a pilgrimage to Mecca is a crowded, even somewhat chaotic, experience. But the pandemic, she said, brought the need for order and organization that had not previously existed. She pointed out that new technologies were put in place to book times and keep people safe in the pandemic. “I relish the chaos at times, but also crave this orderly, organized way of experiencing spirituality and the sacredness of that place,” she said.

Rose said a photograph of a masked African American boy with a sign that said “Rest” moved him. “[The image] moved through me over several levels,” he said. “What is rest in a time of pandemic? What does the earth, the divine, say to us about the normal rhythms of life and the ways we’re constantly restless?” He noted that rest has come at a heavy price in this past year of social uprising. The pandemic, he said, “laid bare long-standing injustices and in some cases exacerbated it.” He added, “What will it be like for this boy to grow up, given that systemic racism is jarring and painful?”

Bancel, who briefly appeared during the program, brought up the powerful image of the sequoia that she so elegantly wrote about in her statement for “Faith in Isolation.” She said the sequoia is one of the oldest and largest species of tree in the world, and that it continuously grows in its lifetime. It’s not unusual for the trees to live 3,000 years and grow to be 300 feet tall. But they can only reproduce if their pinecones are set on fire to open up and release the seeds within them. “For the sequoia to bear life, it must suffer,” she wrote. But fire is not the greatest danger to the trees; it is their shallow roots, which cannot support their great height and weight.

Bancel described that for the trees to live, they grow near each other and pull on each other’s roots for support to stand tall. She observed that the sequoias’ survival is the perfect metaphor for the importance of community in a pandemic. “We all pulled each other up to make sure we didn’t fall,” she said. “It showed that even the strong are vulnerable, and that sometimes the suffering can lead to a beautiful harvest.”

Learn more about “Faith in Isolation Expressed” and schedule a visit here.