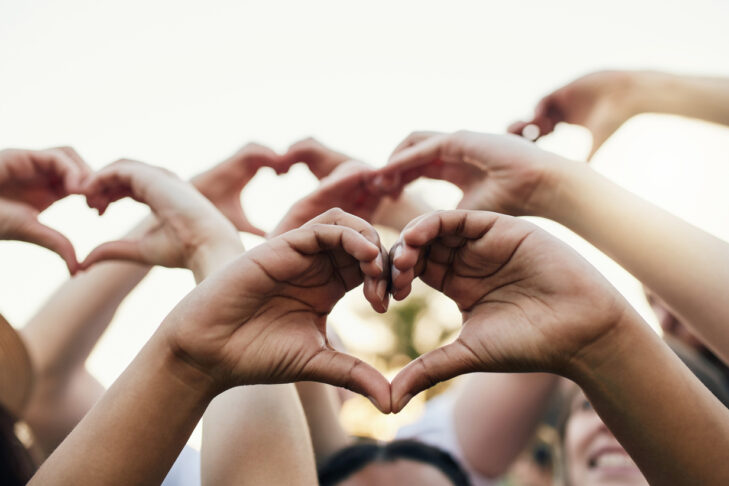 George Floyd. Remember that you and I witnessed his murder on a Minneapolis street. Remember that a police officer, Derek Chauvin, pressed his knee against Floyd’s neck as Floyd pleaded for breath, for mercy, for his life. George Floyd is an African American man and Derek Chauvin is a white police officer. Floyd’s death compounds the grief and shock and brokenness in our country during these intense, grief-soaked months in the midst of a pandemic.

My new column “And Then” appears in the wake of George Floyd’s murder. Baruch dayan emet—blessed is the true judge. That’s what Jews say when first hearing about someone’s death. It’s difficult to associate any blessing with Floyd’s killing, and the protests and riots that followed across the country. But we forge ahead to gather our blessings, deploying them to repair a world where our children can grow up with justice and love.

The journalist Krista Tippett is the host and executive producer of the excellent radio program “On Being.” Tippett’s beat is spirituality. She masterfully explores the subject with guests who are poets, writers, rabbis, imams, ministers, musicians, teachers and others who contribute their deep and affecting observations on the news, trends and culture. The program is based in Minneapolis, and Tippett wrote a thoughtful letter to her listeners this week, assuring them that she and her staff are safe. We are not alone in this pandemic of virus and violence, she observed. “The landscape of practical human care and moral imagination, of social creativity and courage—and of ‘resistant joy’—has never sat more vividly alongside all the terrible news,” she wrote.

My wish is for this new column to be a vehicle to ruminate over questions that need our attention. This week, I bring to you the sobering results of the Anti-Defamation League’s annual “Audit of Antisemitic Incidents for 2019.” Historically, the 40-year-old audit has been a mix of good and bad news. These latest results point to the highest number of antisemitic incidents that the ADL has tracked in four decades of collecting data. In a recent webinar, ADL CEO and national director Jonathan Greenblatt said, “There have been more incidents in the 48 contiguous states than we’ve ever seen.” The overall 12% uptick in antisemitic episodes in 2019 accounted for a 56% increase in assaults, including five deaths.

Robert Trestan, ADL New England regional director, conveyed similar news for Massachusetts in 2019. He recently told JewishBoston that “the data tells the story that antisemitism continues to permeate American society. People are feeling increasingly emboldened to let their hate come out of the shadows and display their antisemitism in public. Particularly concerning is the specific targeting of Jewish institutions and schools, and the 61 cases of harassment recorded statewide.” Trestan added that Massachusetts had the fourth-highest number of incidents in the overall audit.

To find some much-needed succor during this terrible week, I listened to an inspiring discussion about God and interfaith commonalities with Yossi Klein Halevi and Imam Abdullah Antepli. Klein Halevi is a writer of books about Jewish Muslim and Israeli Palestinian relationships. He is a senior fellow at the Shalom Hartman Institute in Jerusalem and codirects the institute’s Muslim-Jewish Initiative with Antepli. Antepli teaches at Duke University and Duke Divinity School and was the university’s first Muslim chaplain.

The two men are pioneers in Muslim Jewish initiatives, and their hour-long conversation delved into the genesis of their friendship, as well as what moved them about the other’s faith. Antepli began by saying: “My friendship with Yossi is an incredible contributor in my efforts to indigenize myself in Jewish spaces. I have deep Muslim beliefs and also [acknowledge] that Jews and Muslims adore and glorify the same God.”

These two men impress me with how they connect through an intimate knowledge of and respect for the other’s faith. Antepli affectionately confessed that he has “Shabbat envy.” He said: “Here is a religion that refines and crystalizes [complete rest]. There is a lot of rich Jewish language around slowing down and starting internal journeys.”

An observant Jew, Klein Halevi said he doesn’t often pray formally, but he’s in “constant conversation with God.” He added, “God evolves in all kinds of ways, and one of the ways is through the growth [of human beings.]” One of Klein Halevi’s most cherished possessions is a prayer mat customarily used in Muslim prayer, on which he sits to wrap his tefillin each morning.

Antisemitic incidents are on the rise. But two men have overcome the difficult, convoluted history of the Middle East and beyond to create an abiding friendship. Their relationship is a flicker of hope in what the Polish poet Adam Zagajewski praises as “the mutilated world, [with] June’s long days.” And yet it is also a world where a black man pleads, “I can’t breathe,” and eight minutes and 47 seconds later dies in police custody.

“We need you to speak up for us and with us,” the African American pastor of the local Baptist church tells my white Jewish congregation over Zoom. My family and I have gathered around a laptop to say the Kaddish virtually with our clergy and the pastor in memory of George Floyd.

Tonight, we have chosen a side. And now we cannot just remain dispassionate observers.