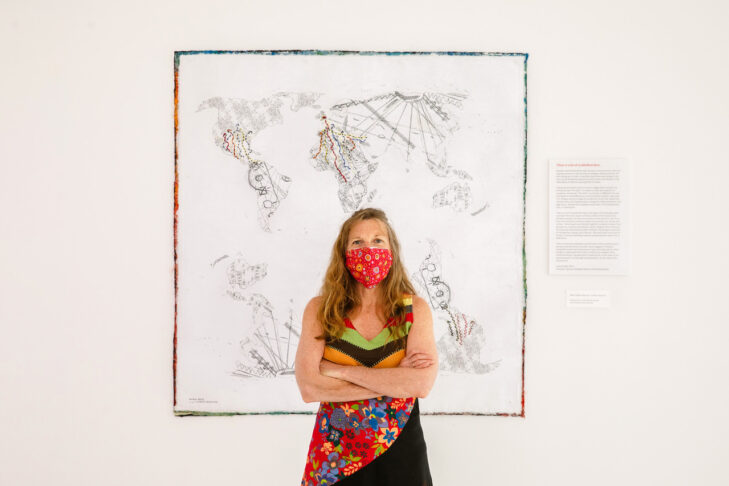 When I went to the Majdanek concentration camp near Lublin, Poland, it was in twilight, with a sooty silhouette. The shadows, even the ones I cast, startled me. I was with a group of people, yet I felt entirely alone. The number of Jews murdered at Majdanek is estimated to be between 50,000 and 78,000. Majdanek is also known for the butterflies the children carved into the walls of their barracks—butterflies etched with pebbles and fingernails. The butterflies have come to symbolize the 1.5 million children who perished in the Holocaust.

The world has always been tragic. But in the middle of the 20th century, in one of the most cultured countries in the world, Jews, Romani, LGBTQ people and the disabled were systematically exterminated. The world was silent except for the collective beating of hearts wild with fear. “Where was everyone?” I once asked my father, a World War II veteran. He quietly said, “We didn’t want to know.” When my father held me for the first time, on the second-to-last day of 1960, he must have been stunned that I arrived such a short time after the most devastating rupture in modern history. His brother-in-law was among the first wave of army physicians to liberate Buchenwald concentration camp. He didn’t tell anyone what he witnessed there until he was an old man.

The will to live, and the miracle of art, merge in local artist Sandra Mayo’s powerful creations. Mayo sees this combination as the foundation of resilience. Mayo, who is from Buenos Aires and makes her home in Lexington, has explored resilience in eclectic work abounding with bright, ingenious metaphors.

Her new interactive exhibition, “Beyond Trauma: Roots and Routes,” is part of the Leonard Bernstein Festival of the Creative Arts at Brandeis University and its theme of “buoyancy.” And the show’s title is much more than a pun—Mayo takes various emotional routes and risks in her work to plumb the roots of trauma, immigration, resiliency and sociopolitical events. As someone who lived through Argentina’s Dirty Wars of the 1970s and ‘80s, her work and the biographies she showcases have purposeful elements of trauma. “Life stories,” writes Mayo, “are a consequence of the geopolitical circumstances of our times.”

Mayo describes her work as “mixed media with a focus on printmaking and embroidery.” The two forms, she said, “bring pieces together that are a metaphor for listening to stories. And they represent how people keep stitching stories again and again. People internalize stories in the present. They change stories by adding something that resonates what they currently live with. Whatever resonates in the present moment, it gives another layer of meaning to their stories. That’s how people keep going; they reshape stories. This reshaping is what I am trying to capture.”

Two Holocaust survivors, women who have lived in Buenos Aires since they left Europe during the Second World War, embody the resiliency Mayo portrays. Mayo observes that the resiliency and heroism of these women were complex. These women perfected a balancing act of magic and will, in which they held two opposing emotions at the same time. Sara Rus came to Argentina from Poland but was first arrested at the Paraguayan border. She was jailed and, although she didn’t know Spanish, appealed to Argentina’s first lady, Eva Perón. Two months later, she was released. She and her husband had a daughter and a son. Her son, Daniel, was one of “the disappeared” of the Dirty War and his body was never found.

Rus’s life’s work has been to uncover what happened to Daniel. She appealed to the Vatican and the United States government. She became an active member of the Mothers of the Plaza de Mayo, a group of mothers who demanded that the Argentinian government tell them where their missing children were. In Mayo’s interpretation of Rus’ story, she depicts Daniel in silhouette, reminding me of Majdanek. Outlining Daniel is a haunting stand-in for his lost body.

Ruth Weisz-Paradeis fled from Germany to Buenos Aires in 1939. Her son, Marcelo, and daughter-in-law, Susana, were casualties of the Dirty War. Mayo was taken with the horrific story of how Marcelo’s captors brought him to his parents’ house for Sunday dinners. The captors always broke bread with the family, another form of torture. At one point, they brought Marcelo’s 6-month-old son to dinner. The baby was later found abandoned at the Buenos Aires zoo and inexplicably returned to Ruth. Years later, Ruth saw Marcelo and Susana’s murderer on television admitting that he killed them. He was never brought to justice.

Mayo has explored the women’s family history of trauma in genograms. For Mayo, the genogram evokes “pictorial family trees.” They are commonly used in medicine, psychology, social work, genetic research and education. Births, deaths, immigration, marriage, divorce, emotional challenges and physical disease are all considered when detecting hereditary patterns. “Genograms are thus fingerprints of the emotional structure and medical history of a person in the context of a family,” Mayo writes. “My interest in cases of social trauma led me beyond the common genogram symbols into the creation of new ones to represent tragedy, human rights violations like disappearances and torture, but also resiliency and hope.”

Consequences are important in Mayo’s work. A notable example is the meaning she derives from “The Legend of the Tangram,” in which a wise elder carried a rare sheet of glass for a window that he was to deliver to the king’s palace. The old man wrapped the glass in silk and canvas and carefully tucked it away in his backpack for the long journey.

His itinerary had him crossing a desert and many rivers. He navigated forests and fields, bringing him to a high, rocky mountain. When he reached the summit, he saw the palace in the distance. Pleased that he was close to his destination, he tripped and fell down the side of the mountain, shattering the king’s glass.

When the old man unwrapped the sheet of glass in front of the king, he was shocked to see that the glass had not shattered but was in seven discrete geometric shapes. With those shapes, the old man showed the king his home, a camel he had seen in the desert, monks he met on his route, a boat crossing a river and the summit where he fell.

Thinking about Sandra Mayo’s art, here is the lesson I take away from the tangram legend: We carry stories. Sometimes, it feels as if those stories will shatter inside us, but they don’t and they never draw blood. Instead, we rearrange ourselves to access the life stuff of our dreams and disappointments. That is what makes up our common genogram—a genogram that I believe is stamped with the images of butterflies the children of Majdanek carved on walls and hearts.

Sandra Mayo will speak about her exhibition, “Beyond Trauma: Roots and Routes,” on May 1 from 3-5 p.m. in the atrium of the Mandel Center for the Humanities at Brandeis University, where it’s currently on display.