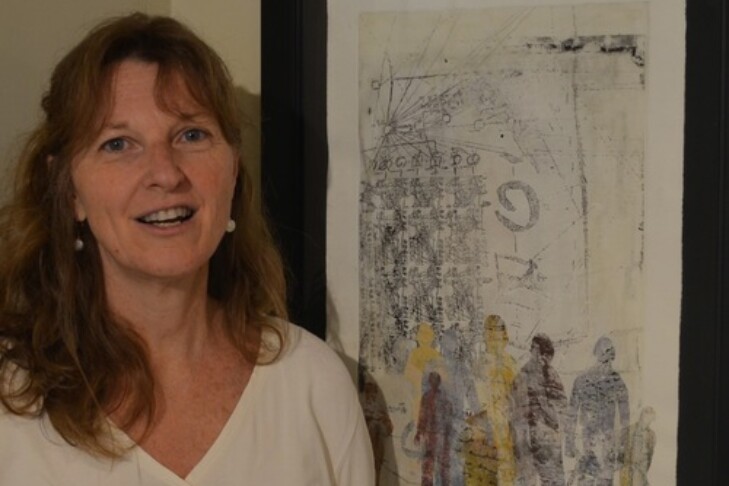 The word that surfaces when considering Sandra Mayo’s evocative, social justice-inspired art is “interconnectivity.” It’s a word that Mayo has contemplated throughout her creative life. In a recent conversation with JewishBoston, the Argentinian-born artist said the Jewish values of “Love your neighbor as yourself,” shalom bayit (peace and internal calm emanating from the home) and tikkun olam (repairing the world) profoundly inspire her.

Based in Lexington, Mayo has most recently deployed interconnectivity in her reinvention of genograms. As Mayo describes them on her website, genograms are the “emotional structure and medical history in the context of a family.” She continues: “My interest in cases of social trauma led me beyond the common genogram symbols into the creation of new ones to represent tragedy, human rights violations, like disappearances and torture, but also resiliency and hope.”

Mayo discovered genograms two decades ago in a graduate course in intercultural studies at Boston University. Two decades later, she transformed their pictorial language to create a genogram based on her family’s migrations.

In anticipation of her JLive appearance with Jewish Arts Collaborative on Friday, Aug. 20, Mayo generously explored the art of the genogram in its micro and macro iterations with JewishBoston. “My family stories represent the micro level of my work,” she said. “I started small, working with the genogram of my family, and then other families. I then took social traumas to the macro level.”

In the course of working with genograms, Mayo innovated the structure’s common symbols for gender identity. Her symbols incorporated tragedy and human rights violations. However, she balanced the rawness of those symbols with depictions of hope and resiliency. “The symbol for abuse incorporated zigzag lines in the middle of the body,” she said. 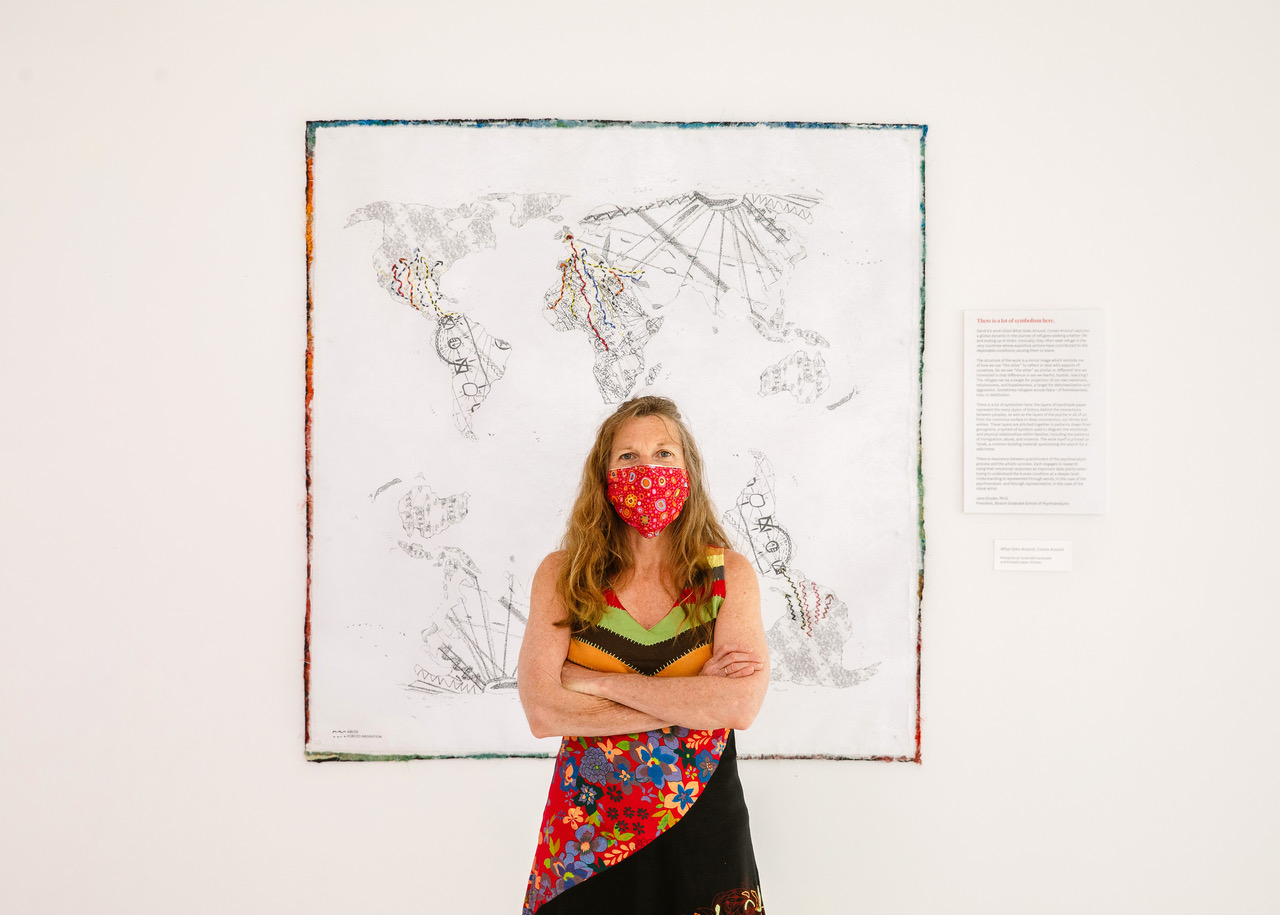 Mayo explained that the wavy lines within the shapes signify how people often flee abusive situations by way of water. “These symbols depict the waves of migrations happening all over the world,” she said. “These migrations are not isolated events but consequences of history and abuses. As Jews, we are very aware of these migration patterns. And now climate change is affecting this paradigm.”

For Mayo, family stories are the sturdy and critical foundations on which she builds a genogram. Her own genogram takes on her story of immigration to Buenos Aires from Turkey and Spain. She then documents other family’s stories, many of which embody social traumas. To that end, she has movingly documented the story of two Holocaust survivors who came to Argentina at the dawn of the Holocaust. Later on, Argentina’s “dirty war” of the late 1970s and early 1980s tragically affected both women.

Sara Rus arrived in Argentina by way of Poland and Paraguay. Stopped at Paraguay’s border, she was arrested and jailed. But this woman, who did not know a word of Spanish, was not deterred. She wrote to Eva Perón, the first lady of Argentina, asking her to intercede in her case. Less than a month later, Rus was released. She and her husband, also a survivor, had a son and daughter. Her son, Daniel, was among “the disappeared” during the “dirty war”; his body was never recovered. 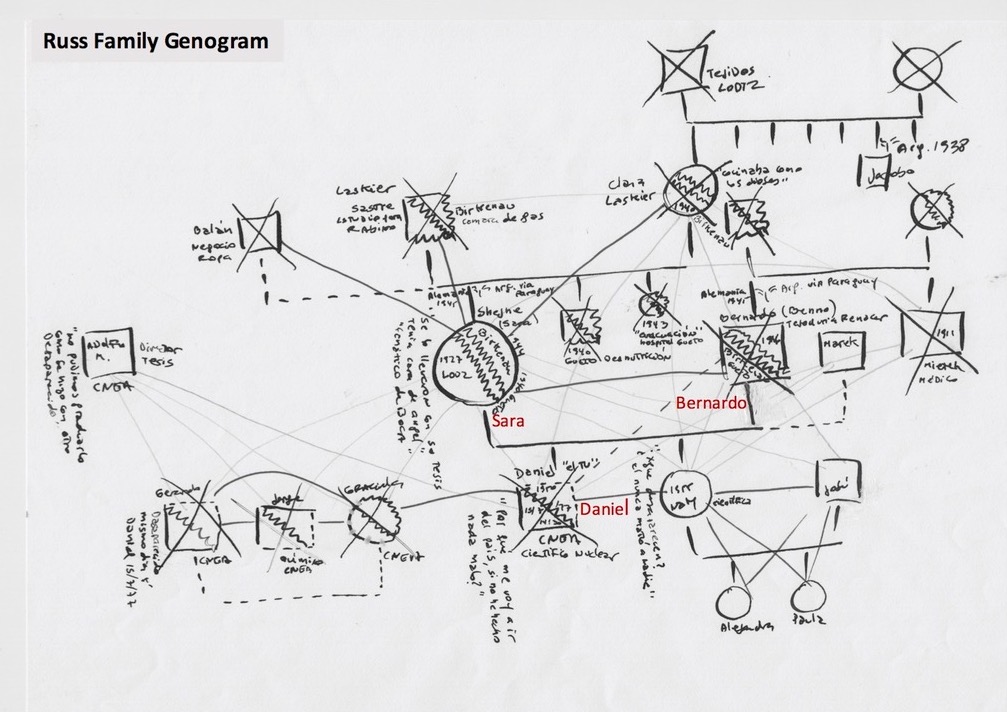 Trying to find out what happened to Daniel, Rus appealed to the Vatican and the U.S. government. Her grief fueled her activism, and she became active with the Mothers of the Plaza de Mayo, a group demanding Argentina’s government to tell them the whereabouts of their missing children. Rus’ strength and resiliency moved Mayo, and she created an exhibit built around Rus’ story. Mayo’s pieces for the show included a depiction of Daniel without a body. “I created a silhouette for Daniel,” recalled Mayo. “I wanted to communicate that there was no closure for Sara’s grief because there is no body. She still listens for a key in the door, hoping that her son will come home.”

Ruth Weisz-Paradeis escaped from Germany in 1939 and raised her family in Buenos Aires. Her son Marcello and daughter-in-law Claudia were among those murdered during the “dirty war.” Mayo was similarly moved by the particular horror of Weisz-Paradeis’s trauma. Before Marcello died, his captors brought him to Weisz-Paradeis’s home every Sunday for dinner. “It was a way to get him to talk,” Mayo said. “The torturers ate with the family, making it a tense and impossible situation.”

At one point, the henchmen brought Marcello’s 6-month-old son to dinner. The police later found the baby abandoned in the Buenos Aires zoo, and he was miraculously returned to Ruth. Years later, Ruth saw Marcello’s murderer on television. The man admitted that he was responsible for Marcello and Claudia’s deaths but was never punished.

For Mayo, Sara and Ruth’s stories connect to the larger human story that she depicts in her genograms. “Even if we live in our own bubble, we are not immune to policies and politics of continents and countries,” she said. “They shape not only societies but individual lives and their families, like the lives of Ruth Weisz-Paradeis and Sara Rus and your life and mine.” 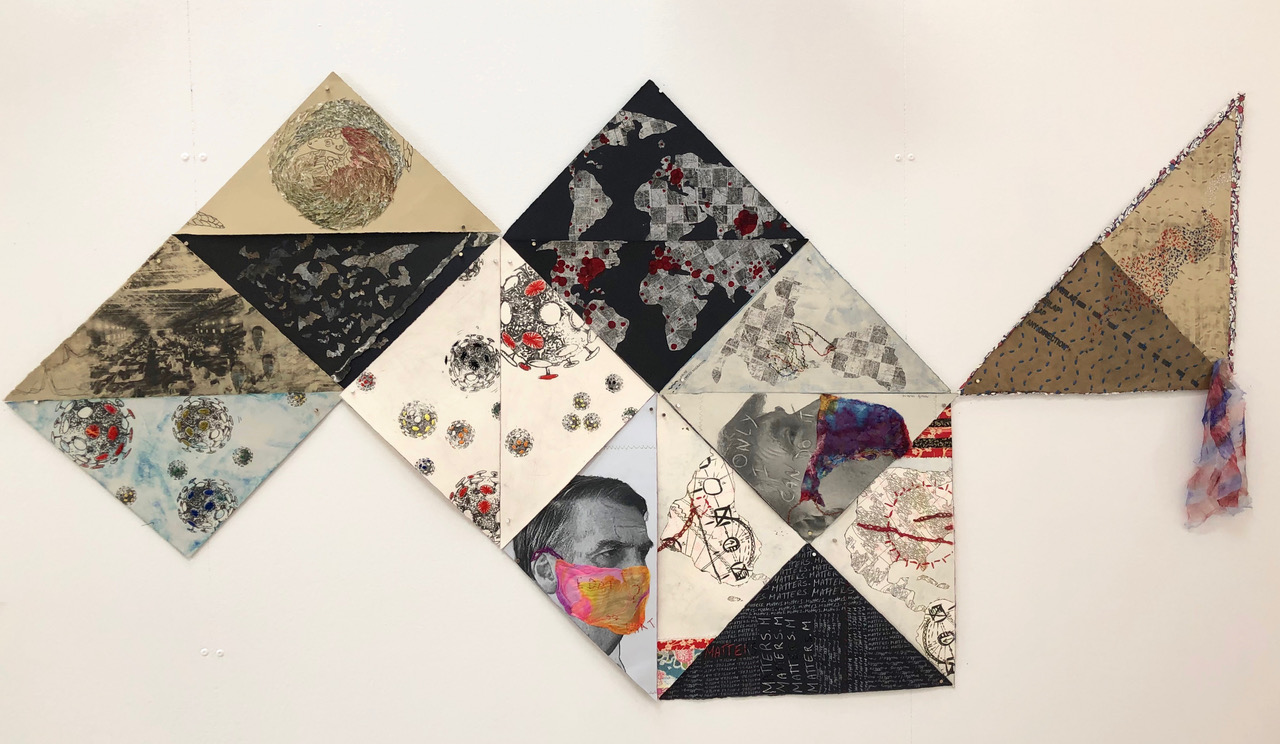 Mayo’s current project examines resiliency through depictions and interpretations of the pandemic. She begins by asking: “How do we survive COVID, which comparatively speaking is not as traumatic as political and physical abuse? And yet we need resilience to confront the pandemic.”

Mayo gathers her artistic and political interpretations of COVID in a piece she calls “Fragments of the Year: Reflections on Social Trauma.” The familiar tinker-toy models of the virus are on one panel. Politicians whose irresponsible policies led to COVID-related deaths occupy another panel. Mayo’s intention is to present history writ large as she conjures the Black Lives Matter movement in word and picture and the Jan. 6 insurrection with a piece of the American flag. She also leaves a panel intentionally blank, inviting viewers to contribute to the exhibit.

“I see the power of art everywhere,” said Mayo. She noted that art absorbs many disciplines. “It doesn’t matter how you do art,” she said. “Whether hanging it on your walls or creating it, I’m an advocate for all sorts of ways to include it in our lives.”