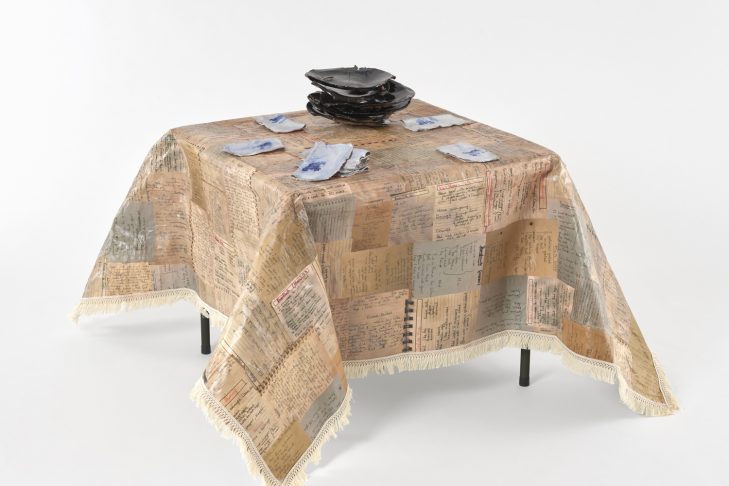 “Around My Mother’s Kitchen Table” by Caron Tabb (Courtesy photo)

Born in South Africa, raised in Israel and now living in the United States for the past two decades, artist Caron Tabb has a new art show that tells her immigration story through mixed media pieces. “Of Two Places” opened last week at Beacon Gallery in partnership with the Jewish Arts Collaborative, and runs through Sunday, Oct. 27.

Tabb recently gave me a tour of the highlights of her first solo show. She described her art as existing between painting and sculpture. “Flat surfaces didn’t offer me enough,” she said. “I needed to move to a three-dimensional space, which gives me a lot more to work with.” The result is art that incorporates a mix of materials that are both natural and human-made.

Tabb, a Newton resident, created the 15 pieces in the show over the past two years. Given the level of sophistication and depth in her work, it’s astonishing to learn that she only began taking art classes six years ago. “I’ve come to see my personal journey through my artistic lens,” she said. “My multiple immigration stories illuminate what is going on right now. In doing this work, I realize I have had a lot of white Jewish privilege.” 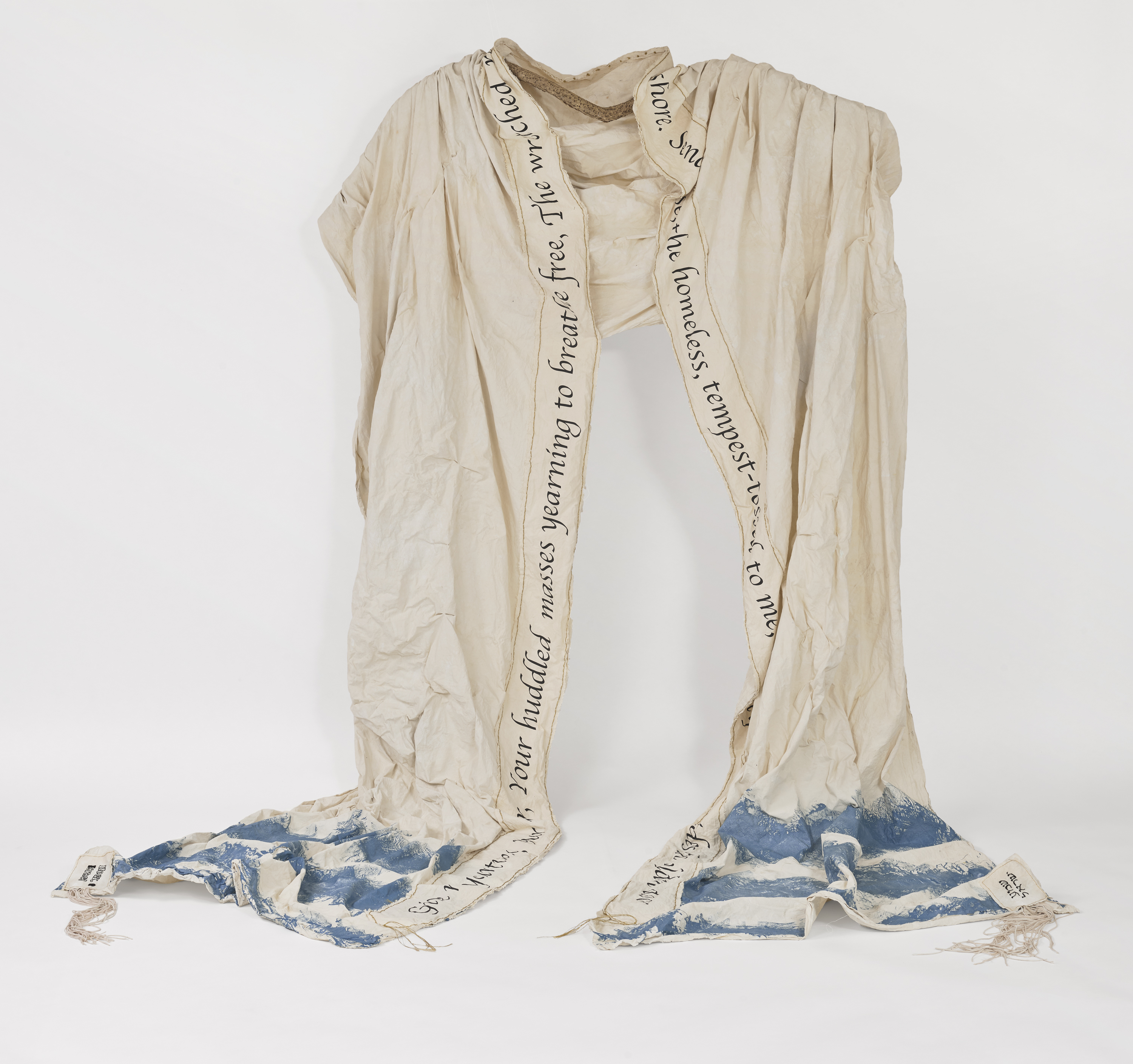 She pointedly displays that privilege in a piece called, “Is This What Our Founding Fathers Had in Mind?” In it, Tabb has attached a suitcase spray-painted gold to a board that evokes the American flag. There is barbed wire at the top. “I’m acknowledging that I held a golden ticket when it came to immigration,” she said. “I pay homage to people who struggled sailing through treacherous waters and even died trying to come to this country.”

At the show’s entry is a chuppah, or marriage canopy, that incorporates the colors of the American and Israeli flags. “The two flags,” said Tabb, “are interwoven. They are the warp and weft of my identity. A chuppah is a temporary shelter that dates back to Abraham. It’s a tent opened on four sides and is meant to welcome the stranger. The idea is that our identities are ephemeral. I’ve taken things that are meaningful to me and stitched them onto the chuppah. There is the marriage blessing in Hebrew and an image of Robert Indiana’s iconic ‘Love’ sculpture in both English and Hebrew.”

The deployment of language—English and Hebrew—is another one of the show’s themes. Tabb’s bilingualism is on display in a piece she calls, “Learning to Read, Write and Comprehend, Circa 2019.” She takes a physical book—a novel by Israeli writer Eshkol Nevo entitled “Homesick”—and stitches Hebrew letters on the pages. The book resonated with Tabb because it takes place in a village near her first home in Israel. “Reading about familiar spaces and buildings brought me back to learning to read and write in a new language,” she said. “I had an ‘aha moment’ with the book. I began stitching the ‘Aleph, Bet’ onto the translated pages. For example, the letter ‘B’ corresponds with the Hebrew letter ‘Bet.’ The idea that you can travel between languages seamlessly is an interesting phenomenon.” 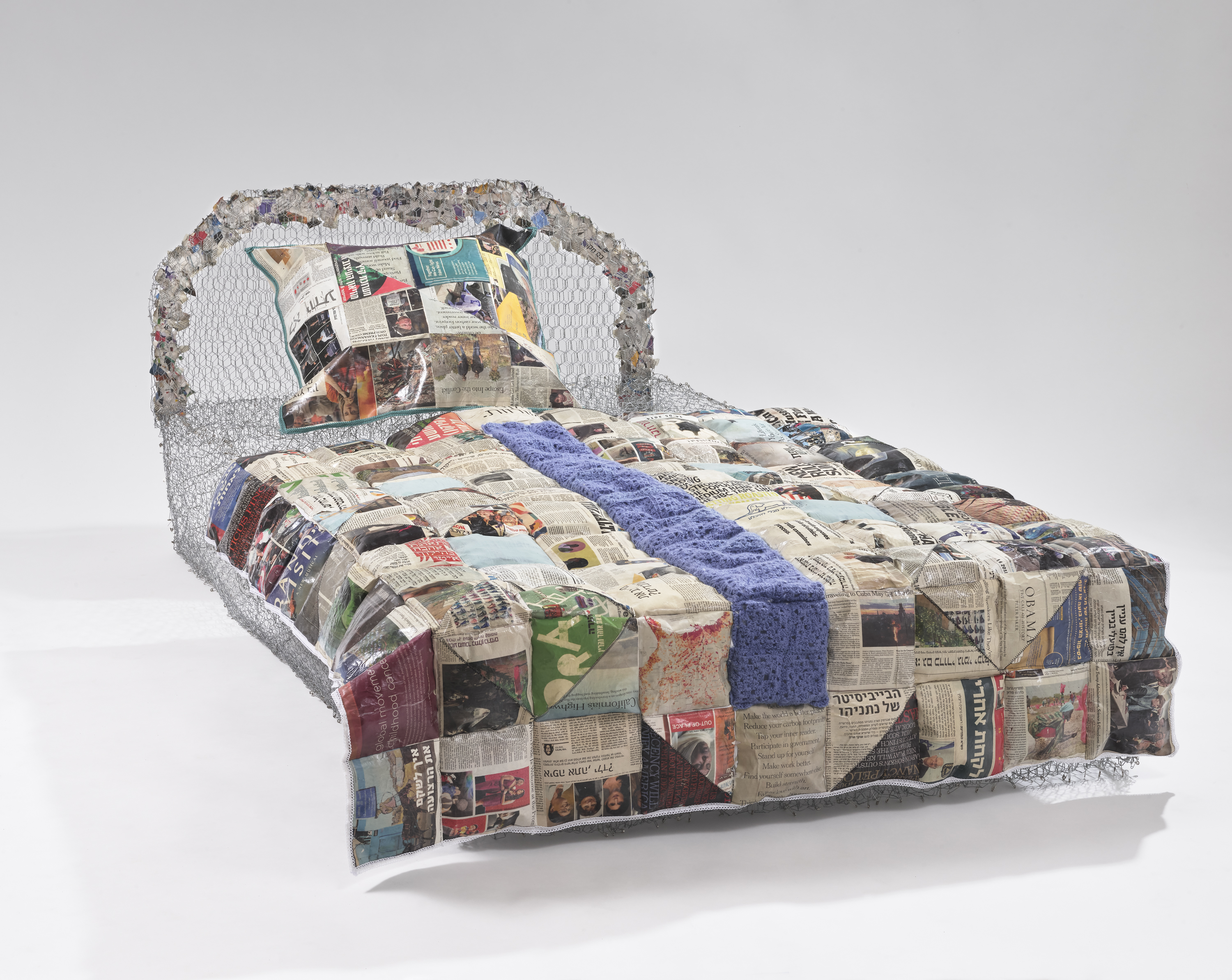 Among Tabb’s political pieces is a full-sized bed made of chicken wire and barbed wire that is held together by safety pins and zip ties. She calls the work, “My (un)Comfort Zone.” The material is a nod to growing up on a moshav, or farm, where she was tasked with collecting eggs. The comforter is made of seven-by-seven squares—the number was chosen for its mystical properties—that are clippings of articles from The New York Times and Haaretz. “They’ve all been chosen very deliberately for content that relate to issues such as mental health, women’s rights, gun control, the Palestinian-Israeli conflict and the arts,” said Tabb. “I also wanted to bring my family into the piece. My grandmothers gave me afghans for my wedding, and instead of cutting up one of those afghans, I asked my aunt to make the spine of the comforter for me. It symbolizes that my family is my spine.”

That notion of family is also poignant for the artist in a piece she calls, “Around My Mother’s Kitchen Table.” The tablecloth is stitched with recipes from different women in her life. “I’m inviting people to sit at my Shabbat table that includes two broken plates symbolizing relatives who are no longer here,” she said.

In “The (Asym)metrics of Loss and Gain,” Tabb starkly demonstrates how she inhabits two homelands. She measures out two sacks of earth—one is from her childhood home in Israel and the other is from the backyard of her current home in America—and balances them on an old-fashioned scale. Tabb said the point is to show how each country weighs heavily at various points in her journey. 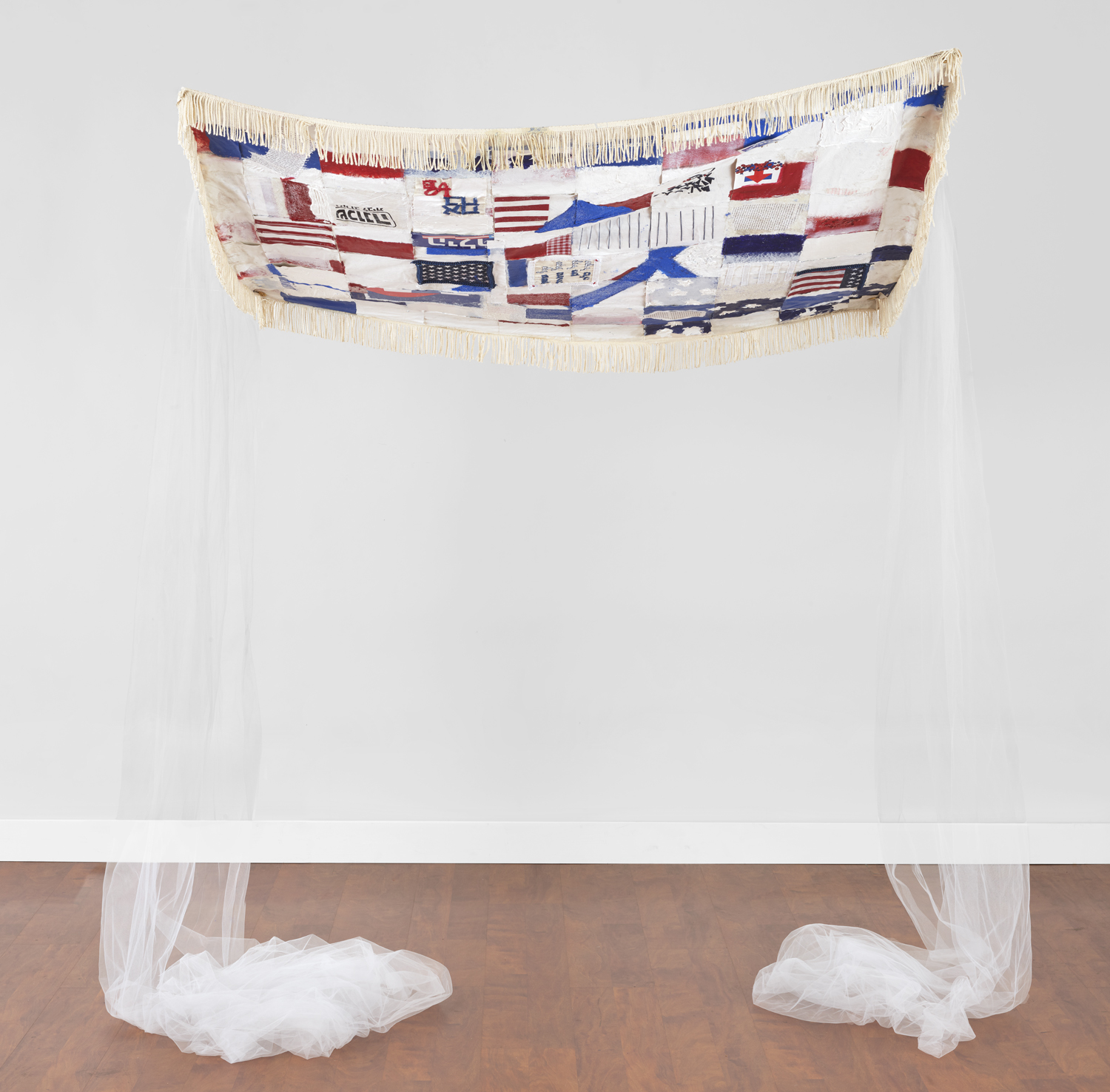 “I Now Declare You” by Caron Tabb (Courtesy photo)

Tabb intentionally does not bring forward the colors of or references to her native South Africa. “In this show, South Africa is prominent yet not visible,” she said. “I went back there to visit when I was 17, and there was still apartheid. I vowed not to return until that system was abolished. When I look at my Judaism and the deep meaning of social justice to me, I recognize that a lot of it came from the injustices of the apartheid system.”

At the end of the tour, Tabb showed me a ceiling-to-floor tallit. In the show, it hangs on a branch. Emma Lazarus’s entire poem, “The New Colossus,” an excerpt of which is on the Statue of Liberty, is stitched on the tallit alongside the traditional prayer that is said as one puts it on. There are also 13 tassels on each side instead of the traditional 613. Tabb said they represent the 13,000 children who were in ICE custody on the day she finished making the tallit.

“My Judaism,” said Tabb, “is a call to action. It’s about social justice and what it means in America in 2019, and what it looks like going forward. Anyone who sees my work can also see themselves in my story. The work evokes the question of what our responsibility is having once been the stranger in Egypt and then persecuted. Where do we stand on the spectrum?”