Close
Never miss a great event again!
Get the best Jewish events delivered to your inbox every Thursday with JewishBoston This Week.
By signing up, you agree to our Terms of Use and Privacy Policy.
“Be The Change”: Jewishly Inspired Public Art Movement
View all

A spectacular example of “artivism”—a portmanteau of “art” and “activism”—will manifest from Aug. 16 through Oct. 26 in the Fenway neighborhood in a public art exhibition called “Be The Change.” Six Boston artists interpret the word tzedek, Hebrew for “justice,” and pay tribute to the humble yet iconic tzedakah box in their large-scale works of art. The exhibition is the brainchild of Laura Mandel, executive director of the Jewish Arts Collaborative (JArts), Caron Tabb, a Boston-based Israeli American artist, and Ruth Messinger, former president and CEO of American Jewish World Service, who is often described as a “social justice warrior.”

“When I saw the word ‘artivism,’ I knew it was the term to describe the ‘Be The Change’ exhibition,” Mandel told JewishBoston. “The word had me thinking: How do we use art as a form of activism? The answers have become a guiding force for us at JArts. Everyone innately understands there is value to this concept of artivism, but [they] don’t always know how to access it. We have given people this baseline tool to be an ‘artivist.’”

Mandel referred to the interactive component of the exhibition—QR codes accompanying each piece of art link people to nonprofits, activists and other resources related to the social justice issues the artist has showcased.

The idea for the project originated with two tzedakah boxes that Tabb created for her 2021 gallery show, “Humanity Is Not a Spectator Sport.” The boxes, or “justice vessels,” as Tabb describes them, honored Messinger and Clementina Chéry, a Boston activist. Chéry founded the Louis D. Brown Peace Institute after her teenage son was accidentally gunned down in Dorchester in 1993. Messinger initiated “Be The Change” after she told Tabb “to represent justice through art.” As she explained, “I dream of seeing a larger-than-life tzedakah box inspired by the Lucite donation boxes that say ‘Change’ in front of the Metropolitan Museum of Art in New York.”

“It’s exciting to take a Jewish concept and put it in the public sphere where people outside the Jewish community engage with it,” said Sophie Krentzman, CJP’s director of arts and culture. “Three of the six artists are Jewish in this intentionally diverse group representing Boston’s different neighborhood communities.”

CJP awarded a $15,000 grant to “Be The Change,” which Krentzman said reflects the importance of culture in Jewish life. “You have an arts organization like JArts that has been putting down roots and working to expand the consciousness of justice in the community,” she said. “Being able to put CJP’s investment and strategy behind [“Be The Change”] creates a powerful partnership.”

Krentzman noted that JArts is piloting “Be The Change” in Boston ahead of exhibitions in both Cincinnati this fall and Los Angeles in spring 2023. As with the Boston exhibition, six artists from each of those cities will grapple with social justice issues of local importance in their artwork. “This is an exciting opportunity for Boston to be an incubator for this kind of work and how it might spread across the country to inspire other projects,” she said.

Mandel said educating the participating artists about justice as a Jewish value was important. The group of six, which includes Tabb, Carolyn Lewenberg, Jason Talbot, Nayana LaFond, Ngoc-Tran Vu and Sam Mendoza Fraiman, met with Rabbi Sharon Cohen Anisfeld, president of Hebrew College, along with Messinger, to study Jewish texts together. “There was value in the Jewish artists learning more of their tradition to underpin their work more strongly. But there was an important element in teaching those who are not Jewish why tzedek is so important to the Jewish community,” she explained. 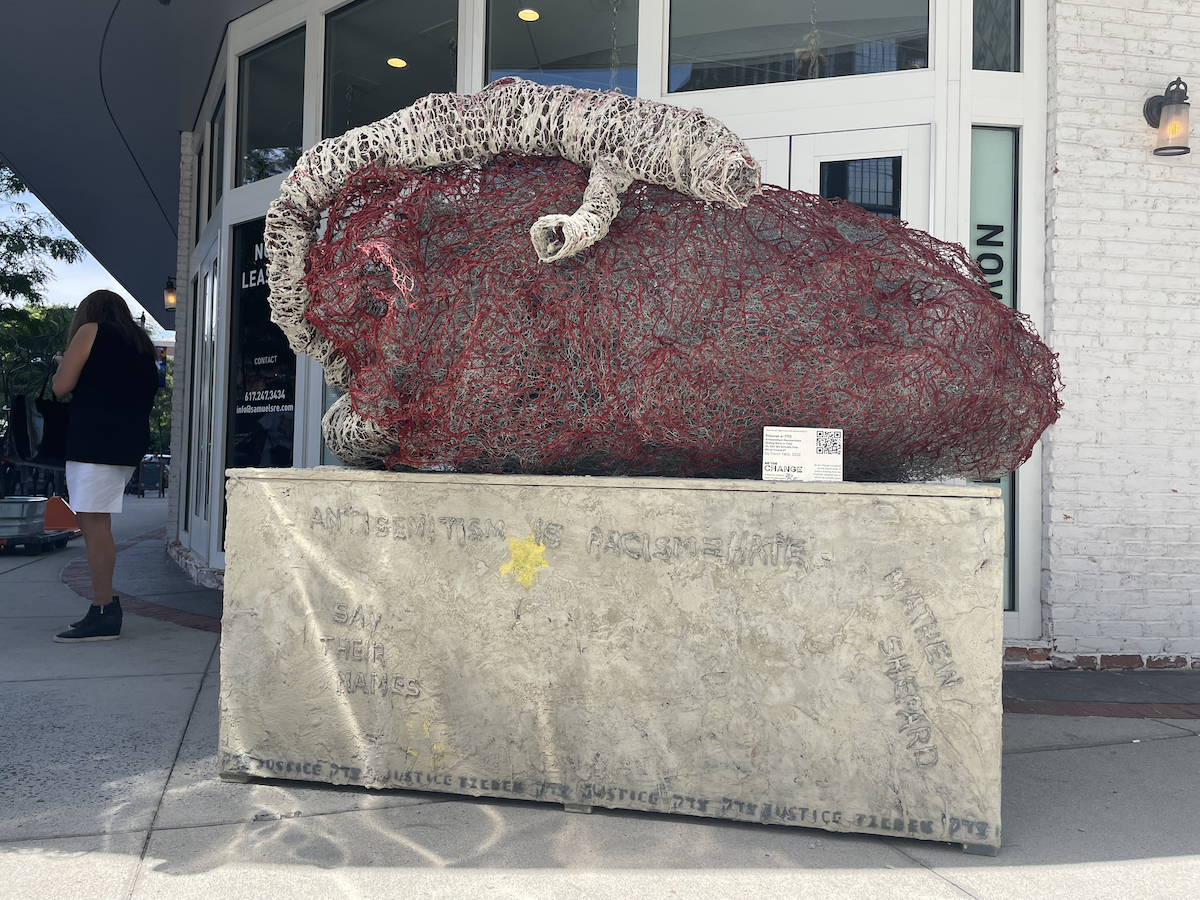 As one of the founders of “Be The Change,” Tabb is passionate about taking “the tenet of tzedek to Main Street USA and engaging passersby on the issues these artists have visualized.” Tabb’s sculpture of a heart made of chicken wire is at the center of “Prisoner a-7713.” She spotlights hate and antisemitism by titling her piece with the number tattooed on Holocaust survivor Elie Wiesel’s arm when he arrived in Auschwitz. Her piece also bears the tagline: “Antisemitism equals racism equals hate, sliding back in time, or did we actually ever move forward?”

Her sculpture rests on a large concrete platform displaying various inscriptions that include the verse “Tzedek, Tzedek” and the image of a Star of David. A single light symbolizing the ner tamid (eternal light) illuminates it. As she worked, Tabb kept a human heart model in her studio that a cardiac surgeon gave her. She recalled that he said, “When I open up somebody’s chest in surgery to repair their heart, there is no difference. Our hearts are, more or less, the same size and look the same. I operate the same way on everyone.” 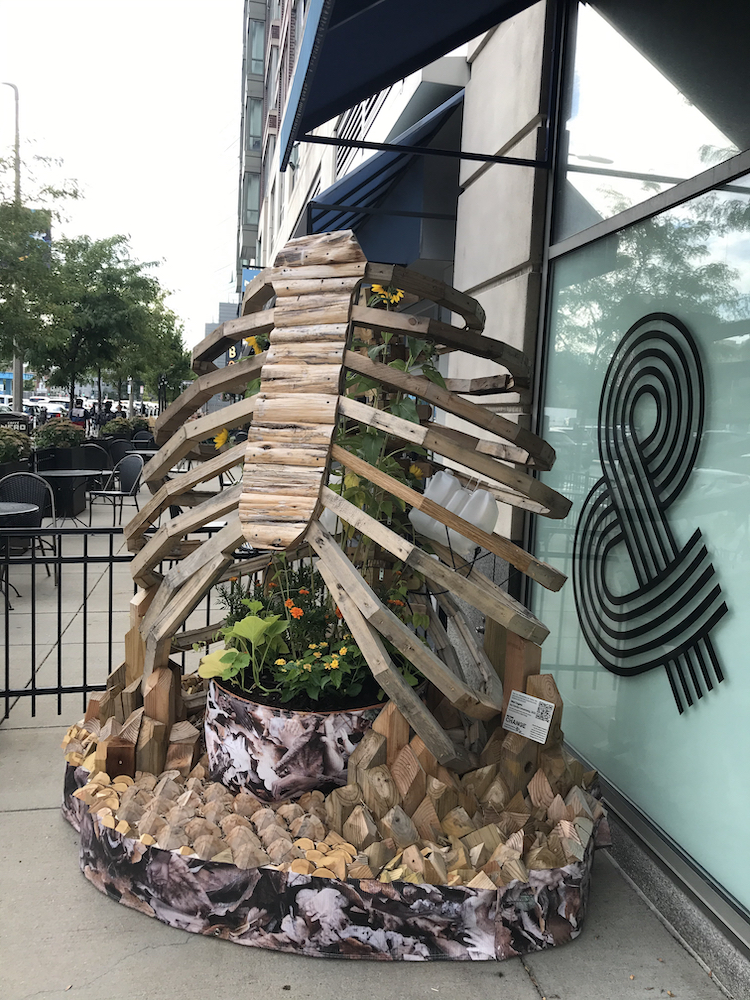 Carolyn Lewenberg’s multimedia sculpture, “Vital Organs,” symbolizes environmental justice with a transparent ribcage she built to grow corn, beans and squash. The sculpture rests on a wood base displaying a collage of hands in different skin tones and leaf litter—leaves that have fallen on a forest or park floor. She initially located the sculpture on a sunny patch of land behind the Egleston Square Branch of the Boston Public Library in Roxbury, where she met Mr. Spencer. Mr. Spencer held court over the small adjacent park most days, and he and Lewenberg became friends. When she was away, Mr. Spencer and his friends watered the three mounds planted in her sculpture, a planting that represents the three sisters in indigenous folklore.

Lewenberg’s QR codes lead viewers to sites that provide information about the Municipal Reforestry Act, which prioritizes tree planting in communities whose environments have been harmed. There is also an opportunity to act on a bill in front of the Massachusetts State House to improve outdoor and indoor air quality in communities burdened by transportation pollution and an ordinance establishing protections for the City of Boston tree canopy. “I learned so much caring for this sculpture,” Lewenberg said. “We built a culture that welcomed people to discuss the earth, their neighborhood and the wildlife in it.” 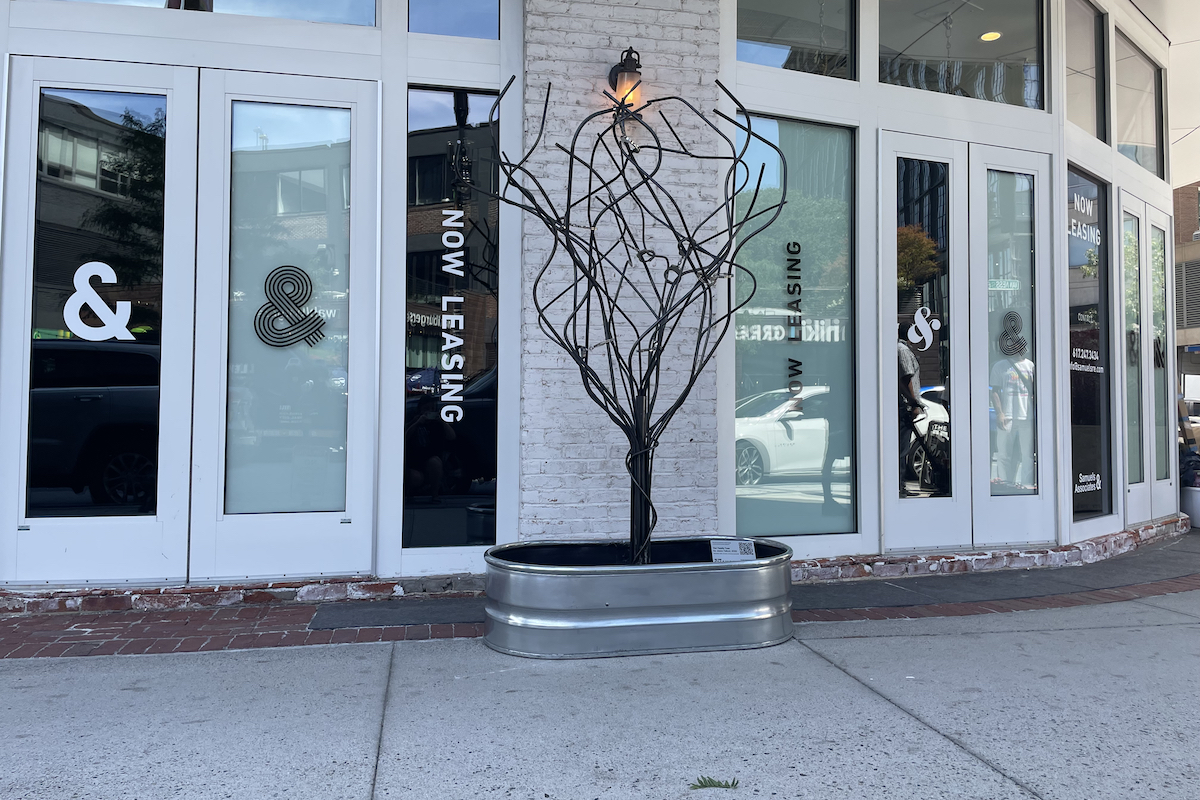 Jason Talbot’s “Our Family Tree” explores racial bias in the criminal justice system. A painter, Talbot is the co-founder of Artists for Humanity, a program for teens guiding them to paid employment in design and the arts. Unlike the symbolic tree of life in Judaism, handcuffs hang from the limbs of Talbot’s tree—handcuffs speaking to his traumatic experience of being cuffed. “Most young Black men I know have experienced handcuffs on their wrists,” he said. “Just like it is ridiculous to handcuff a tree, it’s ridiculous to systematically oppress people with our justice system for generations.”

Talbot recalled that in 1996, he was arrested six times in six months. He admitted that he was not an innocent victim, but his crime (“tagging the streets with graffiti”) was relatively minor. After his arrests, he developed his activist voice. “I want this family tree representation to convey that people make mistakes and end up in our justice system,” he said. “I want to humanize those fathers, sons, mothers and daughters. We should treat one another like family and not judge anyone based on the color of their skin.” 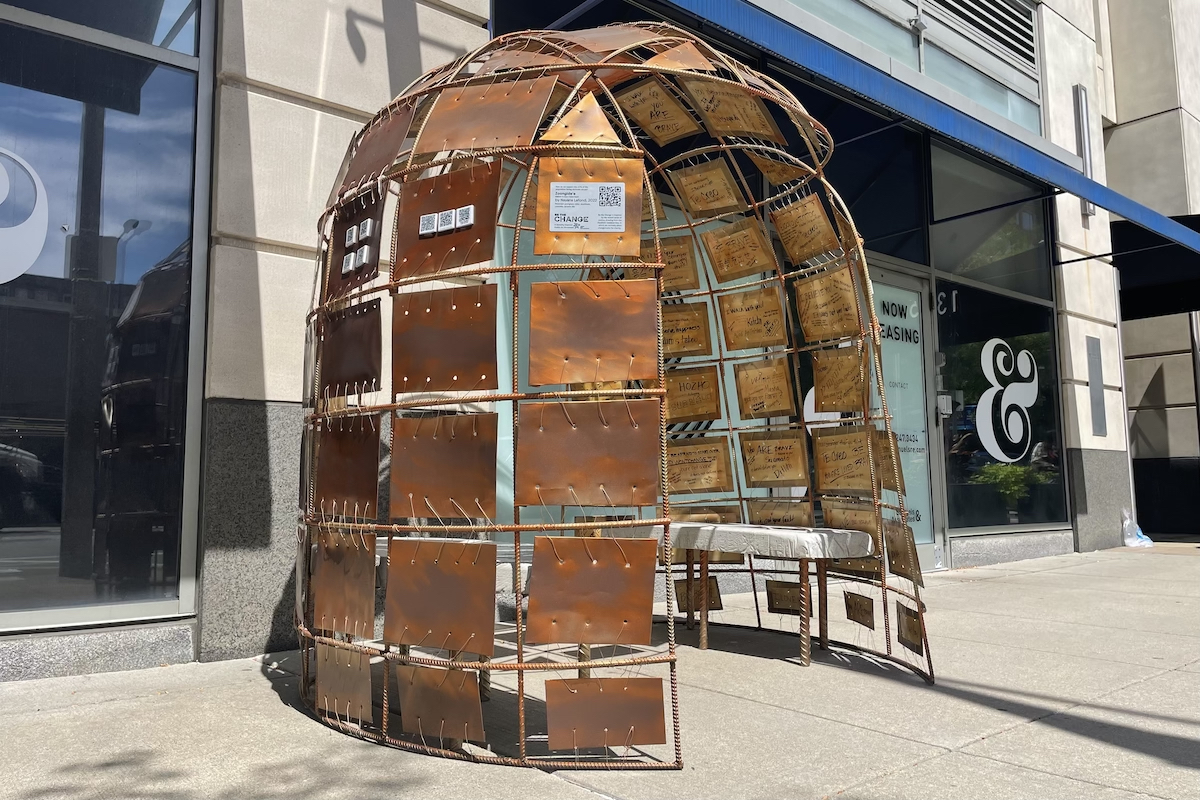 Nayana LaFond calls her sculpture “Zoongide’e,” an indigenous word for “brave.” Her piece is a modern recreation of a wetu (wigwam) built from recycled materials. Seven feet wide and eight feet tall, LaFond blasted the wetu’s solar panels with red handprints to represent being silenced and reaching out for help. She deliberately chose red to honor the indigenous belief that red is the only color spirits can see. “I harkened back to the idea of calling the dead back home and remembering their experience of being silenced,” she said.

LaFond’s piece was an outgrowth of her passion project, “Missing & Murdered Indigenous Women & Girls/People” paintings. Thus far, she has painted 85 portraits of domestic violence victims and given them away to their families. The project has evolved into a nonprofit venture where she exhibits her paintings to raise awareness of domestic violence and promote healing. “I want people to go inside the wetu and consider it a safe space to be heard and think about safety and home,” she explained. The QR codes for her piece provide names of organizations that assist domestic violence victims, along with contact information for attorneys who do pro bono work for victims. 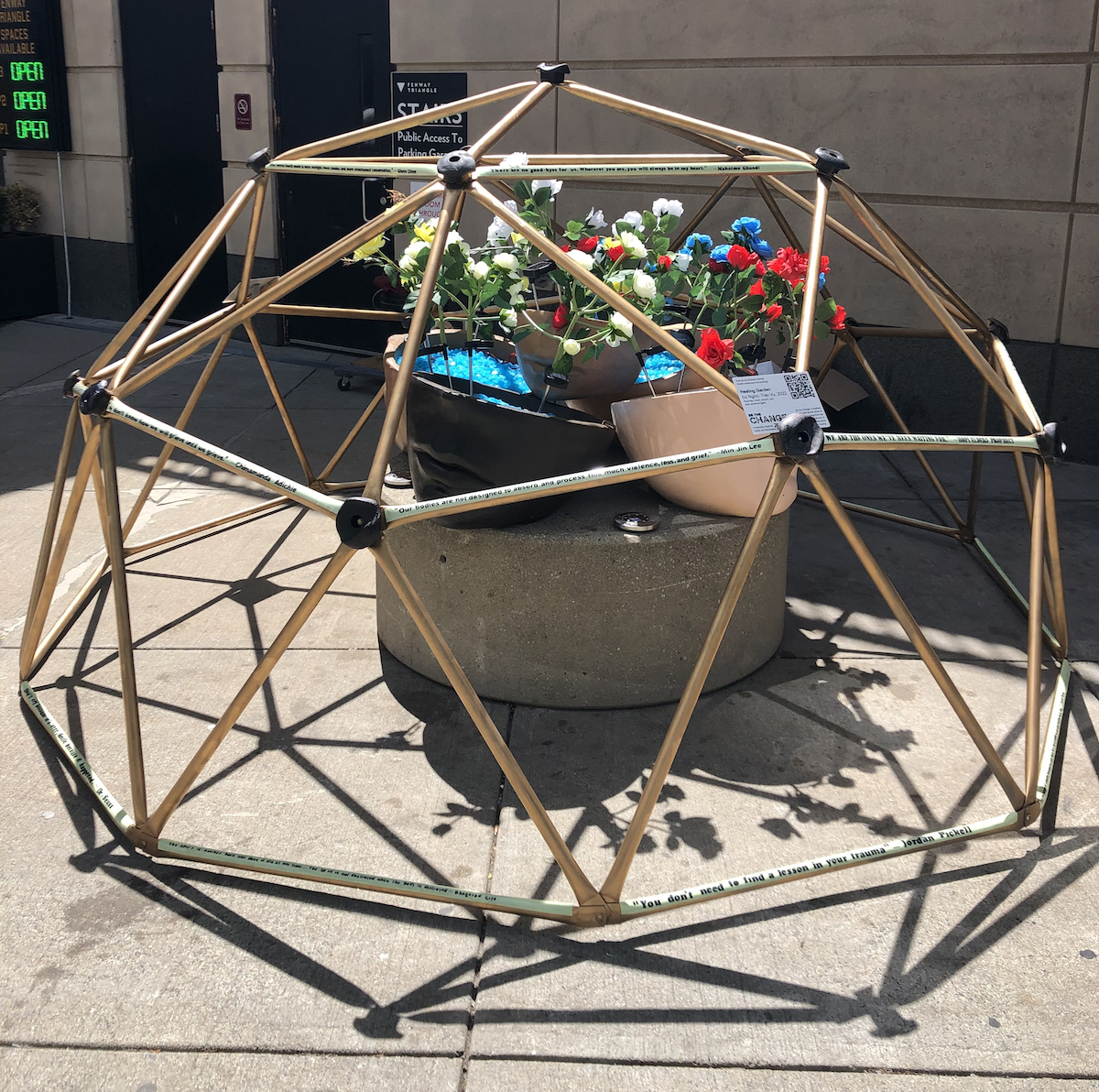 Ngoc-Tran Vu’s “Healing Garden” is another safe space to meditate on mental health, trauma and healing. Vu said she wanted her piece to encourage healing in these stressful times. One in five Americans has mental illness; Vu acknowledged that statistic with her creation of five ceramic heads that show half a face with various skin tones. “I want people to see themselves in those faces, which also correspond to the classic five stages of grief in the colors I have designated,” she said. “I also have dark rocks that glow in the dark and ceramic flowers powered by solar energy to show what has been hidden. It’s an enclosed space with an open dome to give a sense of expansiveness and breath.”

Vu festooned the sculpture’s base with various cultures’ quotes about grief and mental health. (The nearby QR code accesses mental health services in the Boston area.) One quote conveys the wisdom of the Hopi elders, declaring, “We are the ones we have been waiting for.” Vu noted that in her Vietnamese culture, shared grief has a dedicated word—chaibuon. She illustrated the sentiment with a Korean piece of lore that says sharing pain cuts one’s grief in half; sharing joy doubles the joy. Vu also researched intergenerational trauma and interviewed somatic healers in Boston and her native Vietnam who work beyond Western medicine. Those healers, she said, can be invisible in a community. Pre-pandemic, she went on a pilgrimage to Vietnam to confront past traumas of war in her country. “We paid homage to our ancestors and let them be in peace and rest,” she said.

Sam Mendoza Fraiman deployed his fashion design skills to focus on transgender rights in a work he calls “It’s Giving.” The project’s title originated in the Black trans community and then became commonly used by other groups in the LGBTQ community. A cisgender gay man, Mendoza Fraiman approaches his work as a witness to the pain and injustices suffered in the trans community, committing himself to telling stories on the community’s behalf. “We’ve overlooked justice, equality and equity, many fundamental rights that are missing for this community,” he said.

Mendoza Fraiman said he plays with “the cheekiness” of his project, which is three female forms. He draped the sculptures in a textile he designed to include working QR codes within the fabric. The codes bring up various websites helping the trans community, including Boston GLASS, which provides services to LGBTQ youth of color in Greater Boston and Framingham, Keshet, which works for LGBTQ equality in Jewish life, and the Transgender Emergency Fund of Massachusetts, which supports trans individuals who incur expenses during their transitioning. Additionally, Mendoza Fraiman made an actual tzedakah box to display with his sculptures. “The metaphorical becomes real. You can see it and act on it,” he explained.