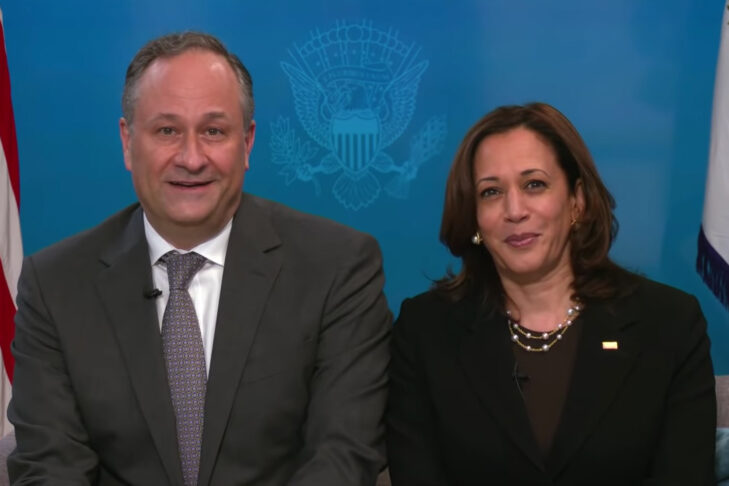 President Joe Biden made an appearance at the White House Passover celebration on Thursday, telling the nearly 10,000 virtual attendees one way in which this year’s seder is different from all others: “Not only ‘Next year in Jerusalem,’ but ‘Next year in person!’”

“As we seek to rebuild from a time of struggle and loss, we need the inspiration of the story of Passover now,” Biden said. “There are far, far too many empty chairs at our seder.”

The virtual event, held over Zoom and available on YouTube, was hosted by Second Gentleman Douglas Emhoff, the first Jewish spouse of a United States president or vice president.

Rabbi Sharon Brous, the senior rabbi at IKAR, a non-denominational synagogue in Los Angeles, led the seder service. The event marked a return to a tradition of presidential Passover celebrations started by President Barack Obama in 2008, which was discontinued in the Trump White House.

“This is a moment of many firsts,” Emhoff said. “This is the second Passover in a row that we’re celebrating virtually, and hopefully it’s the last.”

The first-ever second gentleman retold his own fond memories of childhood seders at his grandmother’s house in Brooklyn, with “plastic coverings on the sofa,” a “waft of brisket from the kitchen” and, most importantly, gefilte fish, the Passover staple Emhoff said he “inexplicably” loves to this day.

Throughout the hour-long livestream, Brous walked viewers through the core elements of the seder, introducing other speakers and explaining the meaning behind the stories and customs of Passover.

“This story reminds us that we have the muscle memories for survival built into our very beings,” Brous said. She added that Passover is a “political story” that teaches about “a world in which we recognize that all of our liberation is tied up in one another,” reminding us each year, quoting Frederick Douglass, that “power concedes nothing without a demand.”

Children from the Milton Gottesman Jewish Day School, based in Washingon, D.C., joined live to sing the Four Questions and “Dayenu,” while Jewish members of Congress, including Sen. Jacky Rosen, Rep. Debbie Wasserman Schultz, Rep. Ted Deutch and Rep. Lois Frankel, were welcomed on the Zoom.

Jewish members of the Biden administration joined throughout the event to share their thoughts on the story of Passover and demonstrate a particular element of a traditional seder. Deputy national security advisor Anne Neuberger discussed her own Holocaust survivor grandparents’ “gratitude for freedom,” while Herbie Ziskend, the current deputy director of communications for Vice President Kamala Harris and a former Obama aide, told the story of his first seder with then-senator Obama.

After a long day of campaigning in Harrisburg, Penn., Obama joined his Jewish staffers for a makeshift seder in the basement of their hotel, Ziskend recalled. Upon hearing “Next year in Jerusalem” at the seder’s close, Obama jokingly added, “Next year in the White House.” The next year, the president followed through, and Ziskend celebrated the holiday in the People’s House.

Toward the end of the celebration, the president and first lady joined the video with a message of “Chag sameach,” and Harris closed out the event alongside her husband.

“The Passover story is powerful. It reminds us of the resilience of the human spirit in the face of injustice,” the vice president said. “We all deserve freedom. It is our duty to fight for those who are not yet free.”

Marie-Rose Sheinerman is a news intern at The Forward.

Reprinted with permission from The Forward.
Never miss the best stories and events! Get JewishBoston This Week.