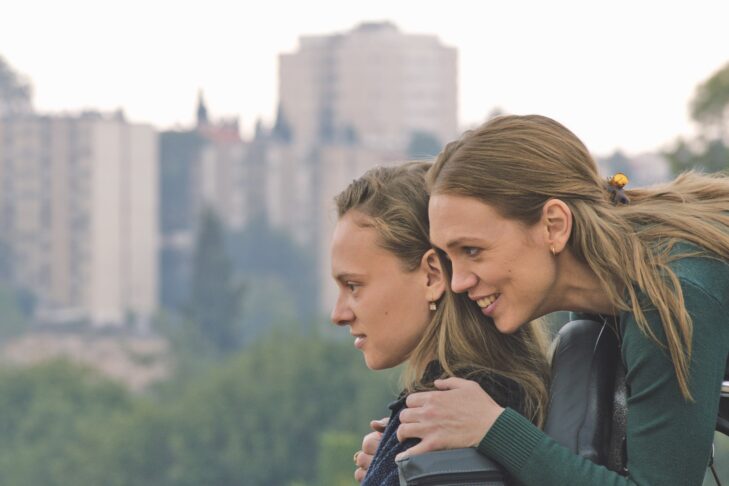 Here are picks from the first week of the Boston Jewish Film Festival. 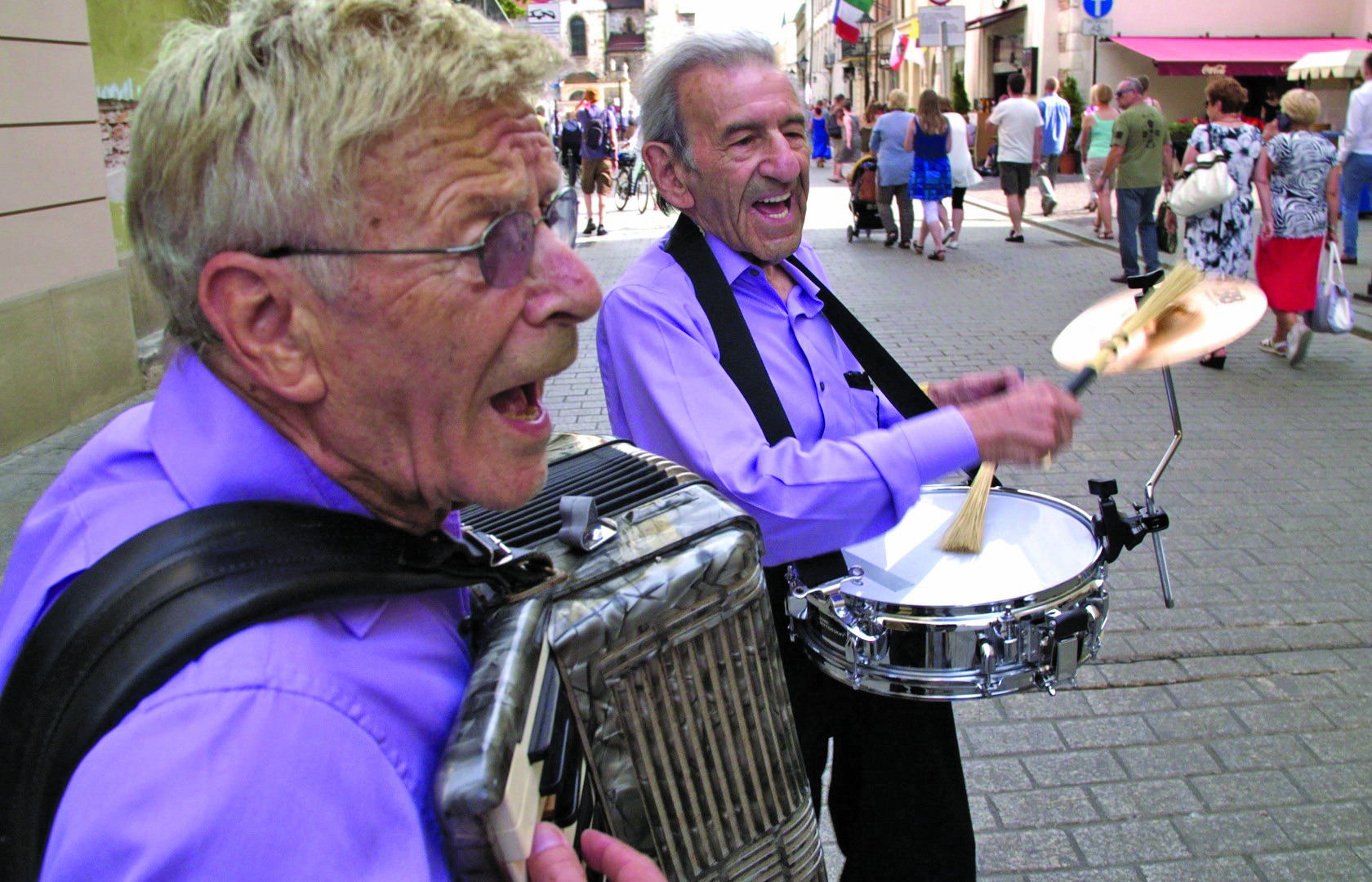 This year’s opening night film, “Saul & Ruby’s Holocaust Survivor Band,” is a poignant documentary about two Holocaust survivors who form the Holocaust Survivor’s Band. Saul Dreier is a spry nonagenarian originally from Krakow. The sole survivor among his more than 30 relatives, Dreier was imprisoned in the Plaszów concentration camp, where the notorious commandant Ammon Goeth frequently beat him. In 1943, Dreier moved on and worked in Oskar Schindler’s factory before he was liberated at Mauthausen.

Dreier eventually landed in New Jersey, where he married Clara and worked in construction. He retired to Coconut Creek, Florida, where we first meet the couple in their dining room. In that first scene, Dreier recalls how he told Clara about his idea to form a band in which he would play drums. “She told me, ‘You’re crazy,’” he says. “Then I went to my rabbi—he told me also I’m crazy. So, my instinct told me that just on the contrary, because they told me I’m crazy, I’m gonna do it.”

Ruby (Reuven) Sosnowicz escaped from the Warsaw Ghetto, making his way to the Polish/Russian border with his parents and eight siblings. Sosnowicz was separated from his family at the border—a Polish farmer hid him for the duration of the war. After Sosnowicz reunited with them, he immigrated to Brooklyn, where he and his wife, Gina, owned a hair salon. Music, however, was always a passion, and Sosnowicz played the accordion and keyboard professionally.

These two indomitable spirits form their band with the goal of playing in Auschwitz and Warsaw to honor the memory of the 6 million Jews who died in the Holocaust. Sosnowicz’s daughter, Chana, is a singer in the band, and is, in effect, the band’s stage manager and the men’s minder. The band tours synagogues, community centers and mall food courts in Florida, Ohio and Canada to raise funds for their trip to Poland. They hit the big time when they perform at the Kennedy Center’s Millennium Stage in Washington, D.C.

This odd couple and Chana find their way to Warsaw and Krakow. The men revisit their childhood homes and other personal landmarks, which bring their histories to life. Reporters interview them on Polish television and a popular Polish rock star warmly receives them. They attract large, appreciative crowds to their outdoor concerts. Music has not only sustained these men but continuously gives their lives meaning.

“In Your Eyes, I See My Country” 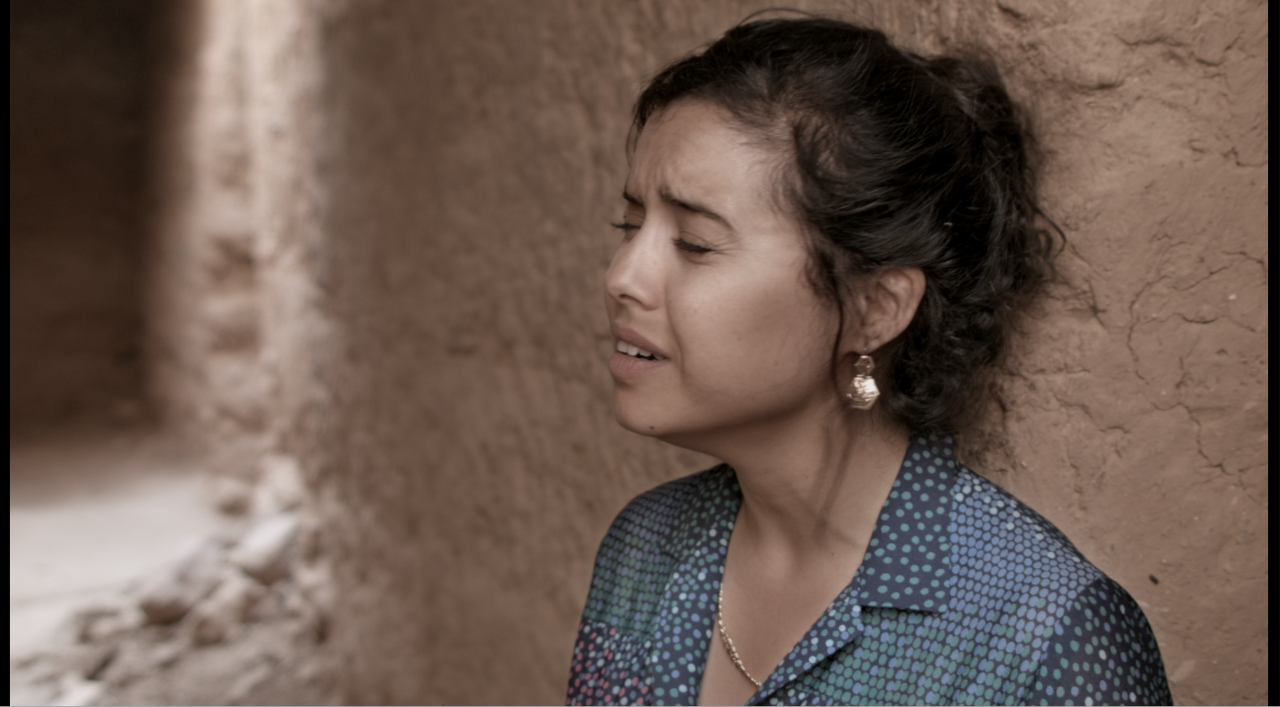 Neta Elkayam in “In Your Eyes, I See My Country” (Promotional still)

This documentary, director Kamal Hachkar’s sophomore effort, focuses on fellow Moroccans who feel as if they are displaced Jews in Israel. The film trains its camera on the magnificent singer Neta Elkayam and her musician husband, Amit Hai Cohen, who live in Jerusalem. Hachkar then follows the young couple in Morocco as they combine a heritage tour with a musical exploration of their ancestral land.

This lovely film is also an affecting consideration of identity. Elkayam and Hai Cohen feel caught between their Israeli and Moroccan cultures. Their music, haunting as they sing its minor tonalities, evokes a deep-seated longing to unearth their family’s history. In Morocco, they also look for their ancestors in graveyards and seek to find their spirits in the abandoned homes where they lived. Hai Cohen even locates his grandfather’s house in a village in the middle of the desert.

But it is Elkayam who carries this documentary. Her voice is gorgeous and her passion for her Moroccan heritage comes through in every note she sings. 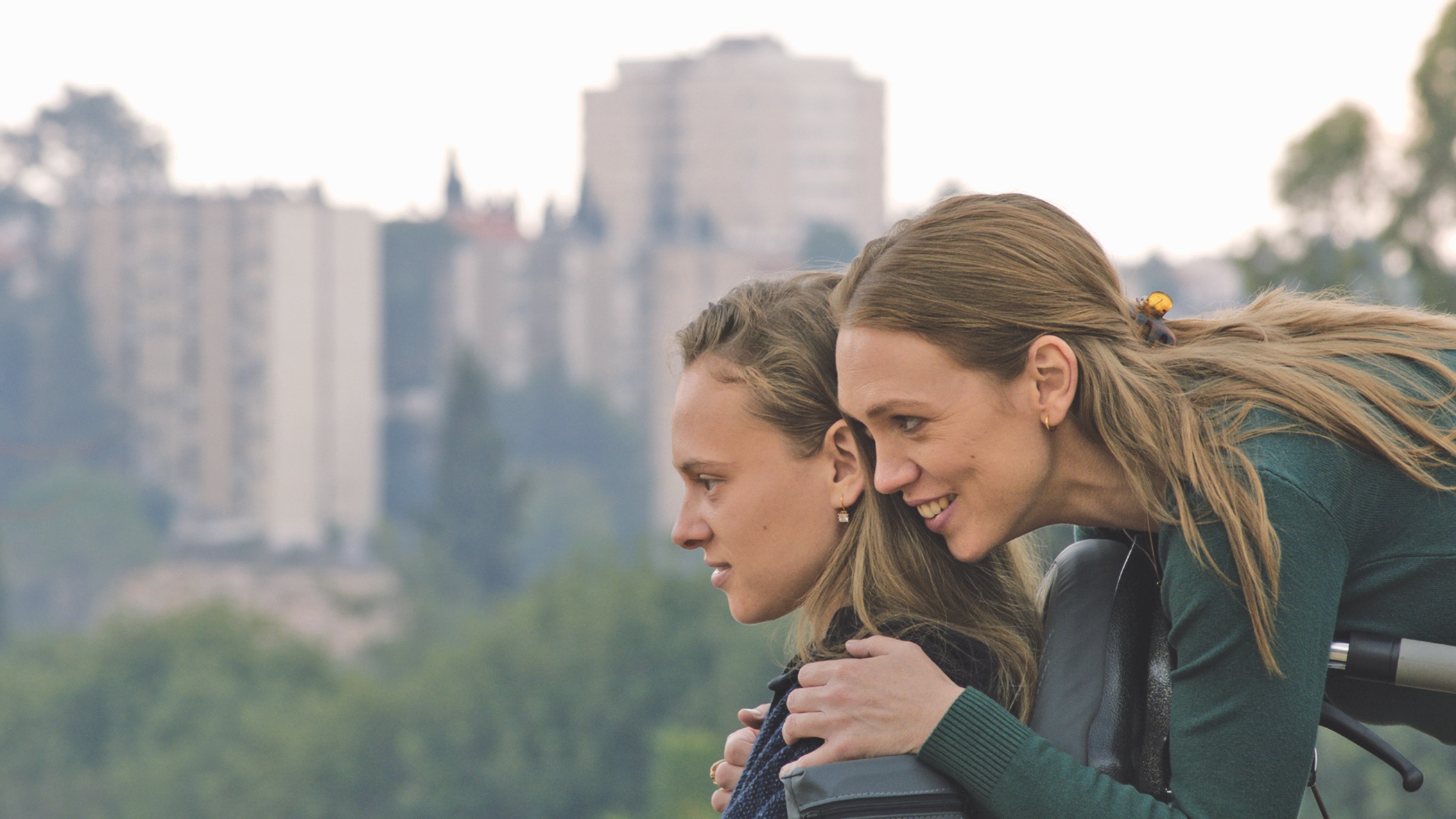 Teen death can be a film cliché; “The Fault in Our Stars” and “Now Is Good” come to mind as examples. But “Asia” is a resonant drama unfolding between a young mother and her teenage daughter. Shira Haas, the talented Israeli actress from “Shtisel” and the star of “Unorthodox,” carries the movie as 17-year-old Vika.

Vika emigrated from Russia to Israel as a toddler with her mother, the eponymous Asia. Their relationship is tense and chilly. Vika is rebellious, drinking and smoking pot with her skater-punk friends. But after partying too hard one afternoon, she lands in the hospital where Asia works as a nurse. The episode reveals the harshness of Vika’s grave degenerative motor disease.

Asia works long hours and struggles to parent her willful, dying child. Vika’s antics are as confusing to Asia as her own late-night drinking alone in bars and her frequent assignations in a married colleague’s car. As Vika’s condition deteriorates, Haas brilliantly transforms her body until it is ravaged, and all that is left of her are wide, expressive eyes.

As her daughter is dying, Asia is determined to give Vika experiences she imagines Vika wants. Asia sets up a tryst with the teen’s nursing aide that goes terribly awry. Vika refuses to be the object of anyone’s pity and forges ahead to live her vision of adulthood in the time she has.

Vika’s dying matures her, and it opens Asia up to a maternal love that she had long suppressed. In the film’s upsetting yet moving last scene, this mother and daughter arrive at a profound understanding of family. 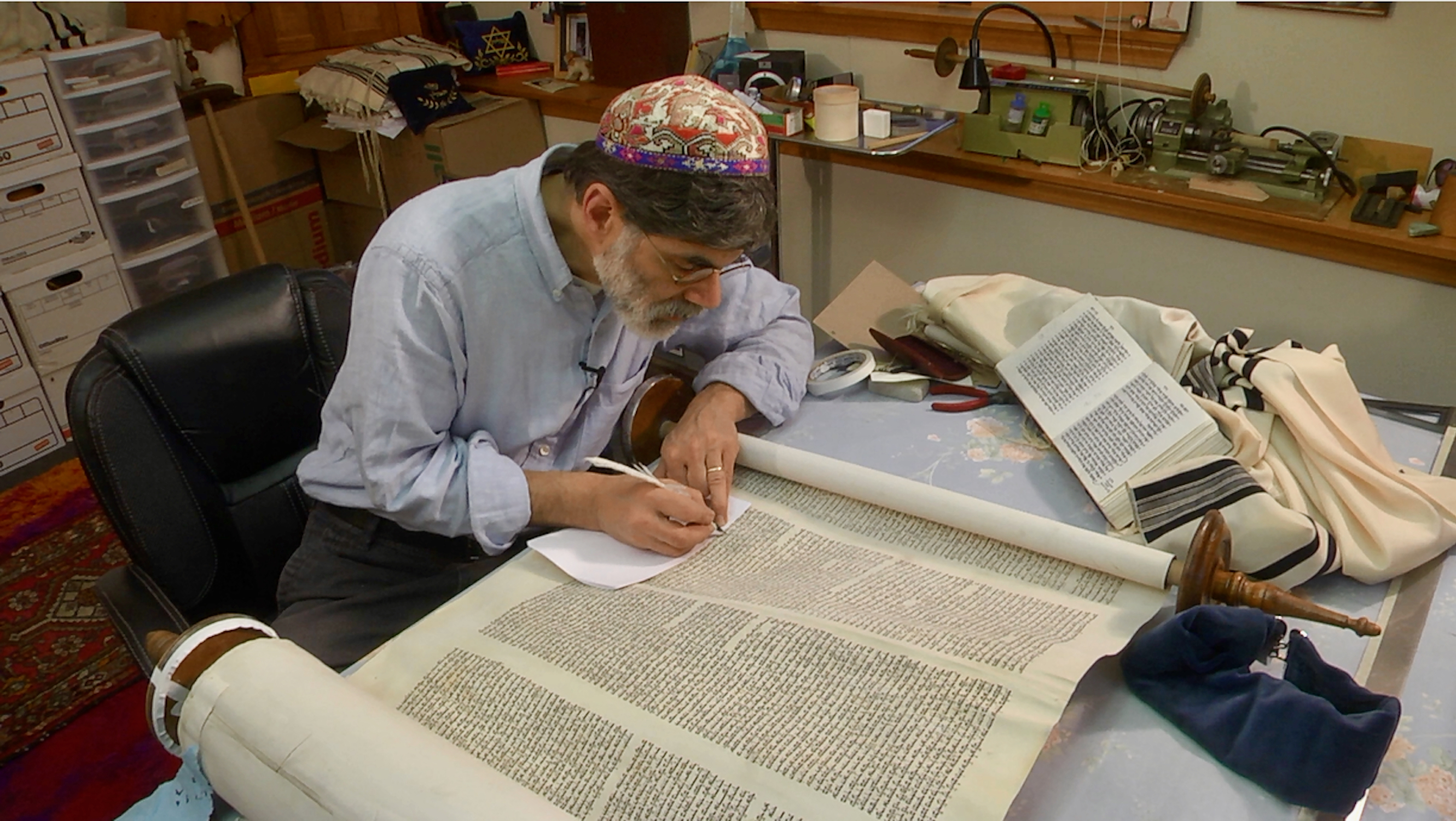 Rabbi Kevin Hale, a sofer, or scribe, is the subject of this fascinating, intimate short. Hale, who is based in Western Massachusetts, writes, repairs and restores Torah scrolls. He also helps fellow Jews to fulfill the 613th commandment to write, or at least participate, in actually writing a Torah.

Along the way, audiences learn fascinating tidbits about Torah scribing and what qualifies someone to take on the sacred job of writing out its 304,805 letters. For example, before a sofer writes one word of the Torah, they must use a quill set aside for writing Amalek’s name—the infamous enemy of the early Israelites—and then cross out the name. There are also special quills with a supply of ink set aside to write God’s name on the parchment. An animal should not be killed to write the Torah. Nor should the needles used to sew the Torah’s panels together be made of base metals that are customarily used to make weapons of war.

Hale notes that each Torah he scribes is unique because it reflects the time and personalities that first wrote out the more than 300,000 letters. He also points out that a professional scribe must be well-versed in the Torah. The act of writing out the Torah is always a collaboration between the heart and the mind, and a scribe should write out a Torah only for the sake of holiness. To that end, among the holiest of acts for a sofer is to help Jews fill in letters to fulfill the 613th commandment. 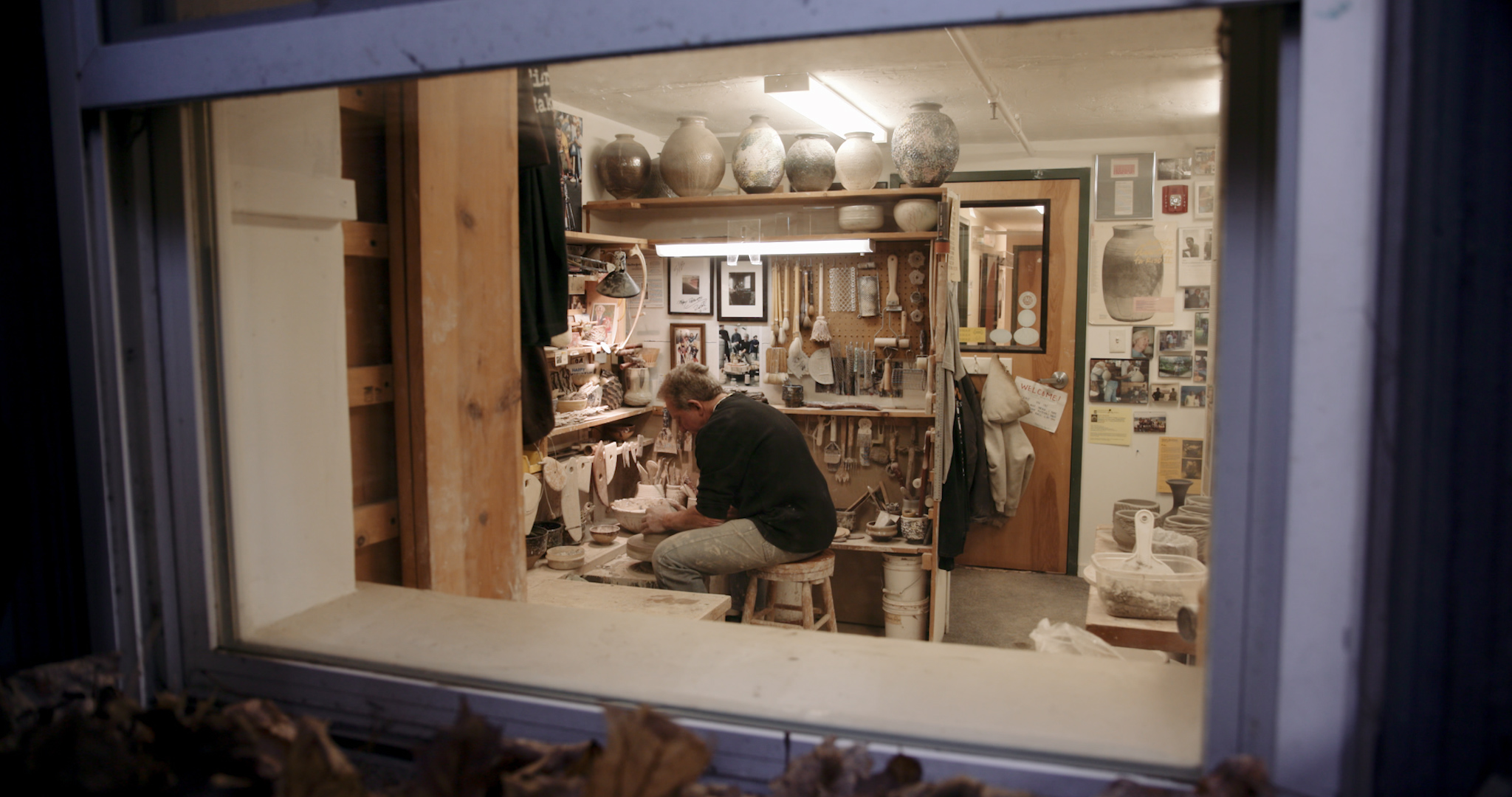 Steven Branfman and his late son, Jared, were both ceramicists. Jared’s talent was evident in the beautiful chawans, or Japanese tea bowls, that he made. When Jared died of cancer in 2005 at 23, Branfman recited the Mourner’s Kaddish for his son every day for a year as Jewish tradition proscribed. But he also expanded his Kaddish practice by making a chawan each day he said the prayer of mourning.

During his year of mourning, Branfman filled shelf after shelf in his Needham studio with chawans he had made in his son’s memory. Even posthumously, Jared shared his art with his father. The documentary brilliantly captures the contemplative, meditative quality of reciting the Kaddish and then sitting at his potter’s wheel to make a chawan.

Branfman shares that making the chawans enabled him to mark time and to capture the range of emotions he experienced as he threw them on his wheel. “It was a year of reconciliation with myself and with what happened,” he says. “The chawans gave me purpose.”

The short ends with an exhibition of the chawans, representing an aspect of Branfman’s mourning. Visitors to the exhibit witness Branfman’s grief, where his artistic and spiritual practices come together. “Vessels are formed from the bottom up and the inside out,” he says. “It’s the interior, volume and presence and existence that express themselves on the outside of your vessel. No matter where I was, I made one [chawan] a day. … I wanted to move on with this experience, not through it, and incorporate it into my life.”