Close
Never miss a great event again!
Get the best Jewish events delivered to your inbox every Thursday with JewishBoston This Week.
By signing up, you agree to our Terms of Use and Privacy Policy.
High Holiday Recipes
View all 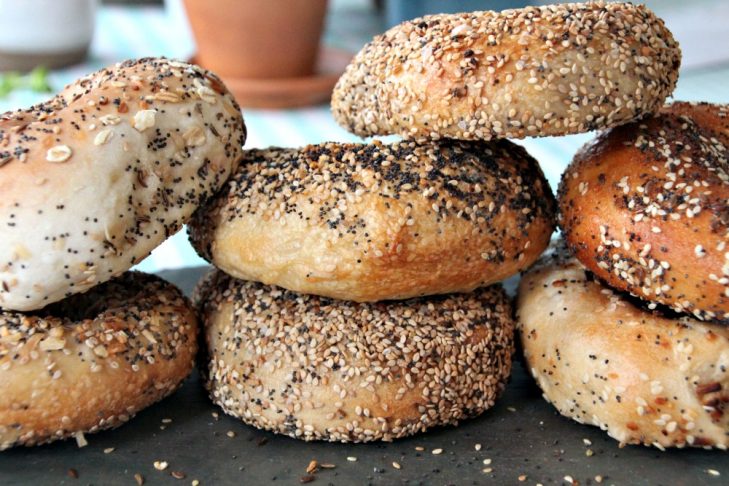 It’s no secret: Boston hasn’t always been respected as a bagel town. There was a time when asking for the best bagel in Boston would elicit a scoff and a claim that you should take the trip to New York, or New Jersey, or even Montreal, before deigning to settle for a bagel you get in Boston. But things have changed. Boston now has bagels that stack up with the best from around the country. (Yes, I even got some native New Yorkers to admit this.)

When I started making a list of Boston bagelries to visit—places I’ve been to or heard about, plus places you recommended—the list was long. Here’s the first in what may be a multi-installment series. It’s full of new and old establishments, all of which combine to account for Boston’s bagel renaissance. 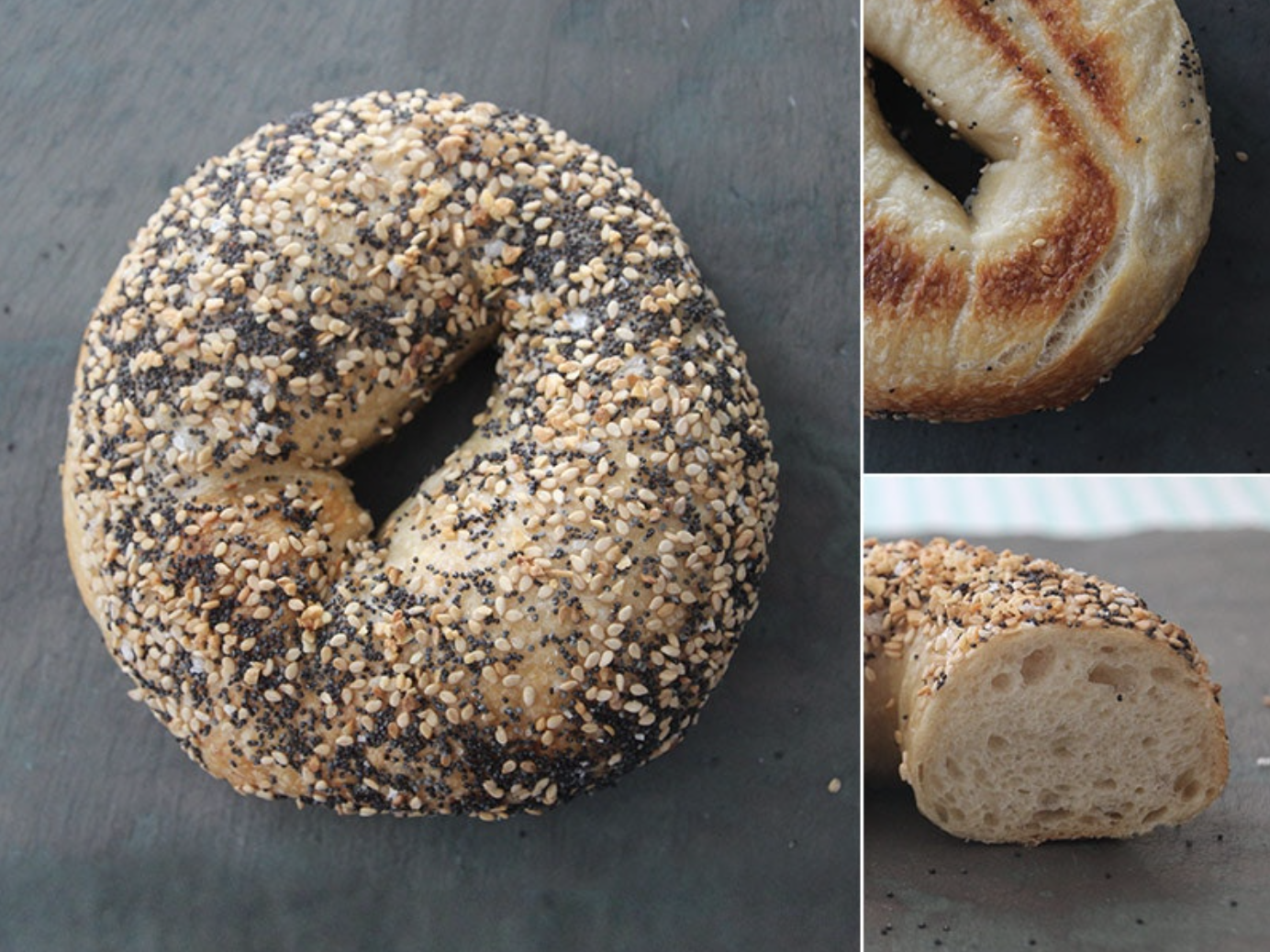 Lovers of chewy bagels are probably familiar with the Bagelsaurus story. Starting in 2013, the bagels were a popular weekly pop-up at Brookline Village sandwich shop Cutty’s, where baker Mary Ting Hyatt worked. She eventually opened her own always-bustling brick-and-mortar near Cambridge’s Porter Square, which often sells out early. Plan accordingly, because these chewy bagels are worth the wait. The everything bagel—which I recommend ordering with the honey-rosemary cream cheese—has full coverage on top, with lots of toasted sesame seeds and a good hit of flaky salt. And like all Bagelsaurus bagels, it’s light, airy and slightly sour thanks to the extra-long fermentation and sourdough starter. 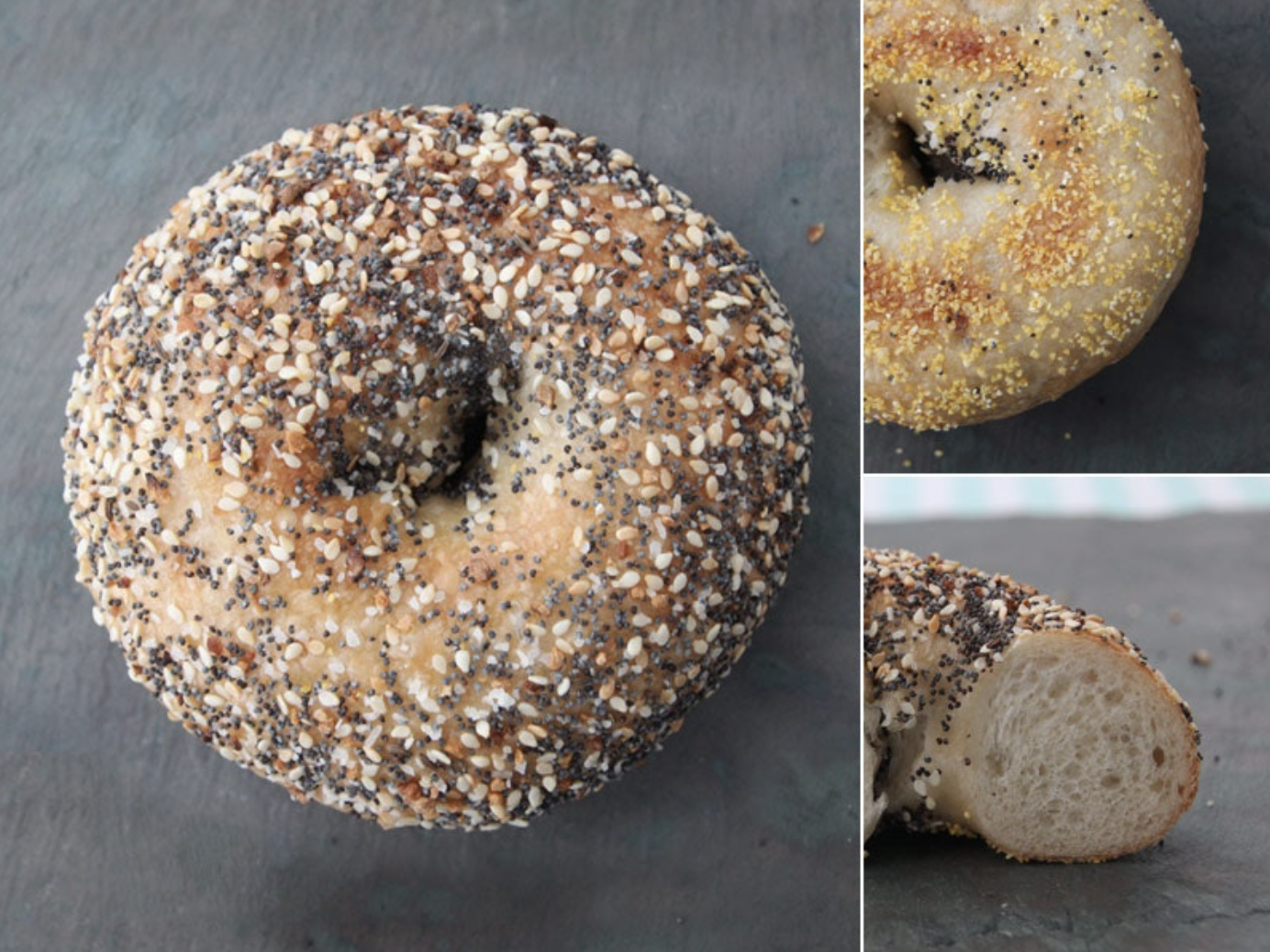 Exodus, like Bagelsaurus, has acquired devoted followers by vending at local markets and having pop-ups at restaurants and stores around Boston. (Its exact location is usually marked by a long line of people.) And its popularity is well-deserved. The bagels are made from a sourdough starter and are cold-fermented. They bake up chewy, crackly and fluffy inside—but not insubstantial or bland. The everything bagel is completely covered with toppings; it’s heavy on the garlic and onion—as an everything bagel should be—and has a good hit of salt. The bottom of the bagel comes flecked with cornmeal, which adds an appealing crunch. Rumor has it that Exodus will soon have its own retail shop in Roslindale, which will serve to boost Boston’s bagel reputation even more. 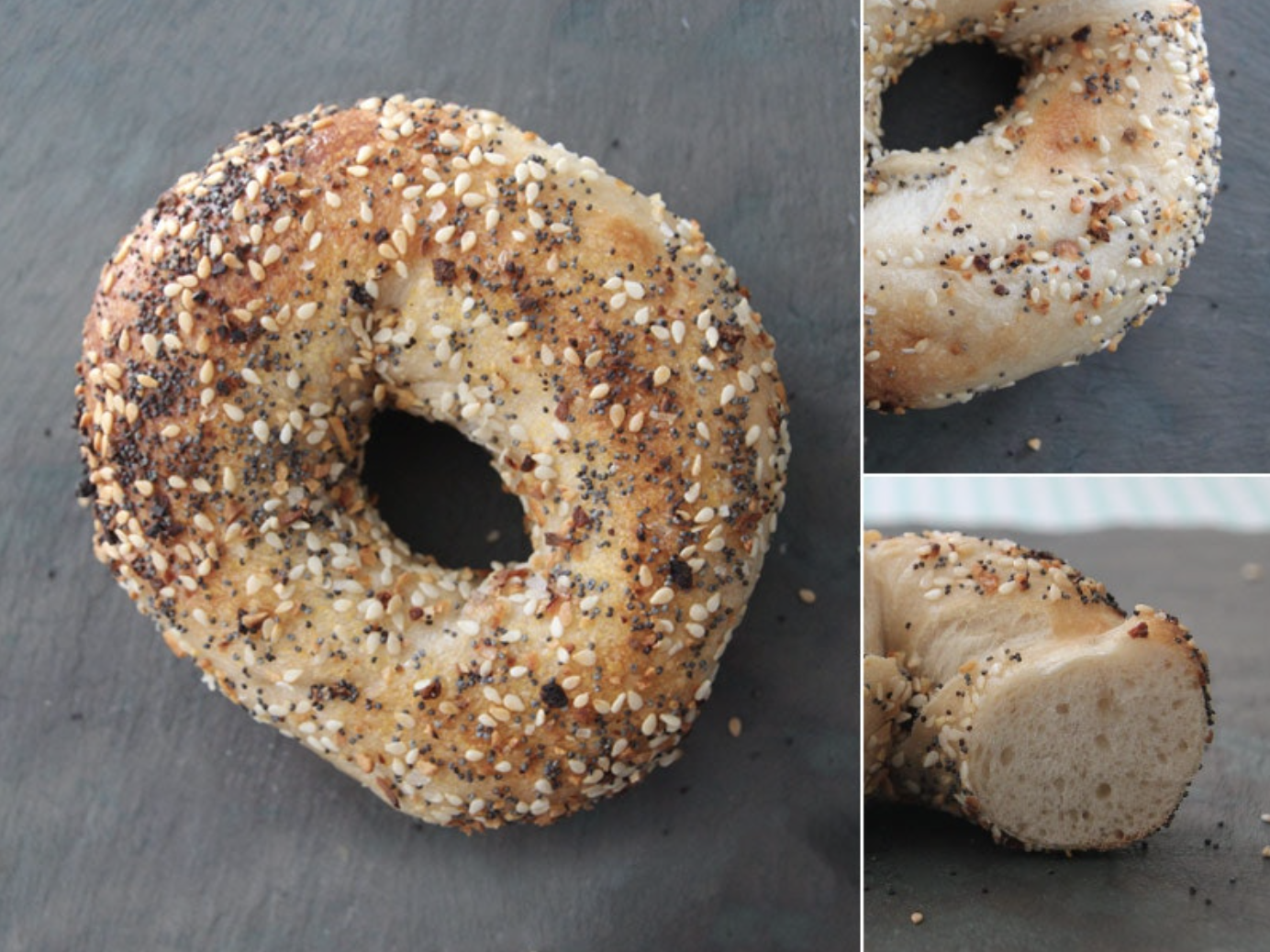 Better Bagels earns its name. These New York-style bagels are currently available in coffee shops and restaurants around town, and will soon have their own permanent home in the Seaport. They’ve got the characteristic shiny crust and good chew, as well as good coverage when it comes to toppings. I also like the bagel’s irregular appearance—proof that it’s been formed by hand.

Mamaleh’s came highly recommended to me by some friends who swear by the bagels in their New Jersey hometowns. That’s quite a comment on Mamaleh’s ability to fulfill its mission to deliver a deli experience from days of yore. On the bagel front, they keep things simple by just offering the standards: plain, sesame, pumpernickel and everything. The everything bagels are the darkest of the lot, with a deep flavor that’s hard to describe except to say it’s appealing, and maybe toasty (but not toasted). They have an impossibly crackly crust and chewy crumb, and ample toppings on top and bottom, including lots of seeds.

Rosenfeld’s was started 40 years ago by Mark Rosenfeld, who learned the art of bagel-making in a bakery in New Jersey. For many, that fact alone earns these firm, springy bagels points. And while the everything bagel’s toppings may appear stingy at first, flip the bagel over for a healthy dose of dried garlic flecks, salt and seeds. 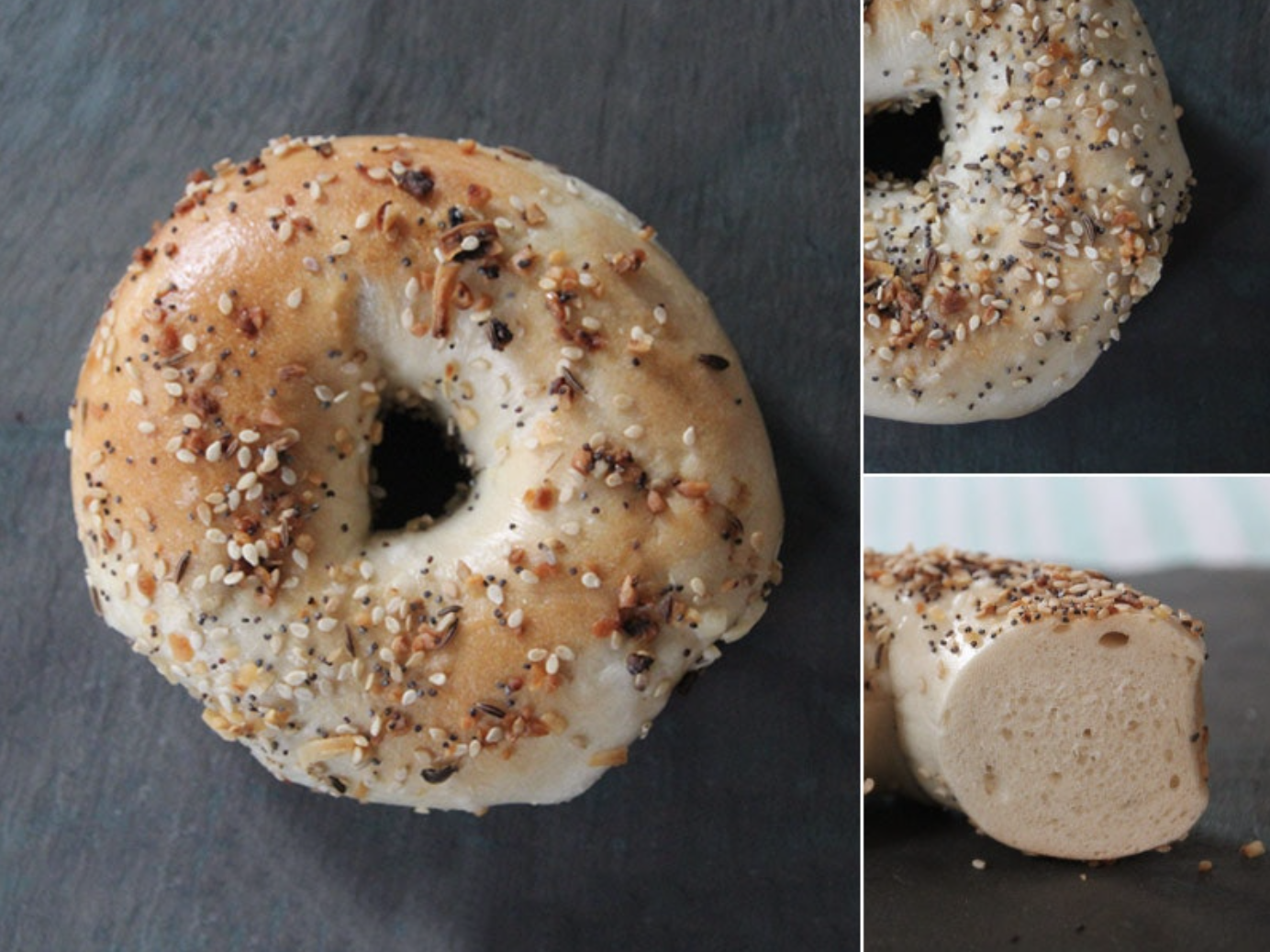 Katz Bagel Bakery has been family-owned and operated since 1938, and it’s still got lots of that old-school charm. For example, when I tried to pay for my order over the phone, the man I was speaking with said he didn’t know how to work the credit card machine so I’d have to just come in. I’m glad I did. These bagels are soft and fresh, with a decent smattering of toppings. In addition to the tasty bagels, the no-frills bakery comes with two other claims to fame: creating the pizza bagel and introducing bagels to China. Read about both on their website. 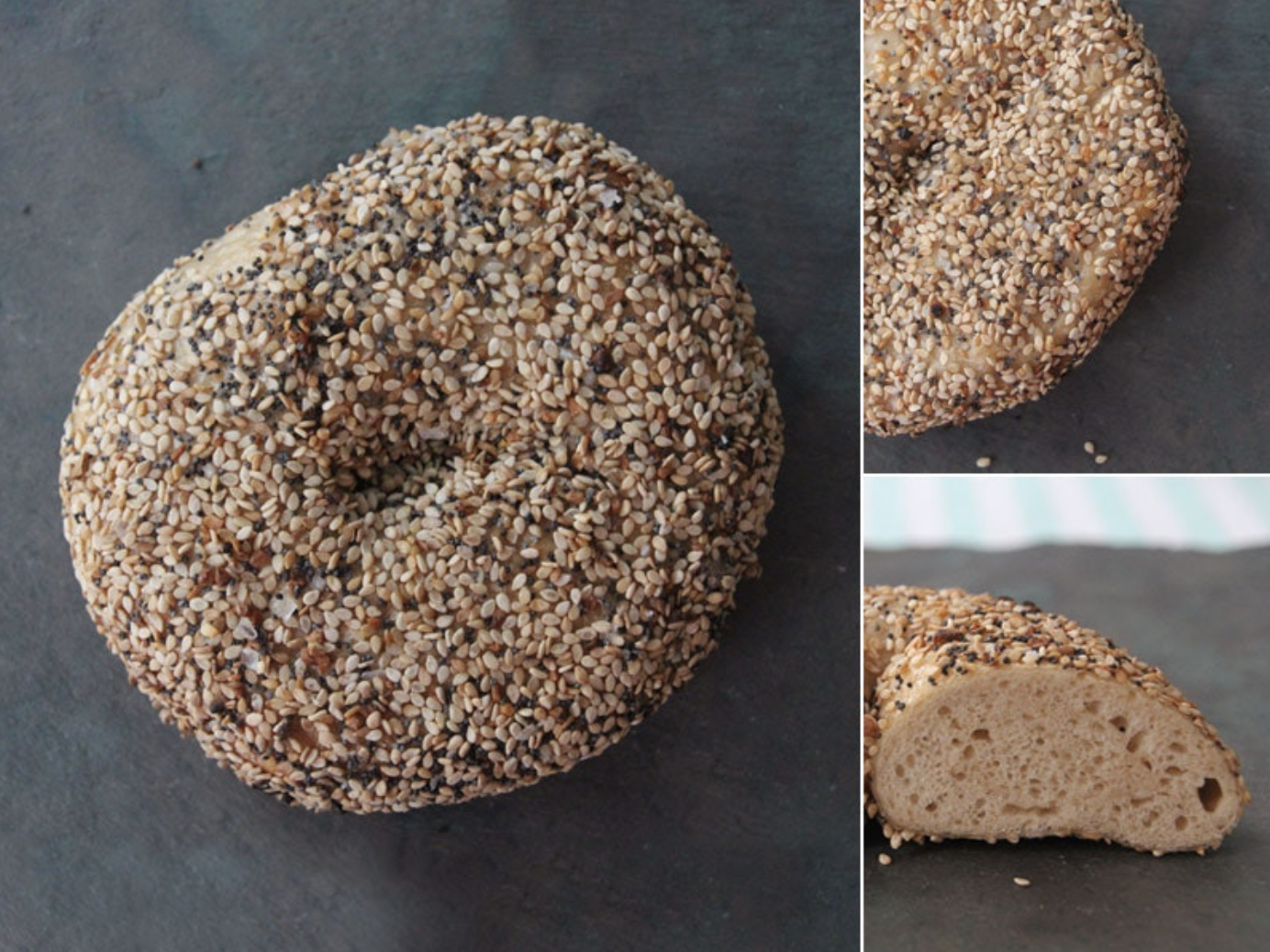 Levend Bagelry is reason enough to go check out the Boston Public Market. (Here are five other reasons if you still need convincing.) The bagels are all made with organic flour and are naturally leavened using a five-year-old sourdough starter, which they’ve named Hansel. (If having a sourdough starter is like having a pet, I suppose you should name it like one, too.) You can barely see the bagel underneath all the toppings on the everything bagel, which includes a hearty helping of seeds and big flakes of sea salt. The bagel itself has great chew and a toasted, complex flavor, and it should be served with a shmear of cream cheese, made for the bakery by Narragansett Creamery. 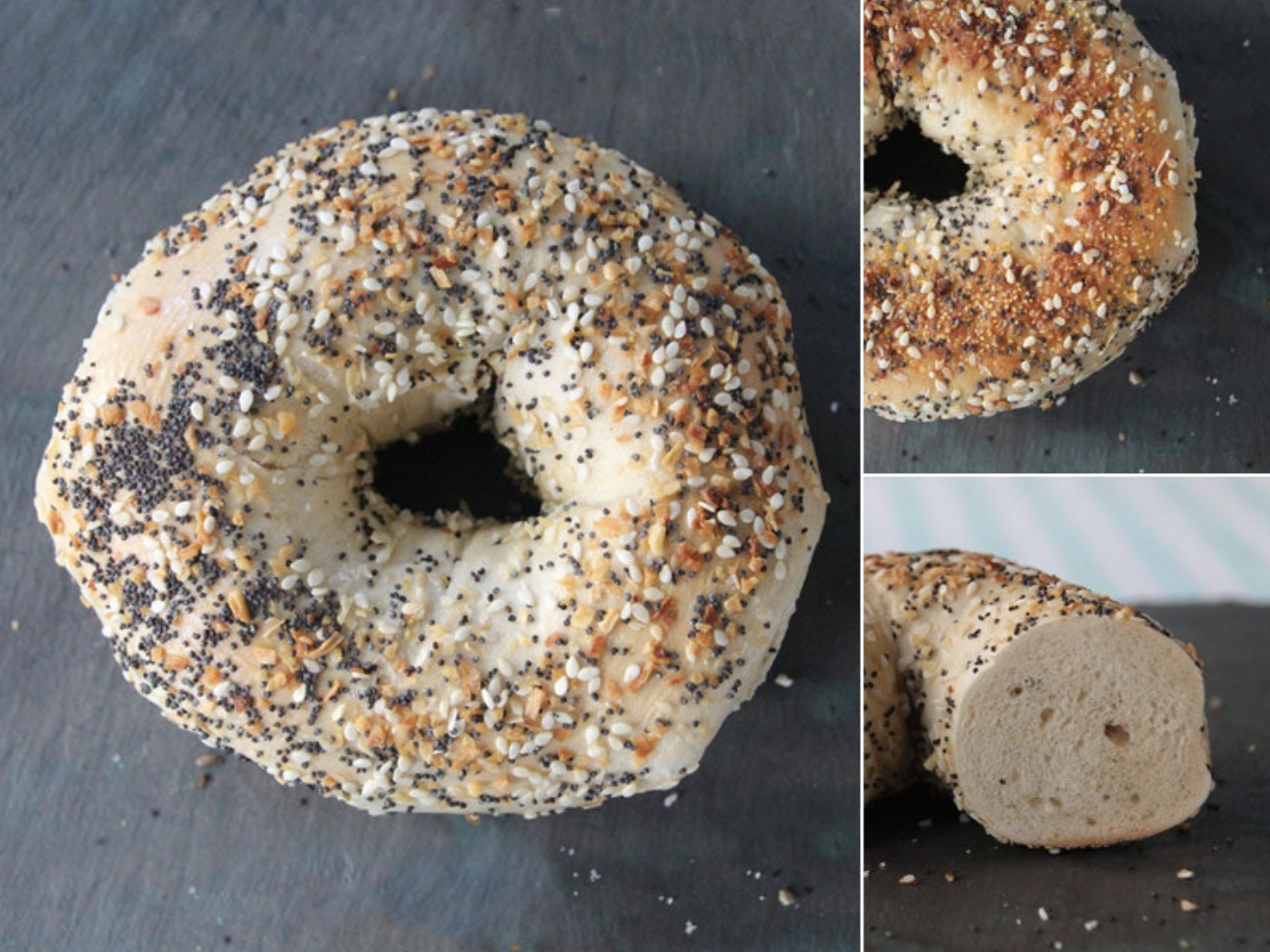 Family-owned and operated Finagle A Bagel has been churning out bagels in Boston since 1998. (For more on its history and current operation, check out this JewishBoston article.) Its bagels are available in supermarkets around the country and in retail shops in Boston, including the newest location: a café with kosher options that doubles as a test kitchen and is located adjacent to the Newton headquarters. When you have several locations, consistency is key, and the everything bagel is consistently fresh-tasting, with an even coat of toppings on the top and bottom. 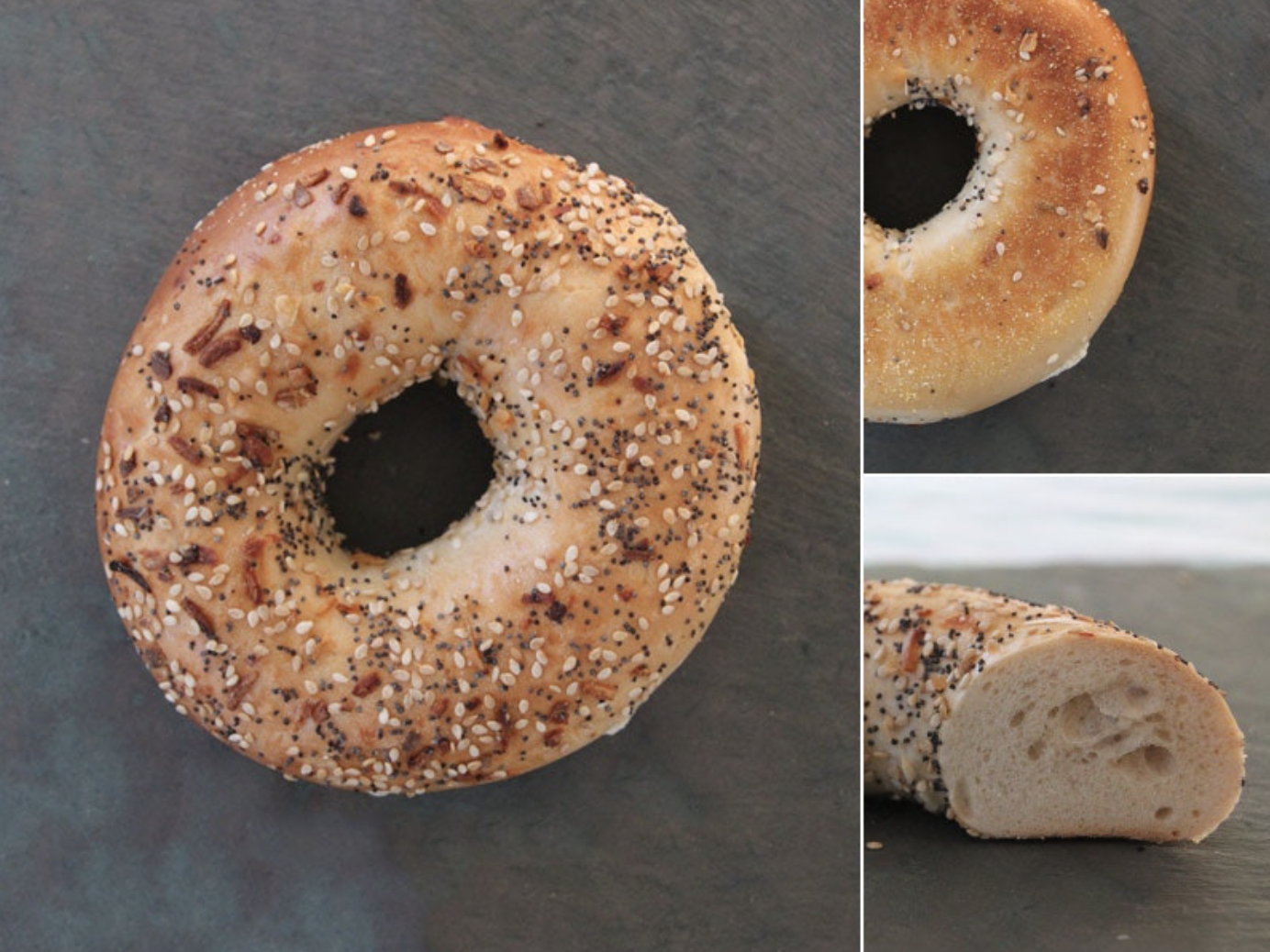 Waltham-based OMG! Bagels has been popping up around Boston since its debut in 2013, and its bagels are now carried in a long list of restaurants, hotels, coffee shops and grocery stores. Touted as New York-style, these bagels are a bit dense and less chewy but still very good. They have a tight crumb and evenly spaced, well-covered toppings on the tops of the bagels.

Open since 1978, Kupel’s is one of Boston’s old, kosher guards when it comes to bagels. The crust on this bagel is thinner than others, with a soft, fluffy interior and tight crumb. The everything bagel has a prominent caraway flavor and, in a nontraditional twist, what appears to be oats. The top is evenly browned and the bottom has good toppings coverage as well. I recommend pairing the bagel with one of the many cream cheese offerings, which include several light versions and options made with tofu.