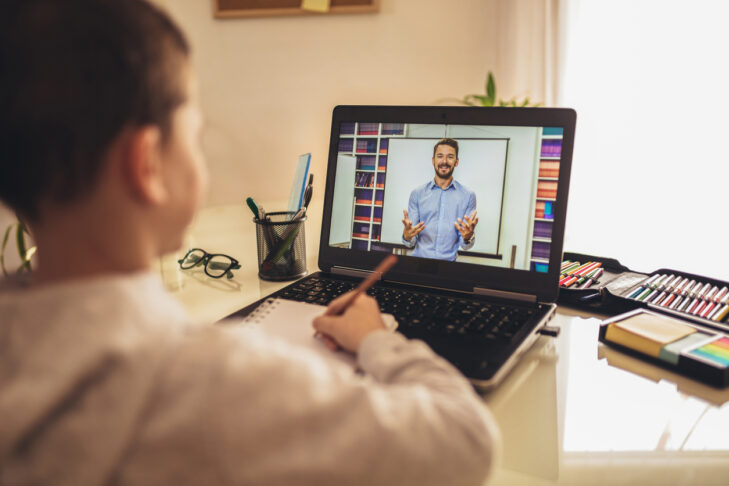 Remember when life was simple and your biggest worry was getting out of work in time to shuffle your kid from school to soccer practice? Sigh. COVID-19 forced schools to pivot almost overnight, switching to distance learning and trying to recreate a classroom experience in the virtual world. Parents are now becoming surrogate tutors; kids miss their friends; teachers miss their classes.

Is there a silver lining? Well, maybe. I talked to parents and educators at Jewish schools throughout the area to see what’s made the situation tolerable…and even successful. Here’s how they pulled it off—and how they plan to make things even better next year, whatever it may bring.

Dani Carrus is a first- and second-grade general studies teacher at Maimonides School in Brookline. Here, kids were learning either asynchronously or synchronously from 8:30 a.m. until 3 p.m., which simulated a real school day but required real buy-in from parents.

“We had a lot of systems in place in terms of parent communication. Parents are a vital part of a student’s education, and we were able to continue that,” Carrus says, through parent-teacher conferences, a weekly newsletter, a daily schedule with clear expectations and surveys for parents wherein they could sound off about their needs.

Depending on feedback, “We’d add an extra one-to-one session with their child or a small group session; we’d adjust assignments based on what they needed,” she says. This was easier to pull off thanks to smallish classes (about 14 kids).

“What surprised me was how they were able to still demonstrate warmth and connection with the kids and caring even over Zoom,” says Sheryl Fox Adler, a Maimonides parent with a first- and fourth-grader.

Tim Morris is a seventh– and eighth-grade science teacher at Solomon Schechter Day School in Newton. He had to pivot fast when school went remote in March, especially because his eighth graders suddenly couldn’t fly to Israel for a long-planned trip. He asked them what they wanted to learn instead. The answer? The science of cooking. So Morris gamely turned his kitchen into a Food Network-style lab.

“I spent almost three weeks doing science classes out of my kitchen, with me showing them chemical equations and talking about how we use these to incorporate air into cakes and meringue,” he says.

The creativity extends to younger grades, too, says Shirah Rosin, a Solomon parent of a kindergartner.

“Doing kindergarten on Zoom is very challenging. We gave our teachers feedback that there was Zoom fatigue among the younger kids, and so our teacher, within the first week, started doing small groups—with stories, rhyming words and play-based things like a puppet show. I really saw how differently my daughter responded,” Rosin says.

And Benjy Hain, dean of students at Maimonides, used the remote-learning opportunity to bring in guest speakers whom he wouldn’t have even considered before.

“The world opened up to us. We had a Holocaust speaker from Rome, a hedge fund manager from New York and a director-screenwriter from his home in New Mexico where he was working on a script,” he says.

Sharon Goldstein, director of day school programs at Gateways: Access to Jewish Education in Newton, has a big job: She needed to make sure students who received special services were covered remotely.

“My staff had to quickly change and learn how to do their therapies with students online versus in person,” she says.

For instance, speech and language pathologists needed to obtain 10 hours of continuing education credits to get up to speed. “And they did it,” she says.

Over the summer, staff is training to reach out to families from a mental health perspective to see how kids are coping and to “see who might need a little bit of extra eyes on them or attention at the beginning,” she says, assuming school resumes in-person. “I think the partnership with parents is going to be even more critical than it always has been as we help kids transition from being home pretty exclusively with their families” to potentially coming into school, she says, depending on guidelines.

This situation isn’t ideal for anyone. But Maimonides’ Carrus tries to stay optimistic, even though she misses her class.

“We now have this moment where we need to think about what opportunities this gives us to be creative, to push something new or try something that has never been tried before,” she says. “Creativity comes from breaking through boundaries. There’s no reason to feel defeatist.”

Instead, she’s had to be innovative as an educator—helping kids learn “21st-century skills like independence,” she says.

Natalie Maryansky, counselor and director of student services at Marblehead’s Epstein Hillel School, meets with each grade once per week in a half-hour “restorative circle.” It’s something she implemented during the normal school year for kids to resolve in-person conflicts, but now it takes on fresh meaning. Here, kids can vent, talk about their anxieties and discuss fears.

“It’s an opportunity to talk in a neutral, community-based way that builds trust. No shame, no blame,” she says. “Kids could bring up a sense of longing to be back with friends, managing stress and keeping up with their schedule”—something even more important in this new, remote and, hopefully, temporary world.