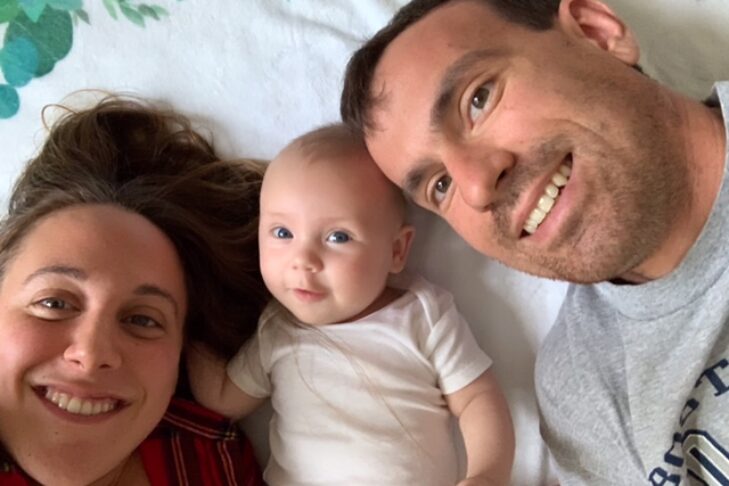 Marla and Greg Mercuri with their daughter, Paulina (Courtesy photo)

Marla Mercuri and her husband, Greg, had their daughter, Paulina, in July. After some restless nights—and a health scare—she reflects on her pandemic pregnancy and the special reason Judaism is so important to her.

Take me back to the beginning. When did you find out you were pregnant?

In November. I had a pretty rough first trimester, and I was really sick. I was living in Brookline with my husband. And then COVID hit in March, and she was due in July. So from March to May, we were in our condo, trying to figure out a house, hoping we could still close on one. We saw our house the week before everyone went into lockdown. We knew we wanted it, and then all of a sudden, no one was going into open houses at all. And my mom is actually a realtor, and this was the last house she sold before things got pretty crazy.

Did you feel scared being pregnant during COVID? What was your first social interaction with people, and what was it like?

Yeah. It was terrifying, especially as the death toll numbers were going up. Around May, June, it was getting really scary. I’ve had anxiety since my baby was born, but I was starting to get bad anxiety about it when I was pregnant. I don’t know if you’ve seen the movie “Contagion,” but it just keeps getting worse and worse and worse, and we were both terrified. We were like, “I guess we’ll keep going and hope that things get better.”

We started hearing about hospitals in New York where only the wife could be giving birth. The husband couldn’t be there, that kind of thing. That was probably scarier. Not scarier than the death toll, but it’s pretty scary to try to think about that. What if something happened? What if I had to go into surgery? That kind of thing. What if the nurses were all sick? What if the doctors were sick? My doctor was through Brigham and Women’s, but they’re located in Chestnut Hill. Suddenly my husband couldn’t come to any of the ultrasounds, which was devastating. I had a little video of me sitting there and just staring off into space with my mask on. It was really odd. And it’s really sad seeing your baby move without your husband being there, and he was sad he couldn’t see it, either. So that was a sad part of it. By the time I went into labor, we [had moved to] Framingham. I went into spontaneous labor at home; my water broke while I was watching “Frozen 2.”

They don’t let husbands into OB triage, ever, not even in a pandemic. So they ask you questions, try to read your contractions, all that, and then they admit you. That I had to be all by myself in labor with the most painful contractions was really devastating, and I was crying. My husband was stuck downstairs waiting for them to give him the OK that I had a room, that he could come up. And I’d say that was maybe four or five hours being there. I was so upset. I was pleading with the doctor to let him up.

I will say this: Brigham is really good about sensitivity to patient needs. So they saw that I was upset and they were like, “Well, he just has to wear a double mask.” They worked with us about that, because they saw how upset I was. For whatever reason, the day I went in was a crazy, busy birth day. But I only had 10 pushes and she was out! 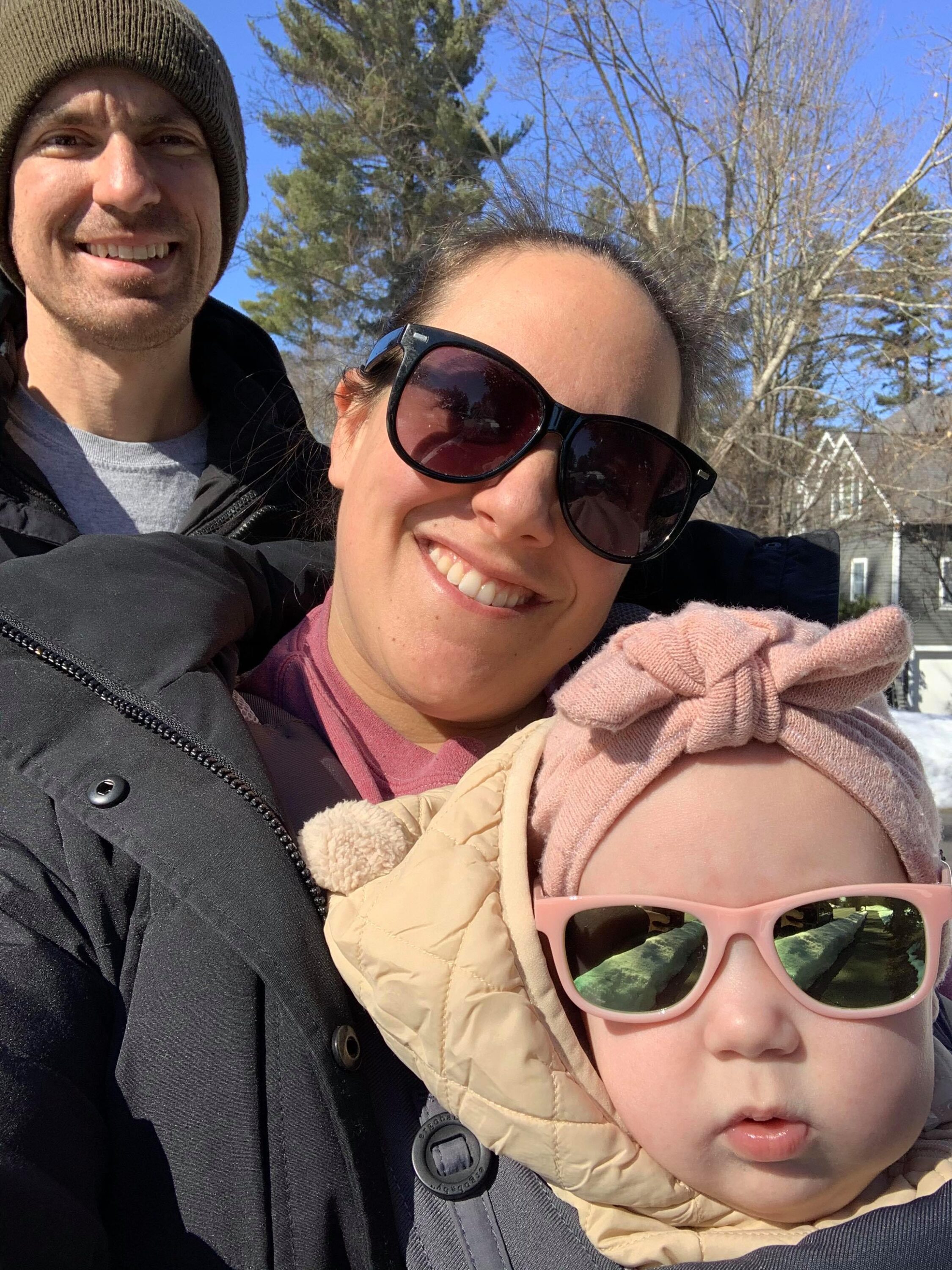 Marla and Greg Mercuri with their daughter, Paulina (Courtesy photo)

How has it been to have a newborn during this weird time?

It is really isolating. Most of my friends had their mom groups. They could go hang out at the park and share stories. Then people came over and helped them. For us, I had some serious baby blues after, bordering on postpartum depression. I was part of an Instagram moms’ group, but it’s different doing it digitally.

I want to touch on that for other moms who might be experiencing feelings of depression or loneliness. What did it feel like? What helped you?

My husband honestly helped me through it for the most part. My mom was also there, but it’s harder for her because she’s so far removed from the situation. And besides that, I finally opened up to my mom group on Instagram. Even just reading those words, “Yes, this is also happening to me,” was helpful, but I think it could have been even better if it had been in person. It would have been a shoulder to physically cry on, as opposed to crying over my texts.

Did something specific trigger the depression?

Right after Paulina was born and we came home, she didn’t sleep for two days, two nights straight. We were up for maybe 48 hours. Then we had kind of a weird situation. She was choking on something and coughed up mucus. We didn’t know what it was, so we went to the emergency room with her the next night. So we were also sleepless that night. And then I had a routine doctor’s appointment the next day, and they said I had postpartum preeclampsia. I had to go back to the hospital the next night. It was this list of things that kept happening, and I was so hopeless.

My blood pressure was pretty high, 190 over 100, something crazy. I was at the doctor and they said, “You need to go to the hospital right now. You could have a stroke at any moment.” I didn’t have any solution for feeding. I was breastfeeding, so I didn’t have any way to send my husband and the baby home without me. So they had to come to the hospital with me and they made me sign this waiver that they weren’t going to touch the baby at all and she was my responsibility. She was up all night that night, which only made my blood pressure worse. And that was kind of the start of everything.

How are you doing now?

That was all in the first five days of having her home. Now I’m good. After the last hospital stay, my husband really took on a lot of the hard work. He did all the overnights so I could sleep. I had to start pumping to make things easier, so he could give her a bottle at night. And getting sleep was a huge help. We even got a night nurse once a week. And just to know that we had one full night of sleep coming, the both of us, was amazing. It’s obviously a deterrent financially. I think it was $200 a night, and honestly, I think it was well worth it. It’s basically like going to a hotel, but someone’s coming here. So that was really helpful. Ever since then, my mom comes over and helps. Having the grandparents all in our bubble and all on the same page has been excellent. If they weren’t, I don’t know what we’d do.

How has Judaism influenced your parenting decisions?

I always knew that I wanted to have Jewish kids. Greg wanted to have Catholic kids. My sister passed away a few years ago at 27 in a motorcycle accident, and seeing how the Jewish community came together for us was a huge factor in having kids raised in a beautiful, supportive community. My husband was around for that, and he really appreciated how everyone was there for us. My dad, he goes to an Orthodox temple, and I was raised Conservative. But regardless of your sect of Judaism, there’s always that part of the community that’s going to show up.