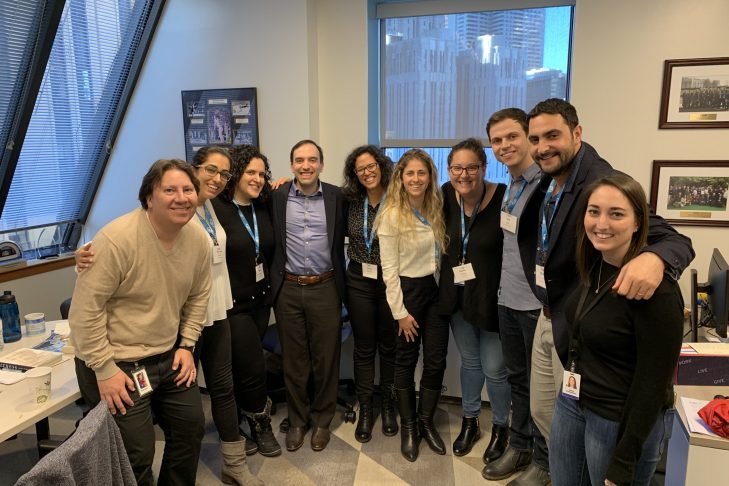 This year I had the most unique Hanukkah of my life. I had the privilege of participating in a mission of six young adults from Boston-Haifa’s Young Leadership Committee coming from Haifa to the Greater Boston area, invited by Combined Jewish Philanthropies. The aim was two-fold: to have time for strategic thinking about our activity in Haifa, all the while being exposed to and inspired by the activity carried out in Boston and surroundings. This invigorating journey strengthened both the connection and the mutual familiarity that all of us in the delegation share with our counterparts across the Atlantic. Furthermore, it made me wonder about the purpose and meaning of this important relationship currently, which is sometimes characterized by growing mutual misunderstandings.

If the Maccabiah is the Jewish Olympics, in the eyes of an Israeli, our schedule seemed somewhat like that of the Mardi Gras festival for its unusual diversity and creativity. During our six-day blitz in Boston, we got to see a show of an African-American Hasidic rapper Nissim Black, visit the Mayyim Hayyim pluralistic mikveh, be dazzled by the artsy glow in the dark menorah at the Museum of Fine Arts and drink specially made Hanukkah cocktails at a pop-up bar. Those are all important to note since the innovation and rethinking that characterizes those initiatives is not a common Jewish sight in Israel. In all the richness that we encountered, we found the communal and cultural nature acting as the driving force, keeping both community and identity together. Other activities, such as the visit to the Anti-Defamation League’s Boston branch or the food packaging volunteering we participated in through Jewish Family & Children’s Service were prime examples of the American institution building abilities, through which the Jewish values of chesed, tzedakah and tikkun olam are being materialized.

Jews immigrated to the United States as early as the late 16th century, but the major waves of Jewish immigration to the United States took place between 1880-1920. In that period, over 2.5 million Jews made their way across the Atlantic, mainly from Eastern Europe. Like all immigrants, they had heard the stories of the country of limitless opportunities as motivation. Similar to other immigrants to the New World, they were persecuted in their old home countries and had high hopes for a country that proudly declared its separation of religion and state. This American fundamental principle has a deep influence on the Jewish way of life. In the “land of the free,” you must be proactive regarding your Jewishness and the Jewish institutions must keep up with the dynamics of its followers or risk losing them. In the U.S., it’s the Jewish people’s actual practice that influences the Jewish establishment.

In Israel, most of the experience is the other way around. Being raised as a secular Jew, your Jewishness becomes somewhat of a default passive identity. You’re living within a society which is Jewish by distinctive majority, Jewish by calendar, and Jewish by agenda. In many ways, you take your Jewishness for granted. Most, if not all, of the Jewish practices of secular Israelis take place in the family, lacking a communal sense of belonging, or a need to organize institutions.

However, there is a growing change in the trends. In the last couple of years, many young Israeli adults of secular upbringing have begun reclaiming or redefining their secular Jewish identity. While this phenomenon is not yet mainstream, it is becoming more common. We members of the Haifa Young Leadership see this development as one of our major aims—inviting Haifa’s young adults to ask themselves “How do you Jew?” and participate in youthful, cultural and community-driven new approaches to their own way of life. The experience in Boston has opened up our minds and broadened our horizons as to what we can do to address this important issue.

The founding purpose of Israel is being a national home for the Jewish people. As such, this mission affects the country’s policies in a wide range of subjects. Although counting over 70 years of independence, Israel is still a very young and diverse society. As opposed to the U.S., Israel, in its raison d’etre, is linked with religion, at least by ethnic context. With the passive Jewish identity of most of the secular Israelis, that sector of the population has yet to promote an actual agenda in issues of state and religion, making way for the more Orthodox streams to lead the relevant institutions and policies. For the Jewish start-up nation, Judaism is by far the field in which it is the least innovative. In Israel, it’s the Jewish religious establishment that tries to influence the Jewish people’s practice.

Toward the end of our mission, we had the great opportunity to meet with the new president and CEO of CJP, Rabbi Marc Baker. During our conversation, Marc made an observation that has resonated with me very much, and in many ways summed up my experience from the mission: the right analogy for our communities’ relationship won’t be one of brothers but rather one of cousins. If you want to stay close with a cousin, you have to put in time and effort. That’s the kind of family that you do get to choose.

Not only do we share a story, but we have a deep mutual significance. After over a century living across the Atlantic from each other, we need to take upon ourselves the mission to find the right ways to keep this relationship vivid and authentic. We don’t always have to agree, but it is very important to create the framework for understanding. We Jews were never about complete consent (as they say, two Jews, three synagogues) as much as we were devoted to an honest, fair and constructive discussion. And that’s the kind of family I choose to be a part of. 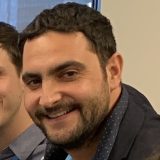 Shahaf Levy
Shahaf Levy, 32, was born and raised in Haifa. After completing an exhilarating and fulfilling eight-year service as a naval officer stationed on the Haifa base, he decided to leave his national security career and move to Jerusalem for almost five years to tackle other burning issues. During the first four years, he led a special project aimed at making certain neighborhoods more attractive to young families. He also led the establishment of a coalition of NGOs aimed at enhancing tolerance in the public sphere of the city, and served as the Jerusalem mayor's adviser for neighborhood and community development. Once the mayor of Jerusalem announced his decision to run for office at the national level, the opportunity for homecoming to Haifa knocked. Shahaf’s connection with CJP began at 2011 when he visited the greater Boston area communities on the Hatikvah mission as an active IDF officer. While in Jerusalem, he kept in touch with the Boston-Haifa Connection and since his return to Haifa, Shahaf has been highly active through the Haifa Young Adult Leadership.