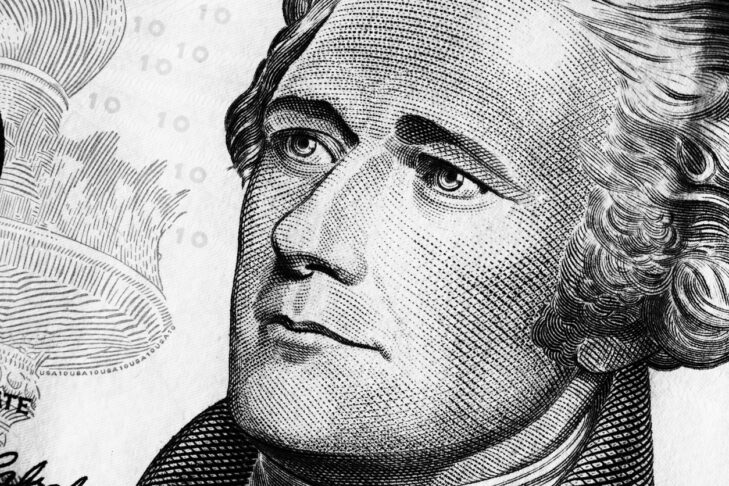 It was a hit Broadway production that first encouraged audiences to look at one of America’s Founding Fathers in a new way—Lin-Manuel Miranda’s hip-hop reinterpretation of Alexander Hamilton in the eponymous musical. Now there is another reappraisal—one marshaling evidence that Hamilton, generally considered a lifelong Christian, may have been born and raised Jewish. It’s an argument made in a new book “The Jewish World of Alexander Hamilton” by University of Oklahoma history professor Andrew Porwancher.

“I have done new archival research that no scholar has before, that I hope dispels some of the myths that shroud our understanding of Hamilton’s background,” Porwancher said.

Hamilton is famous for his service to George Washington—first as the general’s aide-de-camp during the Revolutionary War, then as America’s first secretary of the treasury. He is also known for his death in a duel with former Vice President Aaron Burr. Yet there is a less well-known side to the story, including Hamilton’s upbringing on two Caribbean islands of the Danish West Indies—St. Croix and Nevis. On Nevis, according to Porwancher, he went to a Jewish school where he learned to read the Ten Commandments in the original Hebrew and described the overall experience favorably to his children decades later. Jews were well-represented among the adult Hamilton’s law clients at a time when antisemitism dogged the young republic. He gave a spirited defense of Judaism after a rival lawyer disparaged the testimony of Hamilton’s Jewish witnesses because of their faith. Hamilton also helped place the first Jew on the board of trustees of an American university—his friend Gershom Mendes Seixas at Hamilton’s alma mater, Columbia University. Although Hamilton married a devout Christian named Elizabeth Schuyler and identified as a Christian in adulthood, he only received communion upon his deathbed, Porwancher said.

Porwancher began questioning the traditional Hamilton narrative after learning about his early years in the Caribbean, including his enrollment in a Jewish school on Nevis.

“It was a rather curious decision for a historical figure whom scholars assume was a cradle-to-grave Christian,” Porwancher said.

Porwancher received a grant to do archival research in both the Caribbean and in the continental capitals of European nations that had colonized the West Indies. He researched Hamilton’s mother, who was born Rachel Faucette, married a man named Johann Levine and took his surname. It’s a surname that appears in many versions in historical texts, some of which were shared by Jews of the period.

“We don’t appreciate the likelihood that Johann Levine is Jewish, and we don’t basically consider the possibility [Hamilton’s] mother converted to Judaism, thereby rendering her son, Alexander Hamilton, a Jew,” Porwancher said. After the Levines had a son, their marriage broke up. Rachel Levine later had two more sons, including Alexander, out of wedlock with a Scottish man named James Hamilton. She enrolled Alexander in a Jewish school on Nevis, which had a significant Jewish population—about one-quarter of the free white population. No records from the school survive, but Porwancher researched contemporaneous Jewish schools from the Atlantic world and challenged the Hamilton narrative once again.

These institutions existed to “turn Jewish children into observant Jewish adults,” Porwancher said, “instilling a strong sense of Jewish identity, cultivating in each a shared sense of Jewish peoplehood with co-religionists spread out across the diaspora,” teaching the Torah and “perhaps” the Talmud. “For all of these reasons, presenting any given child at a Jewish school at the time created a very strong presumption of that child’s Jewish identity.”

Any Jewish identity Hamilton had most likely disappeared after his mother died when he was nearly 13 years old, Porwancher said. He ultimately relocated to New York for education and then work in the field of law. Porwancher said that identifying as a Jew would have compounded the difficulties he already faced as a penniless orphan.

Yet, Porwancher said, later in Hamilton’s life, there are echoes of a Jewish connection.

“What is striking about his adult years is that Hamilton maintains a certain distance from church life,” Porwancher said. “He gets a pew in Trinity Church for his wife in Lower Manhattan. He does not join himself. Her name exists in communion books from the church, not his. Juxtapose this relative indifference of Christianity with Hamilton’s emergence as a strong defender of Jewish equality in the early years of the American republic, [more] than any other Founding Father.”

He contrasted Hamilton’s position with antisemitic statements made by other Founding Fathers—“iconic American figures who were quite disparaging to Jewish people.” He noted that Hamilton’s vision of equality included abolition, as shown in the musical—“his support for the manumission of slaves.” However, he added, “to be certain, a degree of complexity is required in discussing his relationship to the fight for democracy. Many of his arguments did not believe, none of the founders believed, in the kind of universal democracy we have today.”

The democracy Hamilton helped found has endured for over 200 years into the present day. Porwancher sees enduring lessons in Hamilton’s contributions to religious freedom in America.

“Regardless of whether Hamilton had a Jewish identity in his youth or not, what’s unquestioned is that Hamilton advanced the creation of an American republic where no Jew would face cultural or legal stigma purely because of their faith,” Porwancher said. “He believed Jews and gentiles should stand upon an equality. That conviction is arguably far more important than the evidence one way or another concerning his religious upbringing.”