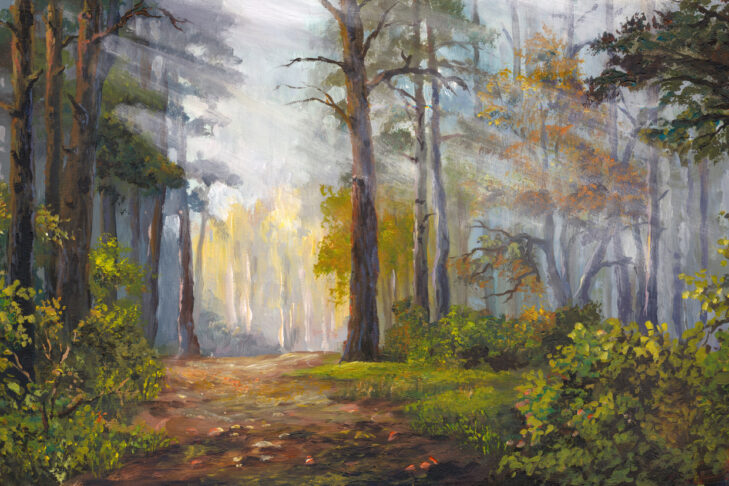 The Amazon rainforest is the most biodiverse region on earth and provides shelter to 3 million species of plants and animals. Billions of trees absorb tons of carbon dioxide every year and produce 20% of earth’s oxygen. It’s been called the Lungs of the Earth.

But I read something most disturbing. The Amazon rainforest is now emitting about a billion tons of carbon dioxide a year. From its role as a carbon sink, the lungs of the earth have become a carbon source. Deforestation by fire of thousands of square miles a year is killing off trees. On average, 137 species of life forms die out every day in the rainforest—137 species.

I remember visiting the Hoh rainforest on the Olympic Peninsula in Washington state. Though smaller than the Amazon rainforest and with different kinds of trees, it’s an eerie sensation to stand in such a rich, wet environment.

I followed a trail deep into the Hoh and looked up. A Western red cedar pulsed upward in front of me. The forest floor was carpeted by epiphytic moss and Pacific oak ferns. An old Sitka spruce lay on the ground—now a nurse log birthing new trees and insects. A stand of western hemlocks and coast Douglas fir guarded like shomrim, reaching to the sky. I could hear the chirp of chipmunks running to my right. The whistle of a golden-crowned kinglet songbird broke the air as the rising sun layered the copse in purple and yellow light.

Plants and animals don’t grow in a vacuum. It’s all connected. Without forests, the birds can’t survive. Birds disperse seeds so that forests grow. They pollinate flowers. Many eat beetles that would otherwise decimate the forest. It’s their job. This is their office. We all have our jobs to do. It’s a delicate balance.

When a species dies out, no one does its job. It’s like what happened in New York City in 1968. I had just started college. The city was exciting, alive. And then, there was a garbage strike. The sanitation workers wanted more money and for nine days, garbage began lining the streets—100,000 tons of it. I remember walking along E. 56th St. There were piles of trash reaching up to my chin. I could make out egg shells, coffee grounds, milk cartons, orange rinds, empty beer cans, papers. The smell was disgusting wherever I went. The city was grinding incoherently to a stop. It was like the municipal cycle was stuck on an in-breath with a needed clothespin on its nose waiting in idle for relief.

What we are doing to the rainforests, to me, is a sin. We’re destroying the birds’ office—the very thing they built in the first place, the very thing that’s providing us with oxygen to breathe. We’re killing off species without thinking about who’s going to fill in the hole in nature’s cycles. I am grateful for JCAN’s voice, which helps educate people about the problems caused by unthinking use of resources. In this time of Elul, we reflect on returning to spirit. We must all change and let go of beliefs that support an unsustainable lifestyle. A little thing is to not drink sun-grown coffee, which kills trees and birds. A bigger thing is to stop eating red meat. Even bigger is making your own environment sustainable. Even bigger is to educate and advocate. This change in the Amazon rainforest is a tipping point. It is time to return to a true compass and work together. This is the heartbeat of life; this is the heartbeat of a planet.

Thea Iberall, Ph.D., is on the leadership team of the Jewish Climate Action Network MA. Iberall is the author of “The Swallow and the Nightingale,” visionary fiction about a 4,000-year-old secret brought through time by the birds. In this fable, she addresses the real moral issue of today: not whom you love, but what we are doing to the planet. Iberall is also the playwright of “We Did It For You! Women’s Journey Through History,” a musical about how women got their rights in America, told by the women who were there. Iberall was inducted into the International Educators Hall of Fame for creative teaching methods. In her work, she bridges between heart and mind and teaches through performance, the written word, poetry, sermons, workshops and storytelling.