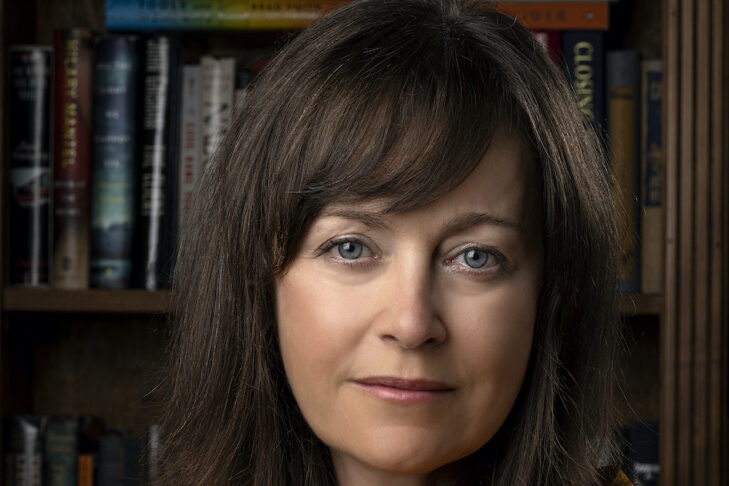 Margarita Gokun Silver is grateful for her thesaurus. She’s so grateful that she dedicated her memoir in essays, “I Named My Dog Pushkin (and Other Immigrant Tales): Notes from a Soviet Girl Becoming an American Woman,” to said thesaurus. The reason, she recently told JewishBoston over Zoom, is that English is not her first language. Born in Moscow, Gokun Silver’s mother tongue is Russian, but she’s a connoisseur of languages. She is fluent in Spanish and enjoys dusting off her Italian. She said her thesaurus is not just an essential tool in her writing arsenal but also an indispensable “writing partner.”

Over the years, Gokun Silver has lived in many countries in Europe and Asia with her diplomat husband, an American she met soon after immigrating to the United States. She also has a dog named Pushkin, who joined the family 13 years ago when she and her husband were living in St. Petersburg. The dog, a small Maltese, was a gift for her then 5-year-old daughter. Since Pushkin was acquired in St. Petersburg, it was only fitting he should be named after a Russian literary icon in a Russian city of high culture and literary tradition.

Gokun Silver is temporarily living in the Boston area and answered questions on myriad topics related to her new book.

Your book is witty, but it also addresses serious issues such as encountering antisemitism when you were a girl in Moscow.

I grew up in a society where you didn’t tell anyone you were Jewish, and I got away with it until I was 10. I didn’t look Jewish by Soviet standards—I didn’t have the right nose, I didn’t have the right eyes or hair. So, profile-wise, I didn’t look Jewish. My last name also did not sound Jewish to the Russian ear, because it is Sephardic, and Russians were used to Ashkenazi names. I didn’t know that I was Jewish until I was 10 and one of my classmates noticed that it was written in the teacher’s journal. Apparently, that was a very important piece of information to contain in the teacher’s journal. From then on, it was a constant barrage of epithets. I was called Zhyd (Jew), or Zhydovka for a female. This idea of hiding, of not sticking out, of being quiet, stayed with me. Some people call me reserved, and that has to do with those early experiences.

On a more official level, I knew that as a Jew I had limited options as to what I could study. In the Soviet system, whether or not you were Jewish, you followed in your parents’ footsteps. But as a Jew, certain careers were closed to you. There were very strict Jewish quotas. My grandparents’ generation was different because they grew up before the repressions after World War II. My grandmother graduated from medical school and practiced medicine. So, when we came to America my family wanted me to be a doctor.

Did antisemitism increase under glasnost, the Soviet policy of open discussion of political and social issues?

It did, because suddenly, there was freedom of speech. Before that, antisemitism was underground except for street antisemitism. But as far as official antisemitism in places like the media, it wasn’t present. However, anti-Zionism was translated into antisemitism in popular culture. There was a lot of anti-Israel sentiment because it was perceived as a capitalist U.S. ally. At one point, my family was scared there would be a pogrom in Moscow. We wondered whether our neighbors would point out our apartment to a mob. It didn’t happen. We didn’t hear of any pogroms, at least in Moscow, but we felt fear and danger. 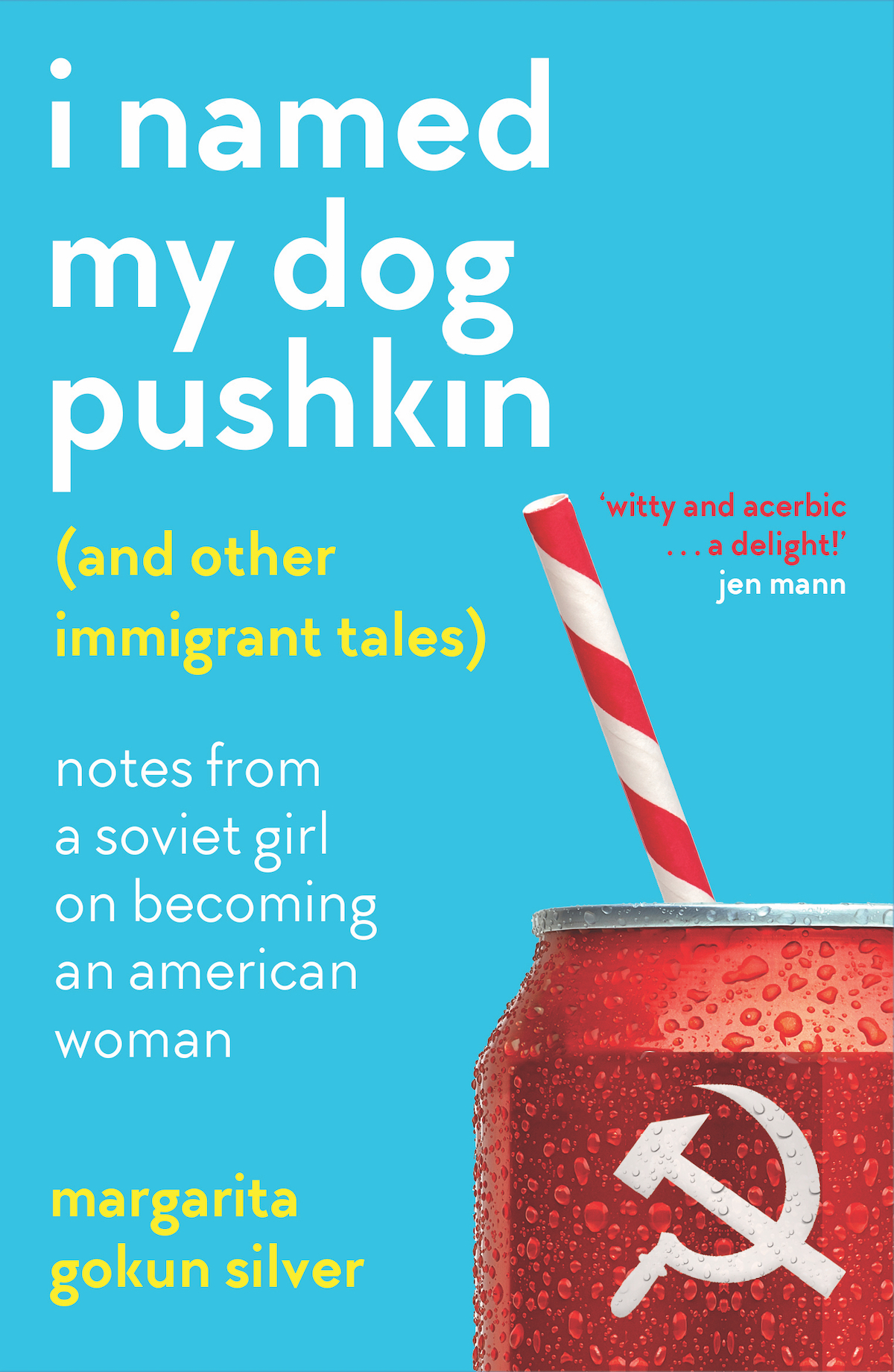 Your immigration journey was complicated. You first went to Vienna, then Italy. How did your family end up in New Hampshire?

When we immigrated in 1989, Mikhail Gorbachev reached an agreement with President Reagan that Soviet Jews were only allowed to go to what the Soviet Union said was our “ancestral homeland.” That meant we could only immigrate to Israel. Those of us who had relatives elsewhere, like Canada, Australia and the U.S., reached out to our relatives to help us get to those countries.

HIAS and the Joint Distribution Committee joined forces and created what I call “go to dead soul style relatives” who supposedly lived in Israel. None of us had relatives in Israel, so HIAS and the JDC invented relatives who sent us fake invitations to appear as if we had family in Israel. With those fake invitations, Jews requested exit visas in the Soviet Union. The vast majority of us were approved, and the trick was because Israel didn’t have diplomatic relations with the Soviet Union; there was no direct flight to Tel Aviv. We had to fly through a third country, and for us that was Austria. For those of us going to the U.S., Canada or Australia, we interviewed with immigration authorities of those countries. We spent a few weeks in Vienna and were eventually sent on an utterly bizarre train journey to Italy. In Italy, we applied through the U.S. embassy for refugee status, which we received.

We called our family in Los Angeles, hoping to join them, and they told us their circumstances had changed and they could not sponsor us. That caused a big rift in our family. My parents and grandfather were very upset. People who didn’t have any family or sponsorship applied through HIAS for any Jewish community to take them. If you were willing to go to New York, you’d be able to leave in two weeks. My father wanted to do that, but I was adamant that we not go to New York. I knew we would end up in Brighton Beach, which was “Little Russia.” We would never learn the language or assimilate. My goal was complete assimilation to become thoroughly American. Five months later, a Jewish community in New Hampshire agreed to sponsor us. We had no idea where New Hampshire was. There was no internet then, and we didn’t learn American geography in the Soviet Union. There was a tiny library in Santa Marinella where we lived in North Rome, and I looked up where New Hampshire was.

You were determined to become an American. You worked on losing your accent, and you changed your name. What did it mean to you to change your name?

In the Soviet Union, everybody called me Rita, which is a short version of Margarita. I was called Rita in a very repressive society, and I associated that name with control and repression. In America, I wanted the freedom to choose who I wanted to be; I wanted to forge my own path. I thought every time someone called me Rita, it would bring back memories of Russia. In the book, I compare the feeling to eating a bad egg that you taste for years. When I landed in New Hampshire, I told the people who greeted us that my name was Margarita, and that’s what I’ve been calling myself ever since.

What were your parents’ educational and social expectations for you in the U.S.?

Educationally, they thought I would become a doctor in America. They wanted me to follow in my grandmother’s footsteps. I was initially pre-med at the liberal arts college that accepted me in New Hampshire. Then I had an epiphany in endocrinology class. I thought, “Why am I following somebody else’s dreams?” I write in the book that I tried to compromise with my parents and went into the public health profession, which really didn’t work for my parents or me. If you’re not a doctor, it doesn’t matter how connected to the health profession you are.

The other expectations were that I would marry a Jewish man and have a family and a nice house. It was the American dream, which I partially fulfilled. I married a Jewish man, but he couldn’t get a job the first year after graduating from graduate school. We exiled ourselves to Uzbekistan to pay our student loans. Now, my parents are super proud of him because he’s been a diplomat for the last 20-plus years.

Your Russian identity resurfaces when your daughter is a teenager. What was it like for you to raise an American child?

I had my mother in one ear and my daughter in the other. I was always torn about how much freedom I should give her. In the Soviet Union, parents controlled their offspring. Kids had very little freedom. They were told what to do, and they were supposed to obey without question. “Because I told you so” was a common refrain. Raising my daughter, I tried to understand these new ways of raising a child. I wanted to offer parental guidance without controlling everything in her life. She had to have independence and space to grow and develop. My daughter demanded those things because she has a very independent streak, as I do. I used to slam doors and run away when my parents tried to control me. And so, I gave my daughter a lot of leeway. My daughter is now 21 and in her last year of college, and my mother tells me, “I don’t know if she’s doing her homework; you should check.”

You write humorously about the role of the babushka—the grandmother of the family. Are you destined to become a babushka?

Definitely! When my daughter has children, I’ll be feeding them constantly. I’ll buy them lots of things and never say no. A babushka is supposed to counteract strict parents. The babushka lets you do more things, and she feeds you incessantly. She is this super-involved, over-involved presence in a grandchild’s life. There have been memes about Russian grandmothers. There is some Russian grandmother in me, but I will try to be less smothering.