Close
Never miss a great event again!
Get the best Jewish events delivered to your inbox every Thursday with JewishBoston This Week.
By signing up, you agree to our Terms of Use and Privacy Policy.
Seniors & Aging
View all

None of us get to know our Bubbes before they were grandmothers; we never see them as young women or new mothers. They have lived an entire lifetime by the time we meet them, navigating the challenges of creating a life and raising children. To be honest, the idea that my grandmothers were ever anyone else never really occurred to me until I got to watch my mother-in-law become a Bubbe. It’s been pretty amazing.

My mother-in-law is a first generation American, the child of Holocaust survivors. She will be the first to tell you that she’s a Yekke, a German Jew who values punctuality, frugality, planning, and attention to detail. Until her grandchildren were born, I rarely experienced my mother-in-law as a warm and fuzzy person, but her love for, and commitment to, her family is undeniable, as evidenced by her visits to her own mother and aunt in Buffalo, the birthday dinners she carefully plans for all of us, the phone call check-ins, and most recently, the love and attention she showers on my daughters, her granddaughters. She’s an experienced social worker, and her insight into people and interpersonal dynamics is astonishing. She and my father-in-law helped found two Reconstructionist synagogues in Newton; first Shir Hadash, and later, Congregation Dorshei Tzedek. My mother-in-law is deeply committed to issues of Jewish life and education, as well as social justice, and she was involved with the League of Women Voters for years. She has travelled the world, from Cuba to India to Vietnam, and of course, Israel.

On top of all that, my mother-in-law is now a Bubbe, and I’ve been lucky enough to witness the transformation. As an educated, informed woman, she does her research and has opinions on everything from recipes and restaurants to synagogues and services. To be honest, I was a bit concerned about what sort of opinions she might have (and share!) when my daughters were born, but it turns out that her only opinion is that her granddaughters are fabulous little people. (As a completely partial observer, I have to agree.) The punctual, frugal Yekke seems to disappear when they walk in the door, and I see her grabbing the girls into her lap, smothering them with kisses, and giggling on the floor with them. They color with markers, read books, play with blocks, and make hamentaschen together. In those moments, it’s almost as if she’s a different person, yet she’s completely herself, and totally focused on these two little ones asking her to swaddle their baby dolls and wondering if there are any tasty treats today.

Ah yes, the tasty treats. My mother-in-law continues to shock me with the cupcakes and chocolate pudding she regularly has for the girls (and this from the woman who has been known to count the olives in a salad). She and my father-in-law make their favorite macaroni and cheese on a regular basis (from scratch, of course), and she schedules family and holiday meals around their crazy sleep schedules. She’s been saving her kids’ toys for all these years, and brings them out one at a time, so there is always a new present for the girls when they come to visit. Shoe shopping has become a tradition, and the girls have come home with light-up sneakers on more than one occasion. She loves buying clothes for them, including pink tulle skirts and matching pink sweatshirts. It’s just how a Bubbe should be, and if you had told me three years ago that this is how it would be, I would have never believed you.

If you have an amazing Bubbe or Bubbe figure in your life, we hope you’ll nominate her for CJP’s Bubbe Contest. (The winner gets to enjoy a brunch for up to eight people by Catering by Andrew, who, according to my mother-in-law, is the best kosher caterer in town!) You can also follow the contest on Facebook or Twitter. 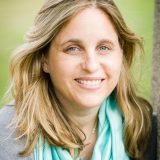