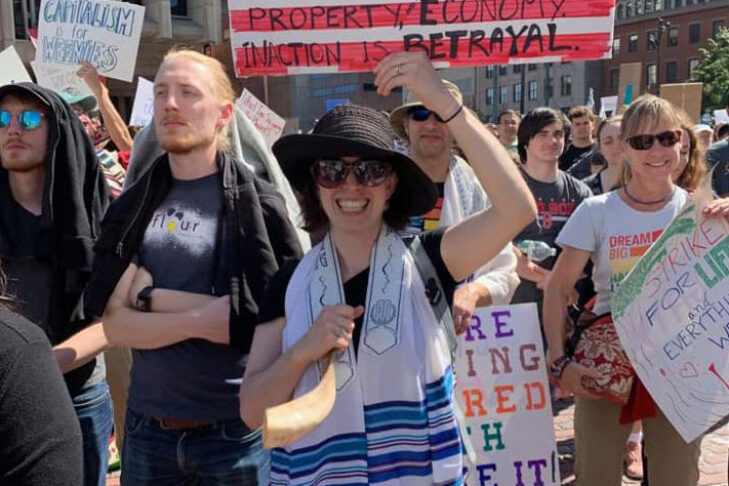 In August 2015, I received a surprising email. It was from Brian McLaren, an evangelical author and activist, inviting me to be part of a historic ecumenical and multi-faith response to Pope Francis’ Laudato Si encyclical and visit to the United States that September. The event was called “Coming Together in Faith on Climate,” and I was one of two national Jewish leaders asked to present, alongside the likes of Sen. Sheldon Whitehouse.

I had just been ordained a year earlier.

Five years ago, there were only a handful of rabbis and cantors who were taking public action on climate change. It was a strange feeling to be one of them. On the one hand, as a newly minted rabbi, I was excited by the opportunities to speak, write, sing, and organize for climate justice, often in interfaith contexts.

On the other hand, I was quite concerned by what the many opportunities coming my way signaled: There was not a robust roster of Jewish leaders mustering on climate change. The JOFEE movement (Jewish Outdoor, Food, Farming & Environmental Education) was flourishing, but the Jewish community was not yet summoning our formidable collective attention and political power toward climate action. We’d done it on issues like immigration, refugees, health care, and Israel. But we were decades behind the kind of activism the climate crisis demanded.

Jews have always been involved in the political climate movement, but with a few notable exceptions, we have done so as individuals, joining chapters in secular organizations like Mothers Out Front and 350.org, or becoming young leaders in the youth climate strikes and The Sunrise Movement. Now, after Greta Thunberg’s 2019 speech at the U.N., the fires in California, and the atmospheric clock running out, the institutional Jewish world is waking up.

Jewish climate warriors are emerging in pulpits, pews, and on campuses. They are bringing their institutions along with them, which in turn are starting to shake off decades of paralysis to join the urgent fight for our lives. Still, studies indicate that while 80% of the American Jewish community is very concerned or somewhat concerned about the climate crisis, most are not taking action.

The Big Bold Jewish Climate Fest is one tactic to change that. And the Fest is one of the signs that the mainstream Jewish community is starting to mobilize on climate. Where five years ago an event like this would have been organized by a handful of Jewish environmental organizations, The Big Bold Jewish Climate Fest’s partners include high-profile national organizations, from the congregations of the Jewish Emergent Network to organizations like Hillel International, The Bronfman Fellowship, all the major Jewish movements left of orthodoxy, Religious Action Center, and institutions of Jewish learning and leadership like Hebrew College. Whether and how these organizations begin to take serious climate action themselves remains to be seen, but their participation in the Fest is a sign we’re heading in the right direction.

The hundred or so sessions being offered online from Jan. 27-31 will cover many topics, from text study to climate policy, from racism to spiritual adaptation to the crisis. But a main thrust of the festival is to activate more Jews and Jewish institutions to take meaningful collective action.

As you participate, keep your eyes out for Dayenu: A Jewish Call to Climate Action, a new national organization committed to building a multi-generational Jewish movement that confronts the climate crisis with spiritual audacity and bold political action. Dayenu’s early successes have already caught the attention of climate prophet Bill McKibben, and they are a hint at what is to come in this new chapter of the Jewish climate movement: After the primaries, Dayenu organized hundreds of Jews to send letters and video messages to the Biden and Trump campaign headquarters and secured a Dayenu stakeholders meeting with top advisors in the Biden campaign. Over the course of their two-month election season Chutzpah Campaign, and with the help of 43 partner organizations who joined the campaign, Dayenu hosted 23 virtual get-out-the-vote events and mobilized more than 800 volunteers to call and text 803,078 climate-concerned voters in six key states.

With strong grassroots support for climate action among the Jewish community, and a large JOFEE movement poised to translate a passion for food, farming and environmental education into political power, we are seeing the beginning of a bigger, bolder Jewish climate movement than ever before.

And we have no time to waste. 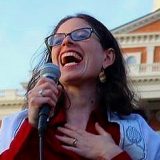 Rabbi Shoshana Meira Friedman
Rabbi Shoshana Meira Friedman is a writer, mother, activist and song-leader in Boston. She serves as the director of professional development at Hebrew College, and as a rabbinic adviser and ambassador for Dayenu: A Jewish Call to Climate Action. Her song “The Tide Is Rising,” which she co-wrote with her husband, Yotam Schachter, has spread as an anthem in the climate movement. Her writing has been published in The New York Times and YES! Magazine. Rabbi Shoshana has held rabbinic positions at Temple Sinai in Brookline, Congregation Shirat HaYam of the North Shore and JCDS, Boston’s Jewish Community Day School. She was ordained by Hebrew College and is an alumna of the Wexner Graduate Fellowship, JOIN For Justice and Oberlin College of Arts & Sciences, where she was also a Henry David Thoreau Scholar. She lives in Roslindale with her husband, son and dog.