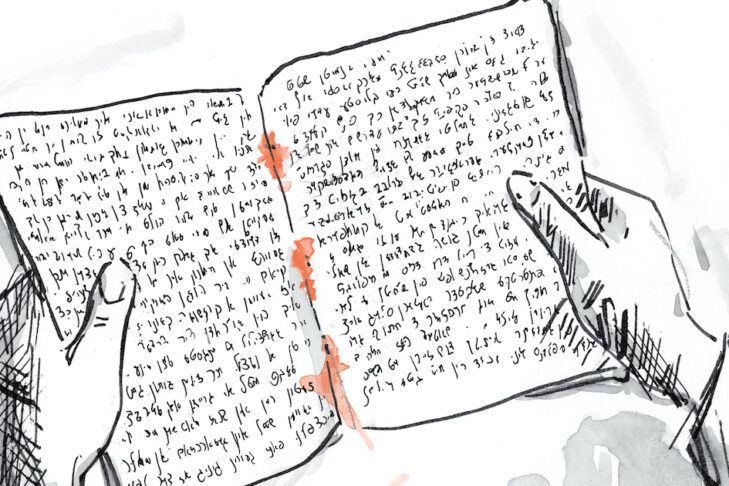 “Yiddishuania” is a neologism that New Yorker cartoonist and graphic novelist Ken Krimstein invented in service to his new book, “When I Grow Up: The Lost Autobiographies of Six Yiddish Teenagers.” Krimstein recently told JewishBoston: “‘Yiddishuania’ is a physical space encompassing the geographic and cultural expansiveness of Jewish life in Eastern Europe. It went from Riga all the way up to Odessa and Crimea on the Black Sea. Boundaries were constantly changing, but the Yiddish-speaking world before the Second World War steadily grew and approached 11 million people.” Krimstein rescues the stories of six teenagers in pre-Holocaust Europe and illustrates their narratives with deceptively simple black-and-white drawings sparingly accented in oranges and reds.

Krimstein’s innovative project began serendipitously. A few years ago, the Evanston, Illinois, resident happened to see a notice about a talk on the discovery of thousands of pages from YIVO’S archives—the world’s largest repository of documents on Jewish Eastern European civilization. The pages had been newly discovered in the basement of a Lithuanian church, and among them were essays submitted to a contest sponsored in the 1930s by YIVO, then headquartered in Vilna. Krimstein grew up in a Jewish family in Chicago and recalled: “I first heard about these autobiographies in a social hall in Skokie. When I was a kid, a lot of Holocaust survivors lived in Skokie, and the National Socialist Party of America tried to hold a march there in the 1970s. I was looking for another project and, when these autobiographies came up, it was like a bolt from the blue. I knew I had to investigate further.” 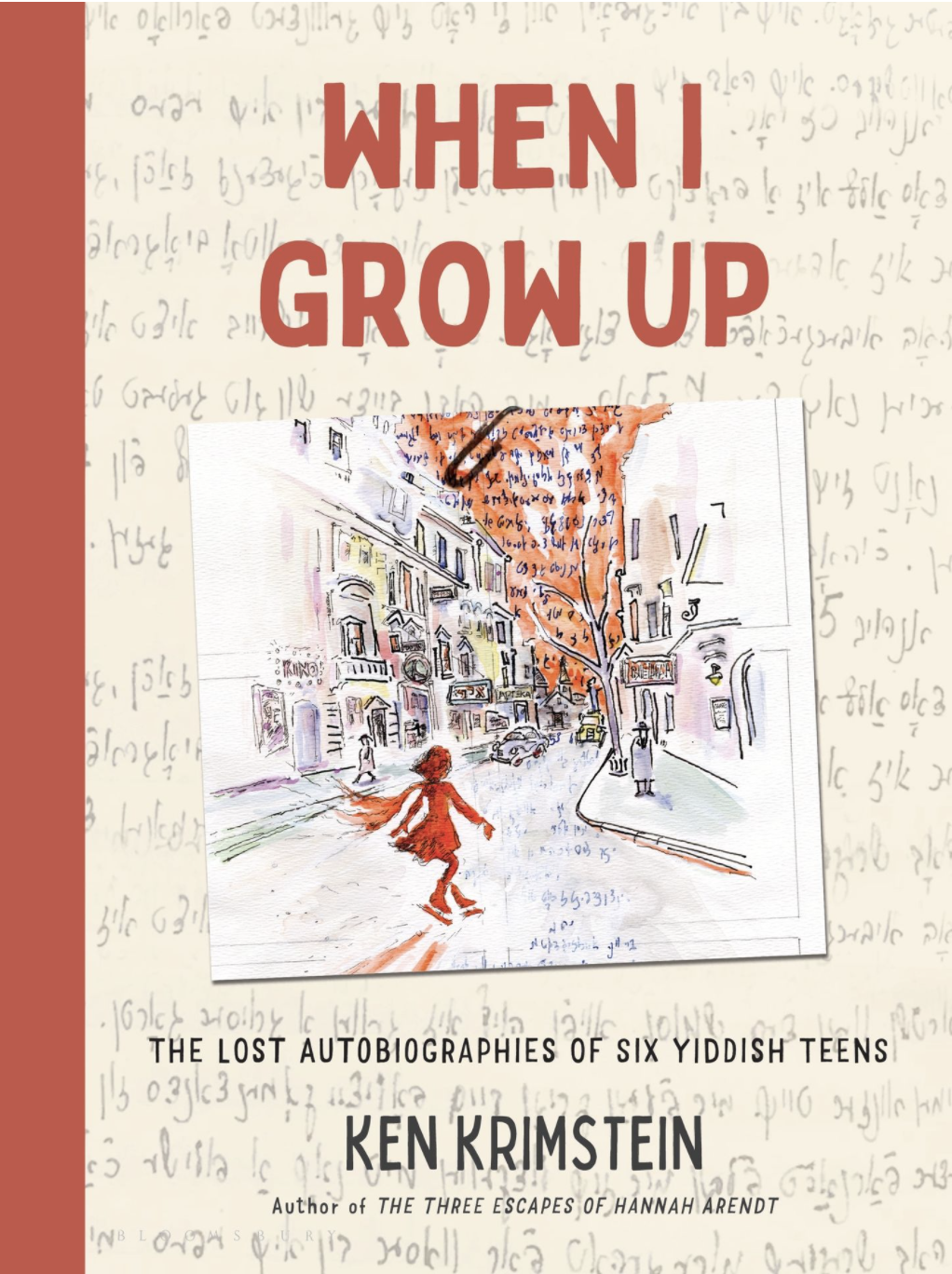 (Courtesy image)
In the summer of 2017, Krimstein went to Martynas Mažvydas National Library of Lithuania—the country’s national library—to examine the source material that became “When I Grow Up.” He encountered a pile of notebooks that looked like the ordinary blue exam books once used in American universities. Krimstein did not understand the Yiddish, but he knew he had happened upon material that captured the moments just before the Holocaust engulfed Yiddishuania. As he went through the stories with a translator, he discovered a modern 20th-century world which Jews were unaware of their genocidal fate.

“As I was flipping through these books, I asked the researcher who was helping me in the State National Library, ‘How many people have looked at these notebooks since 1939?’ And she looked at me and said, ‘Two. You and me.’ And as I went through the notebooks, I saw the handwriting brought forward the personality of each kid,” he said. 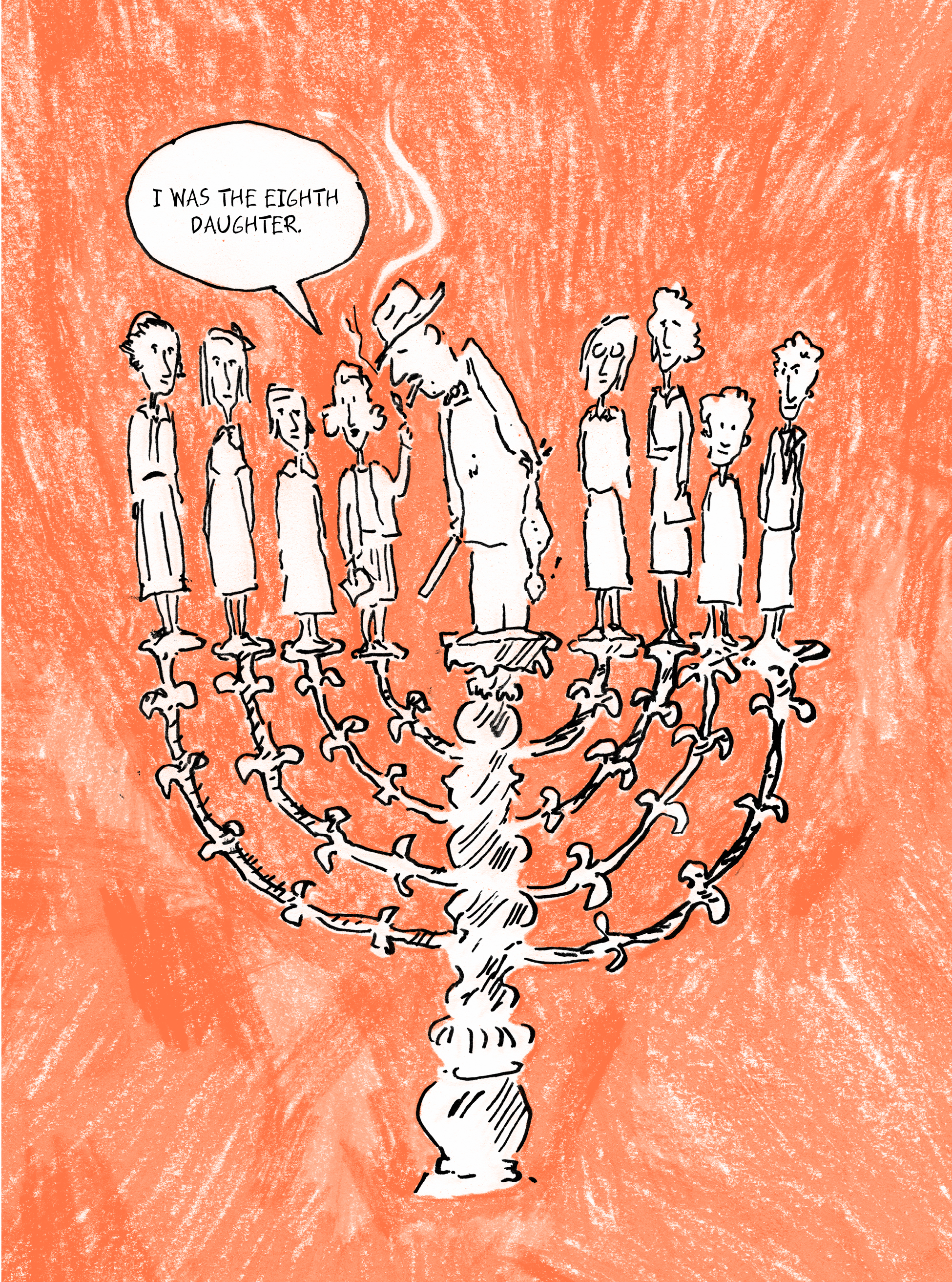 YIVO launched the contest in 1932, opening it to boys and girls between the ages of 13 and 21. The entrants were anonymous to protect privacy and encourage unvarnished truthfulness. Krimstein noted that contest judges were more likely to be won over by candor than “fancy writing.” The generous prize of 150 zlotys—enough money at the time to live on in Warsaw for a year—was another enticement to enter the contest. Krimstein writes that “more than 700 entries rolled in from all corners in Yiddishuania.” As bad luck would have it, the winners were to be announced on Sept. 1, 1939, the day the Nazis invaded Poland and the beginning of World War II. Krimstein informs readers that the winner was never announced and the prize was unclaimed.

Although many of the entries were destroyed, the surviving essays are part of a stunning story of rescuing history from oblivion. After the Nazis conquered Vilna in June 1941, they stole YIVO’s holdings to create an Institute for the Study of the Jewish Question in Frankfurt. Jewish residents of the Vilna Ghetto, tasked with sorting through the materials, smuggled and hid as much of the material as possible. This group of heroes became known as the Paper Brigade. By the time the Soviets recaptured Vilna in 1944, surviving members of the brigade dug up the documents they had buried to establish the Vilna Jewish Museum. Five years later, Stalin “ordered the entire contents of the museum pulped in retaliation” over Israeli politics. A sympathetic communist party official defied the order and stashed the trove of Yiddish materials in a church until they were discovered in 2017.

Krimstein chose a dozen stories for translation and published six of them. Among his criteria for publication were “to show the diversity of the Yiddishuanian civilization. That civilization very much reflected the diversity of the Jewish culture that was there.” He said several poignant essays didn’t make the cut “because they were fragmented or incomplete. Some were too internal and had no visual element. A story had to have incidents that made up a narrative arc from which I could draw pictures. In some of these entries, young people talked about Zionism or politics. A yeshiva boy yearned to date girls and go to parties. Some lived in cities, others in the country. I was also adamant about having an equal number of boys and girls in the book.”

A salute to gender equality, Krimstein features a story called “The Eighth Daughter,” which shows how stymied Jewish women’s roles were in religious life. A 19-year-old young woman writes that her father encouraged her literary aspirations and when he died, she felt compelled to say the Mourner’s Kaddish for him in synagogue. She openly questions why women were not allowed to say the Kaddish publicly at services. She shocks the congregation when she stands up to say the prayer, and a man stops her in mid-sentence. It’s a brilliant moment in which Krimstein shows that the woman’s feminism is her innate response to orthodoxy. 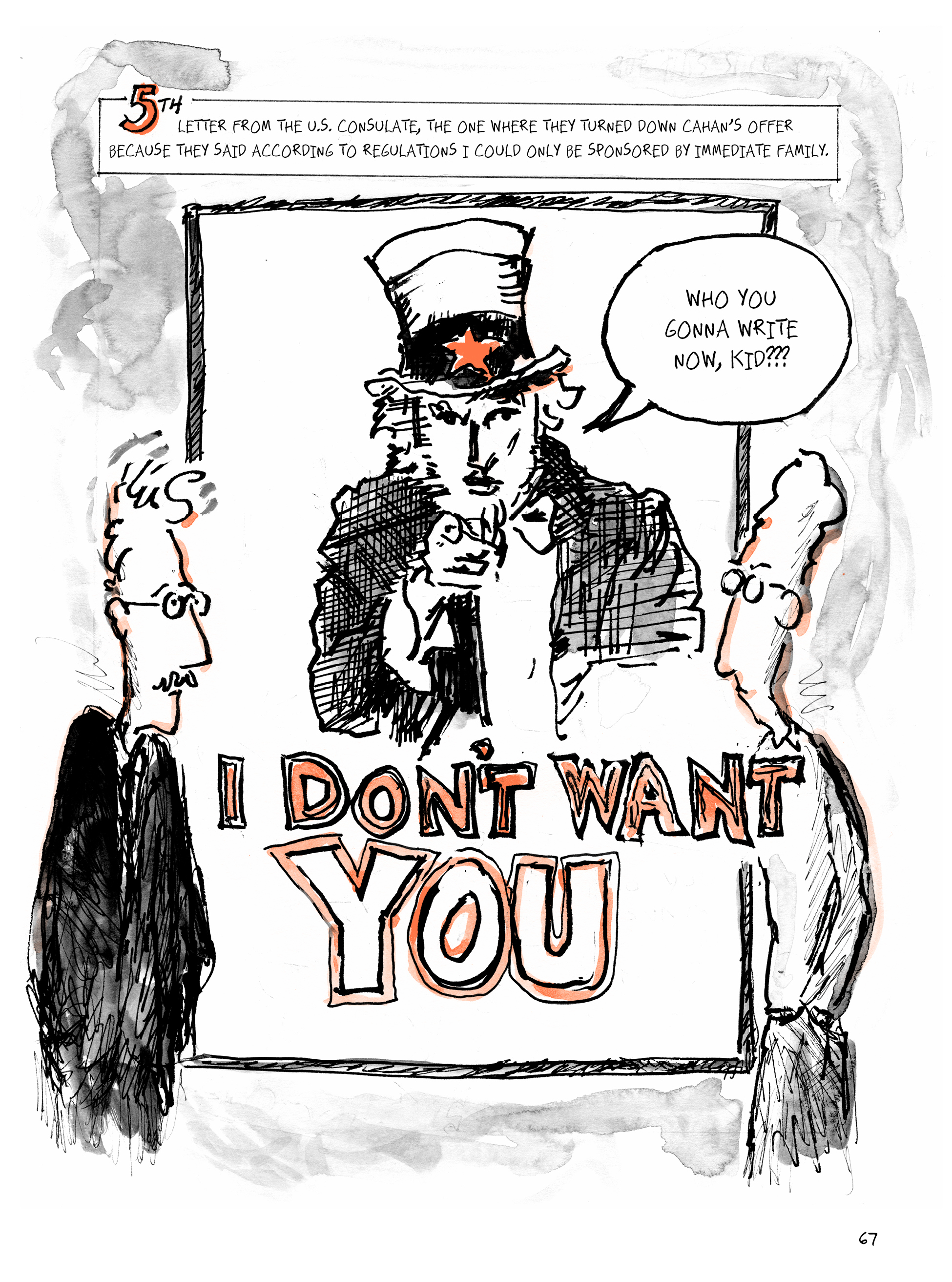 “The Letter Writer” is the only story that expressly evokes the Holocaust. A 20-year-old young man feels the first stirrings of antisemitism when his studies are interrupted because he is a Jew. He gets caught up in a bureaucratic nightmare trying to immigrate to America or Israel. He writes a series of desperate letters to an American relative, the mayor of Tel Aviv, Abraham Cahan, the editor of the Yiddish Forverts in America, and up the chain to the president of the United States.

“When I Grow Up” is a unique book about the Holocaust that will be of equal interest to older children and adults. In writing it, Krimstein has rescued Yiddishuania from oblivion. “We’re in a historical moment,” said Krimstein, “when a lot of people who had direct experiences of surviving the Holocaust are going away. The narrative is changing from one of reportage to one that feels like an impossible fairytale. These stories are so profound to me because they show these were ordinary people who could have been you or me, or our kids.”

Ken Krimstein will be appearing virtually at the Jewish Community Center of the North Shore on Tuesday, Feb. 8, at 7 p.m. Register here.