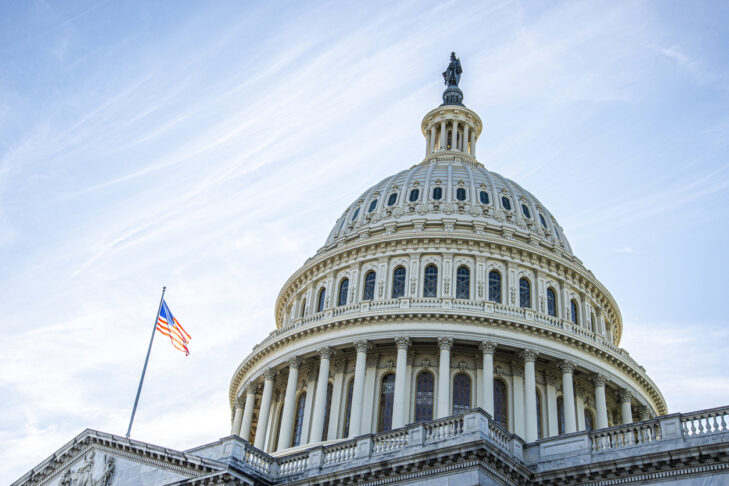 U.S. Rep. Jake Auchincloss (D-MA) was pleased with the results of the recent bill condemning rising antisemitism, House Resolution 1125. Not only did Congress pass the bill on May 18, it did so by a convincing margin, with 420 voting for it, one opposed and eight abstaining.

“It demonstrates that members of Congress are universal in condemning antisemitism,” said Auchincloss, who is Jewish and has experienced antisemitism himself in life.

Auchincloss joined the rest of the Massachusetts congressional delegation—nine members in total, all Democrats—in voting for the bill.

“Antisemitism has no place in Massachusetts or anywhere in this country,” said congresswoman Katherine Clark, assistant speaker of the U.S. House of Representatives. “I was proud to stand together with my colleagues and the Jewish community in passing this resolution. The Jewish community is unfortunately no stranger to hate but they are also resilient and will always have a friend in me.”

“The rise of antisemitism in America is alarming and inexcusable,” said Rep. Seth Moulton. “Just like many other communities, the Sixth District has sadly experienced it firsthand. Congress must come together to condemn antisemitism and hatred of all forms.”

“It’s critical that in a time of rising antisemitic rhetoric and violence that Congress name, identify and condemn the problem and also regard itself to be part of the solution,” Auchincloss said.

The bill was introduced by Rep. Debbie Wasserman Schultz (D-FL) on May 17. It cited antisemitism as a reason that many Jews immigrated to the U.S. historically, and referenced President George Washington’s historic promise of tolerance to American Jews in a 1790 address to the Touro Synagogue in Newport, Rhode Island. Yet it lamented worsening conditions for Jews in the U.S. today, from online harassment to physical violence, based on data from multiple sources, including the American Jewish Committee (AJC), the Anti-Defamation League and the FBI.

In 2021, the AJC reported that 24% of U.S. Jews personally experienced antisemitism over a 12-month period, while 90% of Jews in the U.S. described antisemitism as a problem. Since the 2018 mass shooting at the Tree of Life synagogue in Pittsburgh, over half of the AJC survey participants—56%—said their synagogues have increased their security measures. The bill also expressed concern over antisemitic conspiracy theories—including COVID-19 misinformation linked to Jews during the pandemic.

“We must always be on guard,” Auchincloss said. “I am deeply concerned by rising antisemitic violence on both the right and the left. It needs to be condemned by politicians, activists, civic and social leaders everywhere, because we know that Jews are often just the first in line for this type of hate.”

The bill called for bully-pulpit condemnations of antisemitism from authority figures, as well as for complementary actions from the Department of Homeland Security and social media companies.

“We need politicians to have the courage, also, to name and condemn members of their own party who are engaging in antisemitic rhetoric and violence,” Auchincloss said. “That is the key.”

Additionally, the bill called for action on a global scale, including through the office of the Special Envoy to Monitor and Combat Antisemitism, Deborah Lipstadt, and in cooperation with the Inter-Parliamentary Task Force to Combat Online Antisemitism.

Auchincloss said that in addition to denouncing antisemitism, it is also important to recognize “the positive, productive story of contributions of American Jews to American civic, political and social life over the centuries.”

“We really have a compelling narrative,” he said. “We want to be on the move, telling our story, being proud and proactive.”