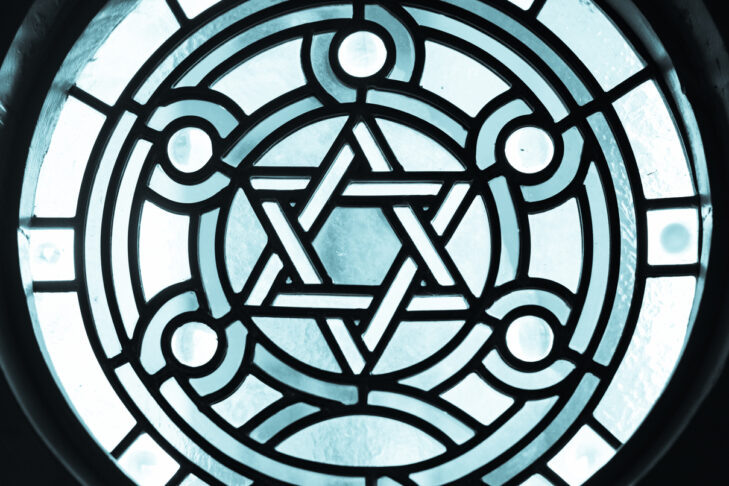 How do interfaith families navigate Yom Kippur, especially during the pandemic? Who fasts? Who attends services? What about the kids? We asked three Boston-area families to share their stories.

To kick us off, here’s the story of Hillary, her husband and two daughters. Hillary’s mom died not long ago, and during the High Holidays she thinks about her childhood.

“The holidays have always been my thing with my girls—except for the meals! We all love the meals. The food’s the best part, and I love food, usually centered around family meals and foods from my past.

“Then there’s the religious part, the services and that experience. When it comes to services, that’s usually my girls and me, or just me alone, depending on which service. Our temple has a variety of different ways to participate. In the past, we’ve done a lot of the family services, and that would just be my girls and me. On Yom Kippur, I always additionally do Yizkor for my mother.

“When my husband and I were dating and got serious, we established that I very much care about my Jewish identity and cultures and tradition. In his younger years, I think he went to church, but his family is not religious at all. We’ve always gone to his family’s house for Easter—bunnies, chocolate, eggs. I’m not a super religious person, but I love my Jewish identity and what that brings to my belief system. To be honest, my husband, while not being Jewish, has a very similar belief system and that’s why I think we work well together: being a good person, taking care of the community, giving back, the importance of family, being open to questioning. I wanted to raise our children Jewish but teach them about all belief systems.

“My oldest started Hebrew school in kindergarten because it was also a way for me to figure out our Jewish community locally. My youngest started at first grade. I’ve found a nice community of Jewish friends, and my oldest just had her bat mitzvah in March. Because of COVID, they allowed for a total of 18 people in the temple, and everybody else was on Zoom. It was nice; people who never would have come to Boston were able to watch it. Then we had one of those revolving parties in our front lawn.

“For Rosh Hashanah, we always make brisket—a family recipe. And my girls have requested kugel. We attend family services, outdoors. I have a Zoom link for a morning service; with COVID, I try to avoid going in person. My family is in Florida, which is bittersweet. But the four of us do our thing, or we’re with friends.

“During this time of year, I think about family and my childhood. The first thing that comes to my mind is that my mom always used to take us shopping for a brand-new outfit. It was the only time of year I’d wear stockings! I remember services being long and torturous, but I also looked forward to them every year because they were tradition. I remember going with my grandpa, too, and how meaningful that was. Even a Friday Shabbat, there’s something about the songs and the tunes. It’s just that connective tissue. I’m here in Boston, and most of my family’s not, but yet we’re all listening to the same songs while doing the same thing this week. And this is something that was very important to my grandparents, and it was important to my mom and it allows me to think about family.

“I remember my mom going to services for her parents when they passed away, and I never went with her. Then I started going after she passed. It was just beautiful and allowed me to spend time not being sad. Well, I do get sad, thinking about her, but she fills me up during that time. All the time, but especially during this time.”

Sharon lives in Metrowest. It’s been a difficult year for her—in addition to the pandemic, she was diagnosed with breast cancer. Happily, she’s doing well now and using this time to reflect and appreciate her life with the support of her Irish husband and two college-aged sons.

“My husband is actually Irish. He’s from Ireland. I don’t think he ever really met a Jewish person before me, which is really kind of funny, because I’m pretty Jewish!

“It was important to me to raise the kids Jewish. So that was part of the deal. But we don’t ignore that there’s this Irish-Catholic side. In fact, we often will go back to Ireland for Christmas. But we have raised the kids Jewish, so they both had a bar mitzvah. My husband’s completely supportive. Although he clearly doesn’t read Hebrew or really know what’s going on, he often will support us by going to services.

“For Yom Kippur, we do it the same each year: We usually have a nice meal beforehand, the traditional chicken soup, chicken, the whole spiel. And then he skips out, and I get whichever of my kids will come with me. My younger one will always come with me to Kol Nidrei—my older one, not so much. And then we fast in the house, and he always says he fasts. I’m positive he doesn’t because he goes out and does various things during the day—nor should he! But he tries to fashion solidarity. Isn’t that nice? And we go to services as a family on Yom Kippur. If you think about a guy who grew up in Ireland and never knew Jewish people, it just makes me laugh. It’s a very loving gesture.

“My sisters and my parents live nearby. We break the fast in our house, and I always laugh because I always say to my husband, ‘Are you really breaking the fast?’ And then I say, ‘Don’t tell me, because I don’t want to know and I don’t care!’

“We’ve presented it to them as an opportunity to do that. Like a lot of kids, they never really wanted to go to services. They felt like it was long and boring. We said this is the one day in the year that we say stop: You can’t play sports, school’s off. One of my sons is very athletic, but we always said, you can’t play your sports. They always had annoying league tournaments with no school. But my kids had to go to services. It’s the one day where you just take a minute and you breathe.

“This year, besides all the ridiculous pandemic craziness, I also had breast cancer. I’m good now. And it makes you look at things a different way. It puts things in perspective. Some stuff doesn’t matter so much. Honestly, it sounds so cheesy, but I’m going to spend the day being grateful because I feel like I dodged a bullet between COVID and cancer. It’s been a crazy year, so I’m just going to take this moment.”

Dan and his wife, Jenny, and their young children live outside Boston. Dan is Jewish; Jenny is not. They both have their own ways of observing Yom Kippur—and of thinking about its broader meaning.

Dan: I’ve been doing Yom Kippur essentially the same way since I left college, which is I fast. Occasionally, I’ll go to services and I’ve taken my older daughter a few times. I fast—but I do drink two cups of coffee. I will out myself here. I consider it medicinal. If I don’t get that drug, it’s not good for the people around me. As a parent, it’s very hard to fast between the hours of 4 and 6 p.m. My wife fasts for empathy. She does a sympathy fast.

Jenny: Lately, I have been a little bit of the driving force behind services and things because I want our kids to experience both, and I’m not giving up Christmas. I made Dan turn on Rosh Hashanah services the other day, just while we were eating lunch, because I felt like we should do something. I used to go to services before our kids were born. We would go to Dan’s mom’s hometown in Pennsylvania. We would go to services at the world’s smallest Conservative synagogue, and I even wore my non-leather shoes. I even walked there! Otherwise, it’s a day of fasting. And for me, it often coincides with the beginning of the school year or at least close to the beginning. I’m a very cyclical human being, and I do feel like it’s a new beginning.

Dan: The one thing that’s disappointing this year is the reminder that we haven’t actually gotten that far, because this was supposed to be the year when we would be able to re-gather again. The Jewish ritual is about people being in the same place; there’s literally a requirement that you have at least 10 people to be able to really do anything, and it’s 10 people in person because they never envisioned Zoom. So the idea that you can’t gather is a downer. The fact that I can’t go to a service is a reminder that we haven’t gotten as far as people thought we were back in June. As for the deeper meaning of Yom Kippur, I look at it from a secular viewpoint. I think about how we trashed the environment and how climate change is beginning to alter the planet. And I think: What can I do? What have I done in the last year to make this worse? How can I be better? And how can I teach my kids to be better? This is a time that we have to think about and really atone for the awfulness that we’re doing to the world.