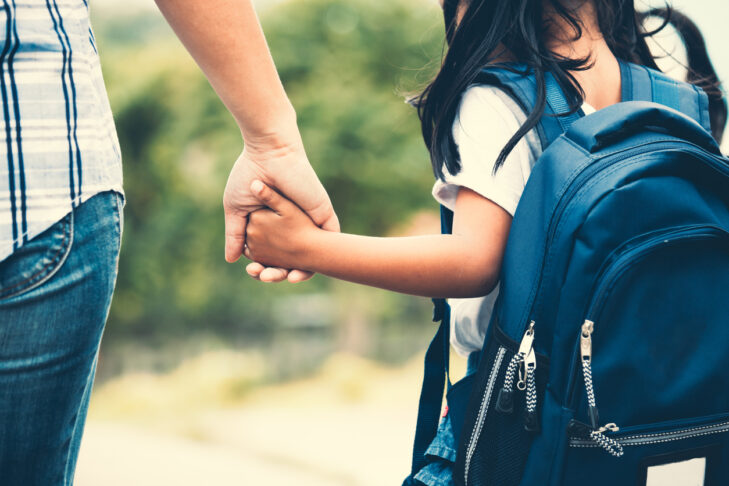 My sixth-grader has anxiety. He gets it from me, I’m sure. But while my longtime, medicated, mostly latent issues manifest through panic attacks and rumination over slightly far-fetched scenarios (Am I dying? Is my breathing too shallow? Will I accidentally insert obscenities into this article?), his are far more grounded in reality. This makes them a little bit tougher to treat.

For instance, I can tell myself that the odds of unwittingly adding profanities into this sentence are pretty damn slim. Andy, meanwhile, worries about things like schedules and routines: He doesn’t like being dropped off in new places, he gets nervous if we’re five minutes late coming home (and texts multiple times to prove it) and likes to know how the day, week, month, year will unfold. Sleep-away camp was a big step for him, and I’m so psyched he tried it—but now he’s worried about going back again. (Yes, we’re being asked to re-enroll by September!)

School is dredging up some of these worries. He’s going to take a new bus to a new part of town. He’s starting at a new school with unfamiliar teachers. He’s going to start switching classes, not to mention having way more homework.

During the day, he’s calm and cool, but at night, these simmering fears burble to the surface. He wants to know how he’ll get a bus pass. He wants to know what to do if he doesn’t catch the bus home. He’s wondering who will pick him up on days he doesn’t stay after school for a club. He wants a plan—and life doesn’t always work like that.

As someone who suffers from anxiety—and writes about it, and volunteers about it—I’ve come up with some efficient ways to help him. Sure, sometimes I snap: when he texts me 20 times in a row to ask the same question or blubbers when I drop him at a new baseball field and have to go to my next port of call, I lose patience. But, in quieter moments, here’s what I try:

Ask “and then what?” Let’s say he’s afraid of missing the bus. I press him to drill down and identify the underlying fear that’s triggering the worry. So you miss the bus. And then what? You’re left alone. And then what? “Nobody will come to pick me up.” And then what? “I’ll have to sleep at the school.” Gradually, the scenarios become so preposterous that he realizes somewhere along the way they’ll get rectified before he’s snoozing lonesomely in a locker.

List the arsenals of support. He hates being in unfamiliar places, so I remind him of his army of tools: He has a cell phone to call us if he’s lost and map apps to show him where he is. He has phone numbers for my dad, my brother and friends if somehow we don’t answer. He knows how to call the police and he knows where he lives. He understands where to find help if he needs it.

Tell a story. Andy loves to hear tawdry tales of my life in middle school, mainly about how mortifying situations turned out—like the time I got diarrhea on a chair lift (ruined my neon purple snow pants) or the time a kid got rolled down a hill stuffed in a trash barrel while everyone watched (this is before social-emotional learning was at the forefront). The message, of course, is that I made it through middle school—and he will, too.

Practice tough love. Fittingly, this is the toughest to execute. When I have a health anxiety spiral, my husband has been coached by my therapist to only answer a question once before refusing to engage. I can ask him one question (“Is this a lump? Should I call the doctor?”), with no repeats. I know firsthand how incredibly hard it is; it’s like an itch I need scratched over and over again for reassurance. But scratching keeps the wound open, and reassurance is a bad band-aid. I realize this, and so I inflict—or gift—Andy with the same treatment. I don’t always respond when he texts ten times in a row. I sometimes answer, “I’m not sure” if I can’t give him a concrete answer, even when he demands one. I occasionally leave things deliberately open-ended so he’s forced to sit a bit with discomfort. I can’t bulldoze every obstacle for him to assuage his anxiety; resilience is a muscle that needs to be worked on. I’m not doing him any favors otherwise.

Next up, I’ll have resources and outlets for getting support in more dire situations.  In the meantime, I’d love to hear your techniques for dealing with a functional but anxious kid, especially as the new school-year …eeek!…unfolds.