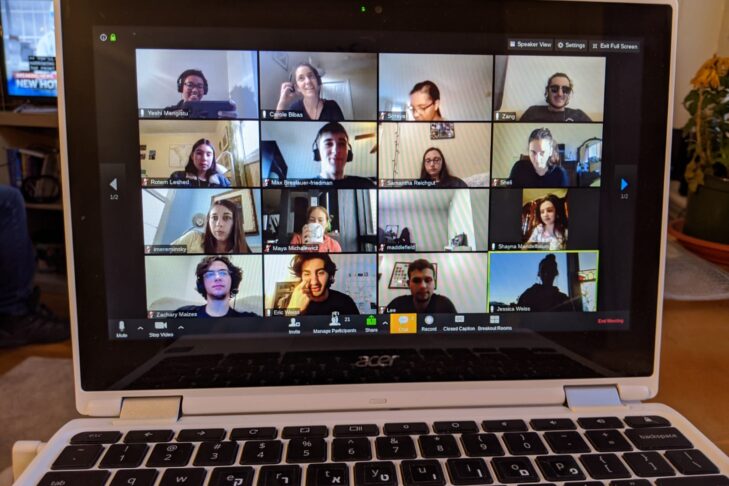 The Israelx learning series was a unique and inspirational program that focused on Israel, Judaism and multiculturalism. Throughout the series, Israel Fellows from different Hillels around the United States gave interactive and powerful lectures focusing on different elements of their personal identities. These ranged from conversations about music, life on a kibbutz, military service in the Israel Defense Forces and multinational identities.

The Israelx learning series was hosted by Yeshi Mengistu, a second-year Israel Fellow at Northeastern University in Boston, with support from Combined Jewish Philanthropies. Mengitsu, who was born in Ethiopia but immigrated to Israel with her family, felt that it was vital for students to see the different cultures and experiences of Jewish people. “The Israelx program was designed to teach students the connection between Israel and the Jewish people, to help them connect with the Jewish community in Israel and to understand why these Israelis are passionate about both being Jewish and Israeli,” Mengitsu explained. “Through this interactive series, students were exposed to some of the most passionate Israel Fellows with some fascinating stories.”

The learning series included 40 Jewish and non-Jewish participants who were selected for the program. These students came from diverse backgrounds, which allowed for meaningful conversations and great questions for the guest speakers. Additionally, students were treated to a delicious kosher dinner during each learning session. Each participant also received a stipend upon completion of the course. Both the stipend and the dinners were made possible thanks to generous grants from CJP and Maccabee Task Force.

One of the speakers, Tom Barkan, the Israel Fellow from the University of Connecticut, grew up on a small kibbutz. After finishing his service in the IDF,  Barkan felt motivated to foster a connection between Israel and American Jewry on college campuses. Another speaker, Carole Bibas, moved to Israel from France as a teenager and served in the IDF. As an Israel Fellow at the University of Virginia, she now works to help connect students to their unique backgrounds and diverse cultural identities.

A really exciting class involved Moroccan Jewry. Students learned about Moroccan culture in Israel and the different holidays and celebrations that are unique to this community. It was also an interactive session where students made sfenj, a fried dough-like pastry. The food was delicious and the evening was fun and engaging.

As Mengitsu explained: “One of the goals of the program is to show the diversity of Israeli society. The different speakers are a source of inspiration for me and I wanted the students to be exposed to them and to the personal story of each and every one of them.”

One of the most interesting aspects of this lecture series was the timing. While the first six lectures were conducted in person at the Northeastern Hillel building, the outbreak of the coronavirus forced the program to move online. Overall, the transition was smooth. With only minor technical difficulties, students were still able to listen to speakers, ask questions and actively participate.

Eric Weiss, a current Hillel board member who participated in Israelx, described the transition as positive. “I thought the Zoom transition went very well,” Weiss said. “I liked hearing the varying experiences of Israel Fellows on campuses around the country.” Jessie Sigler, a graduating senior, also had a positive experience with Zoom learning. She explained: “It was great being able to continue attending Israelx. Even though it was sad not seeing people in person, I still gained from the speaker, and rooms were effectively formed in order to make smaller group experiences during the session.”

Israelx was a fun, exciting and meaningful lecture series that incorporated elements of culture, religion and identity. The unique stories of each Israel Fellow contributed to a better understanding of the world around us and the diversity among us. Israelx was a total success.

Zachary Kranc, Northeastern University ’20, is the founder of the school’s Human Rights Organization. He is also an active member of Northeastern Hillel, where he has led classes such as teaching Yiddish culture.