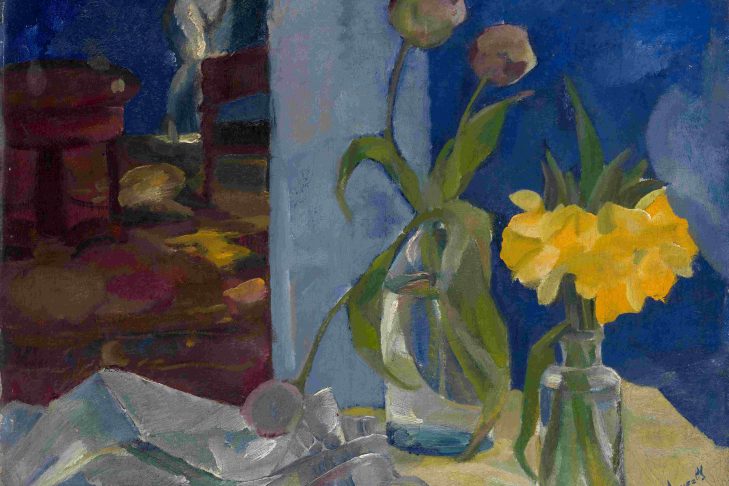 The Museum of Russian Icons is pleased to announce their upcoming exhibition, Migration & Memory: Jewish Artists of the Russian and Soviet Empires on view from October 12, 2017, to January 28, 2018. The exhibit will feature approximately 100 works drawn from the Vladimir and Vera Torchilin Collection that explore the creative responses as well as historical trajectories of Jewish artists born, trained or active in the Russian as well as Soviet empires in the 20th century. Organized by Boston’s Ballets Russes Arts Initiative and presented by the Museum of Russian Icons, it is curated by BRAI’s Executive Director Anna Winestein and structured around the themes of migration and memory that are central to the Jewish experience in this period.

The opening of Migration & Memory coincides with the centenary of the October Revolution of 1917, which transformed the landscape of choices and options for Russian Jewry, including artists, in many positive ways while also bringing enormous displacement and violence. Nearly all the items on display date from the 20th century, primarily from the period between the start of World War I in 1914 and the collapse of the Soviet Union in 1991. Highlights include works by Alexandre Altmann, Boris Anisfeld, Eugene Berman, Sonia Delaunay, Moshe Kogan, Solomon Gershov, Anatoly Kaplan, El Lissitzky, Oscar Rabin, Savely Sorine, Moses and Raphael Soyer, Eduard Steinberg, Nikolai Suetin, Alexander Tyshler, Solomon Yudovin and Osip Zadkine. Creations of nearly 50 different artists: paintings, drawings, prints, posters and illustrated books, as well as three-dimensional objects, will be on view. The works in the exhibition were not all created within the territory of Imperial Russia or the Soviet Union, but they carry within them a complex legacy, of both opportunity and suffering, cooperation and hatred, inclusion and alienation.

Vladimir and Vera Torchilin’s collection started with Vladimir’s parents, who lived in Moscow and were friendly with several notable Soviet artists, including some who were Jewish. Vladimir began his collecting as a bibliophile, an interest that coincided with his love of writing poetry and prose—he is the author of numerous novels, volumes of short stories and essays. The Torchilins moved to the U.S. in the early 1990s and after the fall of the Soviet Union were successful in bringing out a large portion of their families’ collection, to which they have continued to add voraciously. Their collection as a whole primarily focuses on Russian and Soviet art, not only by creators of Jewish heritage, but also by European and American artists. They also continue to collect rare books, mostly in Russian.

The Collectors and Curator

Dr. Vladimir Torchilin is a leading biochemist, pharmacologist and specialist in nanomedicine, author of 450 scientific papers and holder of over 40 patents. He is currently University Distinguished Professor at Northeastern University and director of its Center for Pharmaceutical Biotechnology and Nanomedicine. He is the recipient of numerous awards and honors, including the Lenin Prize of the USSR in Science and Technology (the highest scientific award in the former USSR). Vera Torchilin worked in wealth management, finishing her career as a second vice president at Morgan Stanley Smith Barney.

Anna Winestein is an historian of art and theater, independent curator and cultural entrepreneur. She is executive director and co-founder of the Ballets Russes Arts Initiative, a Boston-area non-profit that follows in the tradition of Diaghilev’s Ballets Russes by promoting international creative exchange in the fine and performing arts, especially with the post-Soviet region.