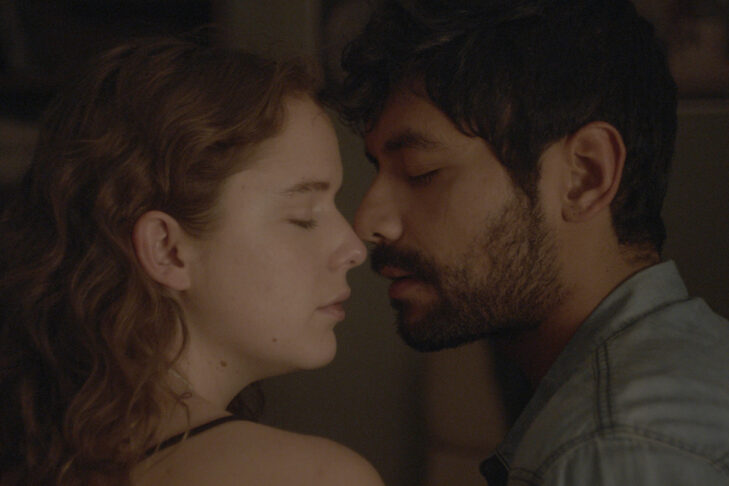 “Leona,” an indie drama set in the Syrian Jewish community in Mexico City, begins and ends in the water. In the opening scene, the main character, Ariela, participates in a close friend’s immersion in the mikveh, or ritual bath, prior to the young woman’s wedding. There are plenty of congratulations and blessings for the bride and hopeful wishes for Ariela’s marital prospects.

However, as soon as Ariela leaves the mikveh, she quickly changes clothes in her car. She exchanges her formal dress for jeans, T-shirt and sneakers. This outfit signals that this is the real Ariela, a 25-year-old artist who paints impressive murals on the facades of local buildings. Her work takes her out of the upper-class neighborhoods of Mexico City where her Syrian Jewish family lives and into the more bohemian sections of the city.

Working downtown is a respite for Ariela, who often feels stifled by her community’s expectations. Syrian Jewish girls are expected to marry young and to marry Syrian Jewish men. Furthermore, the community divides along sectarian lines of those who immigrated to Mexico from Damascus or Aleppo. Arriving in the early part of the 20th century to escape persecution and civil war, the Syrian Jewish community prospered in Mexico as they single-mindedly maintained their traditions and a tight-knit society. Most Ashkenazi Jews immigrated to Mexico after the Russian Revolution in 1917, and unlike their Syrian counterparts, the community was not as cohesive.

Shabbat dinners for Ariela at her grandmother’s house often include cross-examination of her social life. Her divorced mother, herself dating Syrian Jewish men who disappoint her, is concerned about her only child. Ariela refuses attempts to set her up with potential suitors, determined to transcend societal expectations and gender norms. It’s not surprising that she eventually tests her family’s limits when she dates someone who is not Jewish.

Ariela meets Ivan on the street while painting one of her murals. The two flirt and eventually become involved, but Ariela and Ivan’s relationship is doomed from the start. Director Isaac Cherem, a Syrian Jew from Mexico City, brings first-hand knowledge of the Syrian Jewish community to his story. Cherem’s film, co-written with Naian Gonzaléz Norvind, who plays Ariela, is not a typical Romeo and Juliet story. It’s more nuanced as Ariela struggles to navigate the entrenched cultural expectations of her family and her insular Jewish society—a double-edged challenge for Ariela as a woman and a Jew.

As the couple falls more in love, Ariela moves closer to making the fateful decision to stay close to her disapproving family or her Mexican Catholic boyfriend. While painful, Ariela’s choices are not clear-cut, and she initially resists familial pressure to break up with Ivan. Her parents call in the community’s elders to emphasize that her transgression of clan rules has grave consequences. A rabbi recounts a familiar trope about her ancestors’ arrival in Mexico City. They were poor and worked together to prosper. “Unity,” the rabbi tells her, “is our trademark.”

Ivan grows impatient with Ariela’s excuses for not introducing him to her family. He doesn’t understand that they would reject Ariela for bringing him to a Shabbat dinner. The shunning eventually happens as Ariela’s mother kicks her out of her house. Her wealthy father, though somewhat sympathetic, supports his ex-wife’s decision. Her grandmother is the most understanding in the family. When she was a teenager, she fell in love with a man who was not Jewish, and she was quickly married off at 15 to an older man her parents chose for her. “It’s not about love,” she tells her heartsick granddaughter. It is about duty and acceptance of one’s fixed place in the community at any price.

The pressure is too much for the young couple, and they separate. Single again, Ariela goes on a series of disappointing dates. The encounters spotlight the paradoxes of assimilation and the double life that Jews often lead. Ariela’s dates invite her to non-kosher restaurants as they avoid ordering pork and shellfish. Pop culture and all things American fascinate them. Throughout her dates, Ariela misses Ivan, even when she becomes interested in Gabriel. The two grow closer until Gabriel suggests that Ariela give up her life as a street artist when they marry.

Ariela fiercely clings to her hard-won independence. In one of the film’s last scenes, she is on a scaffold and paints the word “leona” in bold strokes of black paint that accompanies the stunning image of a woman. Leona in Spanish means “lioness,” and Ariela in Hebrew means “the lion of God.” It’s a fitting name for a young woman who has the strength and determination of a lioness. In the end, Ariela improvises a private mikveh ceremony in the bathtub of her apartment, making it clear that she is firmly in charge of her life.