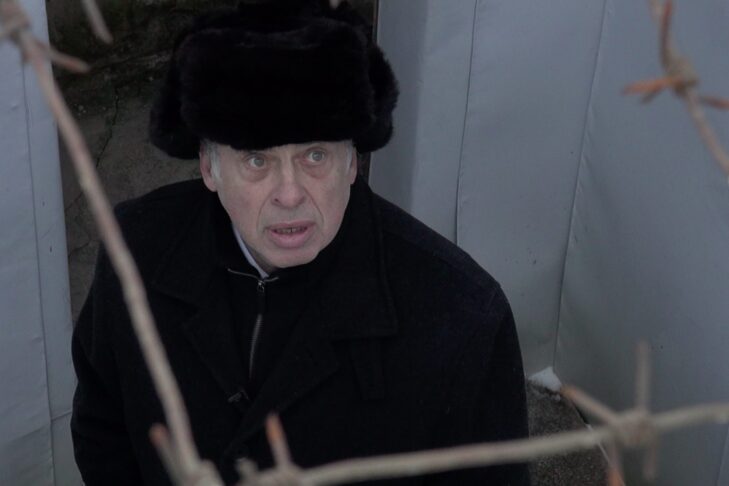 Natan Sharansky in “From Slavery to Freedom” (Promotional still)

Natan Sharansky was the face of the Soviet Jewry movement of the 1970s and ‘80s. In 1977 he was found guilty of high treason and spying for the CIA in a Moscow court. He served nine years of his 13-year sentence, much of it in solitary confinement. In his statement to the court, he told the judges that Jews traditionally say “Next year in Jerusalem” at various times of the year; he went on to say he, too, would go to Jerusalem.

Sharansky eventually reached Israel in February 1986 after he was released in a prisoner exchange. He walked toward freedom on the famous “Bridge of Spies” that connected East and West Berlin. For years, Sharansky was a cause célèbre throughout the Jewish world and beyond due mainly to the efforts of his wife, Avital.  The couple had married in a secret Jewish ceremony in 1974, the day before Avital left the Soviet Union for Israel. The decision to part from her husband was not an easy one for her, but understanding that he would eventually be arrested, Sharansky insisted she leave.

Once in Israel, Avital wasted no time in bringing attention to her husband’s plight. She kept Sharansky’s story in the public conscious. Their love story anchors the new film “From Slavery to Freedom,” the Boston Jewish Film Festival’s mid-festival selection, which screens in Brookline on Wednesday, Nov. 13, and Thursday, Nov. 14.

The standout film documents Sharansky returning for the first time to the Soviet Union in 2017. The former refusenik revisits key places in his life, such as his cell in the now-shuttered Vladimir Central Prison. He recalls how he endured frigid conditions and starvation rations. He explains how he exchanged messages with the prisoner in the cell next to his by talking through the toilet. Sharansky muses it was a more reliable method of communication than a telephone.

Sharansky would go on to become a prominent politician in Israel and one of the founders of Yisrael B’Aliyah, a party that promoted the integration of Russian Jews into Israeli society. He also assumed several ministerial positions in the government. He then went on to serve as chairman of the executive of the Jewish Agency until 2018.

Interspersed with affecting scenes of Sharansky in modern-day Russia is footage of him from the ‘70s and ‘80s, along with testimonials and interviews with key refuseniks, European and American activists and U.S. officials serving at the time. Stuart Eizenstat, who served as President Jimmy Carter’s chief domestic policy adviser and would later serve as ambassador to the European Union in the mid-1990s, is featured. In addition to recounting the history of the period, Eizenstat helpfully contextualizes the Cold War tactics happening between the United States and the former Soviet Union.

Avital Sharansky, however, emerges as the quiet, reluctant hero of her husband’s story. A shy, unassuming woman who never sought the spotlight, she nevertheless stepped onto the world stage to press her husband’s case with religious and political leaders. She traveled the globe to ensure that Sharansky would not be forgotten. The soft-spoken and guarded Avital breaks her silence in the film to share poignant anecdotes about her dogged pursuit of her husband’s freedom. At one point, she recalls meeting President Ronald Reagan in Washington. She directly addressed the president even as he tried to brush off her handshake. “I held on,” she said. “The photo [of that moment] was everywhere the next day.”

Avital also reckoned with what one American diplomat sarcastically dubbed “Sharansky fatigue.” At one point, it seemed the media would continue to be interested in the Jewish refusenik only if he died. But Sharansky lived, and when he and Avital had their emotional reunion in Germany, Sharansky recalls that he said to his wife, “I’m sorry I kept you waiting.”

In one of the final scenes of the film, a young Avital is in a car in Israel in the late 1970s. She’s asked about her future, and she timidly smiles and says she wants to reunite with her husband. She wants to live in Israel with her children and go through the intimate routines of family life. The scene then cuts to the present day, where Avital and Sharansky are playing at home with their grandchildren. Avital says she looks back on her years of yearning and advocating for her husband “through a sea of hatred, a sea of love. For me, it was just one long day that finally ended.”