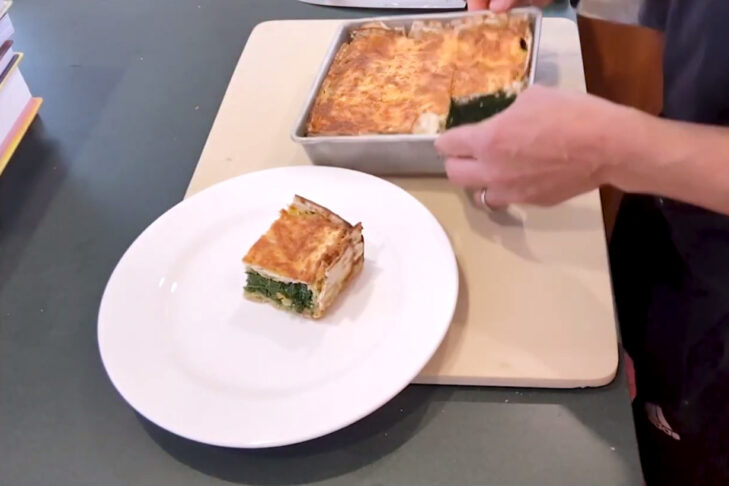 Early in the Passover seder, participants point to the matzo and say: “This is the bread of affliction that our ancestors ate in the land of Egypt. Let all who are hungry come and eat. Let all who are needy come and celebrate Passover.” It’s a segue into remembering our ancestors’ suffering during the Exodus and the Jewish value of opening one’s home to feed those less fortunate than we are. The Ladino translation of these words is etched in my mind and soul. At every seder of my childhood, my mother and aunt stood up and proudly sang a beautiful lilting Sephardic melody featuring the words.

Here’s what they sang in Ladino:

Ladino’s resemblance to Spanish harkens back to the Golden Age of Sephardic Jewry in Spain. It is to Spanish what Shakespearean English is to modern English. Ladino, however, also has Portuguese, Dutch, Hebrew and Arabic words. This unique stew of languages reflects the myriad countries of the Sephardic Jewish diaspora. Similarly, Sephardic cuisine is a rich mix of flavors incorporated from places like Portugal, the Netherlands, the Balkans, the Isle of Rhodes, the Middle East and Moorish Spain.

The humble matzo has also evolved since it was designated as “the bread of affliction” in the Haggadah. Although indelibly associated with the Israelites fleeing Egypt with no time for their loaves of bread to rise, matzo has enjoyed a culinary renaissance in recent decades. It makes for a sweet dessert when covered in caramel or chocolate. Ground into meal, it’s the basis of matzo balls that, depending on tastes and family traditions, are either light and fluffy or dense enough to sink.

Cooks throughout the Sephardic diaspora have used matzo to make layered and savory matzo pies called mina. Chef Michael Leviton recently demonstrated how to make mina in a virtual event hosted by Jewish Arts Collaborative (JArts). The event, part of the Kitchen Explorations series by JArts, originated with Leviton’s interest in telling Jewish stories within the context of food. In partnership with The Wyner Family Jewish Heritage Center and The Vilna Shul, Leviton had access to a rich archive of recipes from Jewish families in Massachusetts.

In a 30-minute cooking demonstration laced with commentary, Leviton took viewers through the steps of making mina. He made a dairy version of the dish that included amplifying the flavor with pecorino cheese. After soaking the matzo and cooking the spinach, he made an egg-and-cheese mixture, creating something akin to a Sephardic-Ottoman-kosher-for-Passover lasagna.

There are mina fillings that include lamb and beef generously spiced with fresh herbs. There are also vegan and vegetarian mina recipes that use eggplant and other vegetables. Newton resident Becky Behar Mekler’s father and maternal grandparents were born in Istanbul. Behar Mekler grew up in Bogotá, Colombia, until she was 6, and then lived in Miami until college. In the tradition of many creative home cooks, she eyeballs the ingredients for her mina (see the recipe below), which includes a top layer of whipped potatoes, egg whites and cheese. She said she still makes mina for Passover and serves it with honey, a tradition in her family.

Fran Putnoi’s ancestors fled Spain during the Inquisition and eventually emigrated to Izmir, Turkey, by way of Italy. Putnoi was recently profiled in The Boston Globe’s food pages, which featured her recipe for mina de carne. As the name implies, her mina has a meat filling. Putnoi, who lives in Cambridge, remembers her Sephardic grandparents conducting long seders in Ladino in their Upper West Side apartment.

Whatever the mina filling, the matzo “pie” is always layered in between at least three matzo sheets that have been softened with water. Some recipes call for glazing the top layer with an egg wash. Cooking times vary according to the other ingredients, but in the end, the result is the same. Matzo that is the main ingredient in recipes like mina is much more appealing than “the bread of affliction that our ancestors ate in the land of Egypt” (“el pan de lay afrisyon ke comyeron muestros padres en tierra de Ayifto“).

3.5.3208
Never miss the best stories and events! Get JewishBoston This Week.
Filed Under: