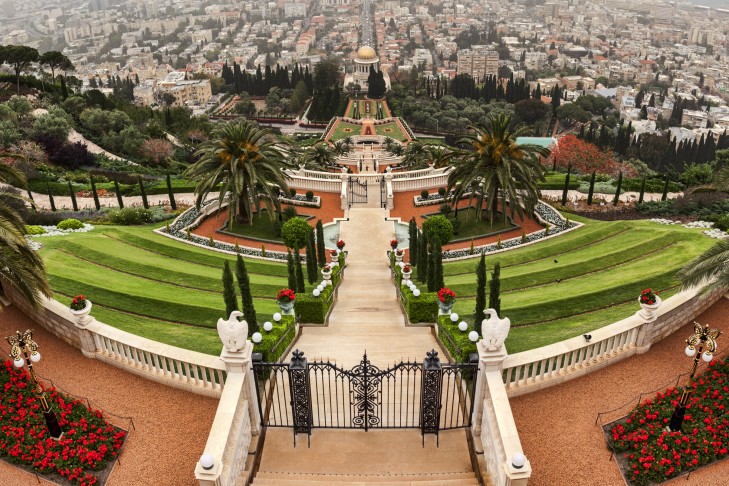 Haifa, the city of coexistence. The name is fitting on first glance. Walking down the Carmel Mountain on which the city is built, we passed a full spectrum of religions, cultures and backgrounds. Strolling through the German colony, we saw a Seventh Day Adventist church next to a Chabad house, next to the Baha’i Welcome Center. We drank Turkish coffee, snacked on some Arab pastries and of course ate some hummus and falafel. We transitioned seamlessly from the German Colony into Wadi Nisnas, an Arab village preserved in the heart of the bustling city. The village ends at the port, where cargo from all over the world is brought to the Middle East. When we walked the streets of Haifa, I could not help but hope for a future of peace and coexistence. At the end of our tour, the guide told us that Hatikvah, the national anthem of Israel, which means “hope,” was composed in Haifa.

There is no better symbol of hope for peace then the Baha’i Gardens beautifully set into the steep mountain slope. The Baha’i is a religion that promotes peace and equality above all else. Their members come from all over the world, and are united under a mission of bringing world peace. The garden is meticulously well maintained by over 500 volunteers, and is breathtaking; it is a perfect juxtaposition of natural beauty and human design. Our tour guide took us down the mountain through the garden, pausing at each one of the 18 terraces to tell us more about the history and beliefs of the Baha’i. I was inspired by their clear message of justice, and it resonated very strongly with my own Jewish beliefs in tzedek and tzedakah, righteousness and charity.

However, toward the bottom of the mountain, the spell that Haifa has woven began to show a small tear; the tour guide asked us if we knew which country had no permanent Baha’i community. My first guess was Iran, because the Baha’i had been exiled from Persia shortly after their formation. However, the answer was Israel. The reason was not because the Israeli government did not allow them to settle, but because the Baha’i forbid themselves from settling. They feel that their extreme pacifism does not have a permanent home in the Holy Land because of the bloodshed caused by others claiming the Holy Land solely for themselves. This fact struck me deeply—even in the city of coexistence, the religion of coexistence keeps their distance. It reminded me of the tremendous amount of work that needs to be done before peace can be achieved. Haifa is a step in the right direction, but it is far from the finish line. However, Haifa reminds us not to give up.

Haifa, the city of hope.

Ronit Langer is an electrical engineering and computer science student at MIT.