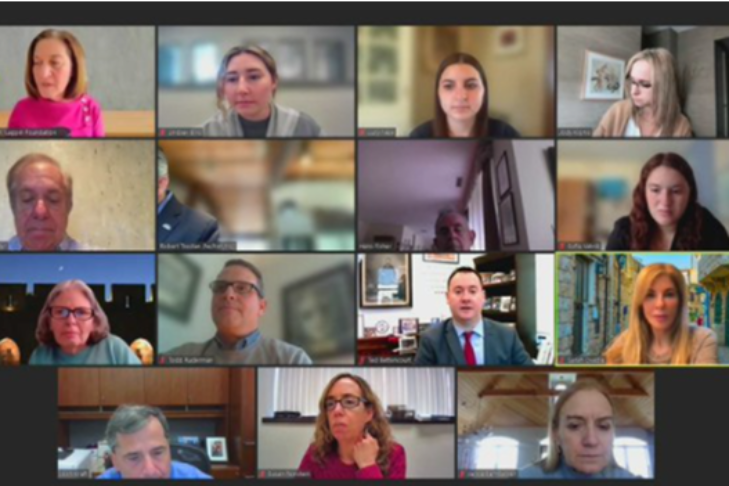 On March 28, Lappin Foundation’s “Two Steps Forward Against Antisemitism Summit” brought together 168 Massachusetts municipal leaders representing 108 cities and towns across the commonwealth to explore ways to stand up to the growing threat of antisemitism.

“For communities to combat antisemitism, they must first understand it,” Lappin Foundation executive director Deborah Coltin told the leaders at the summit. “Educating the community is the best way to stop hate from continuing.” A survey done by the Claims Conference found a significant lack of Holocaust knowledge in the United States. A significant majority of American adults believe that fewer people care about the Holocaust today than they used to, and more than half of Americans believe the Holocaust could happen again.

The purpose of the event was to educate the officials on two important steps communities can take to combat antisemitism. The first is adopting the International Holocaust Remembrance Alliance (IHRA) non-legally-binding working definition of antisemitism (what does it mean, why it’s important and how to use it).

“What this does is provide a common framework for constructively dealing with antisemitism,” said Robert Leikind, regional director of American Jewish Committee New England. “It establishes guideposts that can be used to interpret and navigate antisemitic incidents, facilitate important conversations and help advance the creation of responsible approaches to the problem.” Robert Soffer, a community activist who helped make Sharon the first municipality in Massachusetts to adopt IHRA’s working definition of antisemitism, also spoke at the summit. “When antisemitism grows, eventually so do other forms of intolerance and hate. Ultimately, everyone in society suffers,” Soffer said. Massachusetts Gov. Charlie Baker endorsed the IHRA definition on Feb. 18.

The second step recommended at the summit is for cities and towns to commemorate International Holocaust Remembrance Day on Jan. 27 each year so the lessons of the Holocaust, including the dangers of antisemitism and hate, are not forgotten. “By honoring the victims and survivors, we recognize the value and dignity of each person, “said Peabody Mayor Edward Bettencourt, who was the honorary chair of the event. His city of Peabody marks International Holocaust Remembrance Day annually.

Holocaust survivor Dr. Hans Fisher talked about why experiences like his must never be forgotten. “The Holocaust could not have happened if people had spoken up. You can’t sit by quietly. You must let your voice be heard,” said the now 94-year-old Newton resident who, at the age of 11, was one of 937 passengers aboard the MS St. Louis, which left Germany in 1939 to escape escalating antisemitism. It returned to Europe after it was turned back by the Cuban government and neither the U.S. nor Canada would accept the passengers.

Marblehead teens Sofia Vatnik and Lucy New—co-chairs of the Teen Antisemitism Task Force—were the two youngest speakers at the event. New told the audience at the summit about the chilling effect antisemitic graffiti found at a Marblehead elementary school had on young children at her synagogue. “No student should be scared to go to school because of their identity,” she noted. “We must all work together to ensure that every community member feels welcomed, appreciated and, most importantly, safe.”

Vatnik’s parents experienced antisemitism before they immigrated from Russia to the U.S. in the early 1990s. “Here in the United States, we can openly practice Judaism, not be turned away from a job because of a religious belief and live a life of freedom,” she said. “However, we can no longer wait until an antisemitic incident occurs to act. We must be as proactive as we are reactive.”